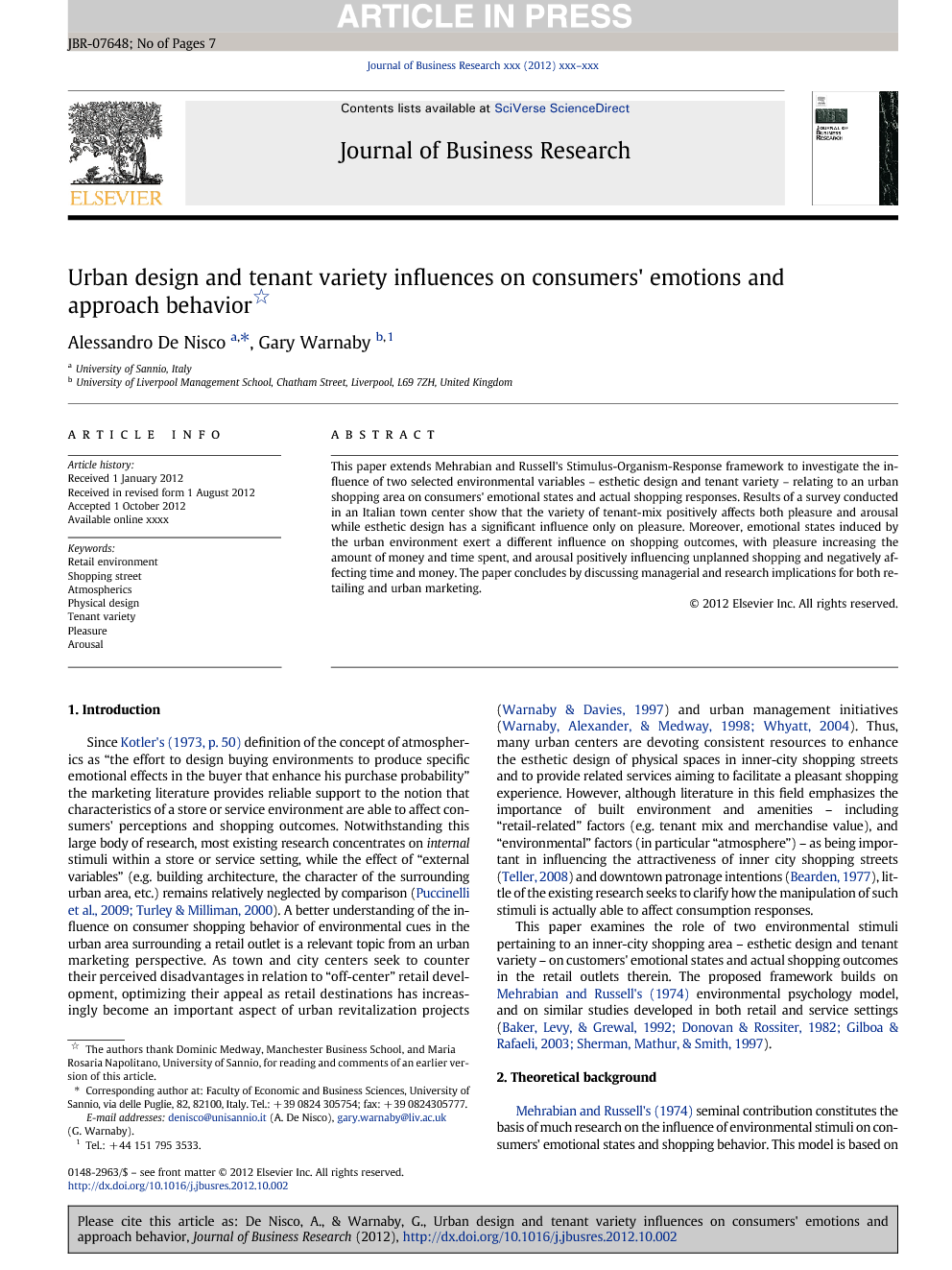 This paper extends Mehrabian and Russell's Stimulus-Organism-Response framework to investigate the influence of two selected environmental variables – esthetic design and tenant variety – relating to an urban shopping area on consumers' emotional states and actual shopping responses. Results of a survey conducted in an Italian town center show that the variety of tenant-mix positively affects both pleasure and arousal while esthetic design has a significant influence only on pleasure. Moreover, emotional states induced by the urban environment exert a different influence on shopping outcomes, with pleasure increasing the amount of money and time spent, and arousal positively influencing unplanned shopping and negatively affecting time and money. The paper concludes by discussing managerial and research implications for both retailing and urban marketing.

Since Kotler's (1973, p. 50) definition of the concept of atmospherics as “the effort to design buying environments to produce specific emotional effects in the buyer that enhance his purchase probability” the marketing literature provides reliable support to the notion that characteristics of a store or service environment are able to affect consumers' perceptions and shopping outcomes. Notwithstanding this large body of research, most existing research concentrates on internal stimuli within a store or service setting, while the effect of “external variables” (e.g. building architecture, the character of the surrounding urban area, etc.) remains relatively neglected by comparison ( Puccinelli et al., 2009 and Turley and Milliman, 2000). A better understanding of the influence on consumer shopping behavior of environmental cues in the urban area surrounding a retail outlet is a relevant topic from an urban marketing perspective. As town and city centers seek to counter their perceived disadvantages in relation to “off-center” retail development, optimizing their appeal as retail destinations has increasingly become an important aspect of urban revitalization projects (Warnaby & Davies, 1997) and urban management initiatives ( Warnaby et al., 1998 and Whyatt, 2004). Thus, many urban centers are devoting consistent resources to enhance the esthetic design of physical spaces in inner-city shopping streets and to provide related services aiming to facilitate a pleasant shopping experience. However, although literature in this field emphasizes the importance of built environment and amenities – including “retail-related” factors (e.g. tenant mix and merchandise value), and “environmental” factors (in particular “atmosphere”) – as being important in influencing the attractiveness of inner city shopping streets (Teller, 2008) and downtown patronage intentions (Bearden, 1977), little of the existing research seeks to clarify how the manipulation of such stimuli is actually able to affect consumption responses. This paper examines the role of two environmental stimuli pertaining to an inner-city shopping area – esthetic design and tenant variety – on customers' emotional states and actual shopping outcomes in the retail outlets therein. The proposed framework builds on Mehrabian and Russell's (1974) environmental psychology model, and on similar studies developed in both retail and service settings (Baker et al., 1992, Donovan and Rossiter, 1982, Gilboa and Rafaeli, 2003 and Sherman et al., 1997).

This study considers the effect of wider external stimuli in the urban environment surrounding a store by investigating the relationship between two environmental factors related to an urban shopping street – esthetic design and tenant variety – and consumers' emotional reactions and approach behavior. Results show that although the role of atmospheric stimuli external to the store has been neglected within existing research, this element of the environment plays a substantial role in influencing consumers' affective perceptions and actual shopping outcomes. Namely, a wide assortment of stores, food and entertainment facilities into an inner-city shopping street exerts a positive effect on both pleasure and arousal, while the esthetic design of urban facilities, interestingly, seems to have a weaker influence and affects only pleasure. The study makes a contribution to urban place marketing literature. While literature acknowledges the importance of the built environment as a means of place differentiation (Turok, 2009 and Warnaby and Davies, 1997) and recent research on inner-city shopping streets show that variety of retail and non-retail tenants and physical atmosphere are the most crucial factors in influencing overall attractiveness (Teller & Reutterer, 2008) and satisfaction (Teller, 2008), the relative impact of urban environmental characteristics on actual approach or avoidance response is not clear. This study is the first to use environmental psychology in order to provide insights into how stimuli experienced at the urban setting influence customer emotions and shopping outcomes. By considering the role of two sets of environmental stimuli, the study also contributes to retail literature based on environmental psychology in that the proposed model detects a previously unexplored positive relationship between tenant variety and pleasure and confirms the relationship between tenant variety and arousal, consistent with results provided by Wakefield and Baker (1998) within a different retail setting. Moreover, it finds that design factors do not affect arousal (only pleasure), contradicting results provided by Wakefield and Baker (1998) and Wakefield and Blodgett (1999). This difference may be due to the unusual context of this research. Finally, the study also provides additional insights regarding the influence of consumers' emotional states on actual purchasing behavior. The SEM estimates show that a pleasure-inducing urban environment is positively related to both time and money spent in the area, but not to the number of products purchased. On the other hand, there is a partially positive correlation between arousal and unplanned purchases and, contrary to predictions, a negative correlation with time (fully significant) and money spent in the shopping street (partially significant). This overall pattern of results seems to suggest that in a high-pleasure urban environmental context consumers are more willing to shop for high involvement products, which encompass important goals – as in the case of luxury or high-risk goods – and require more complex decision-making in terms of time and money. Conversely, a high-arousal urban location appears to be more consistent with low involvement buying behavior, where consumers browse for lower-priced products and sales promotions, with the minimum expense of money and physical effort (Laurent and Kapferer, 1985 and Zaichkowsky, 1987). As a consequence, although this study does not consider shopping motives as an organism factor, the overall pattern of results seems compatible with previous research stating that motivational orientation moderates the effect of emotional states inducted by the environment on shopping behavior (Dawson et al., 1990 and Kaltcheva and Weitz, 2006).