عنوان انگلیسی
The dark side of financial innovation: A case study of the pricing of a retail financial product
دانلود فوری مقاله + سفارش ترجمه 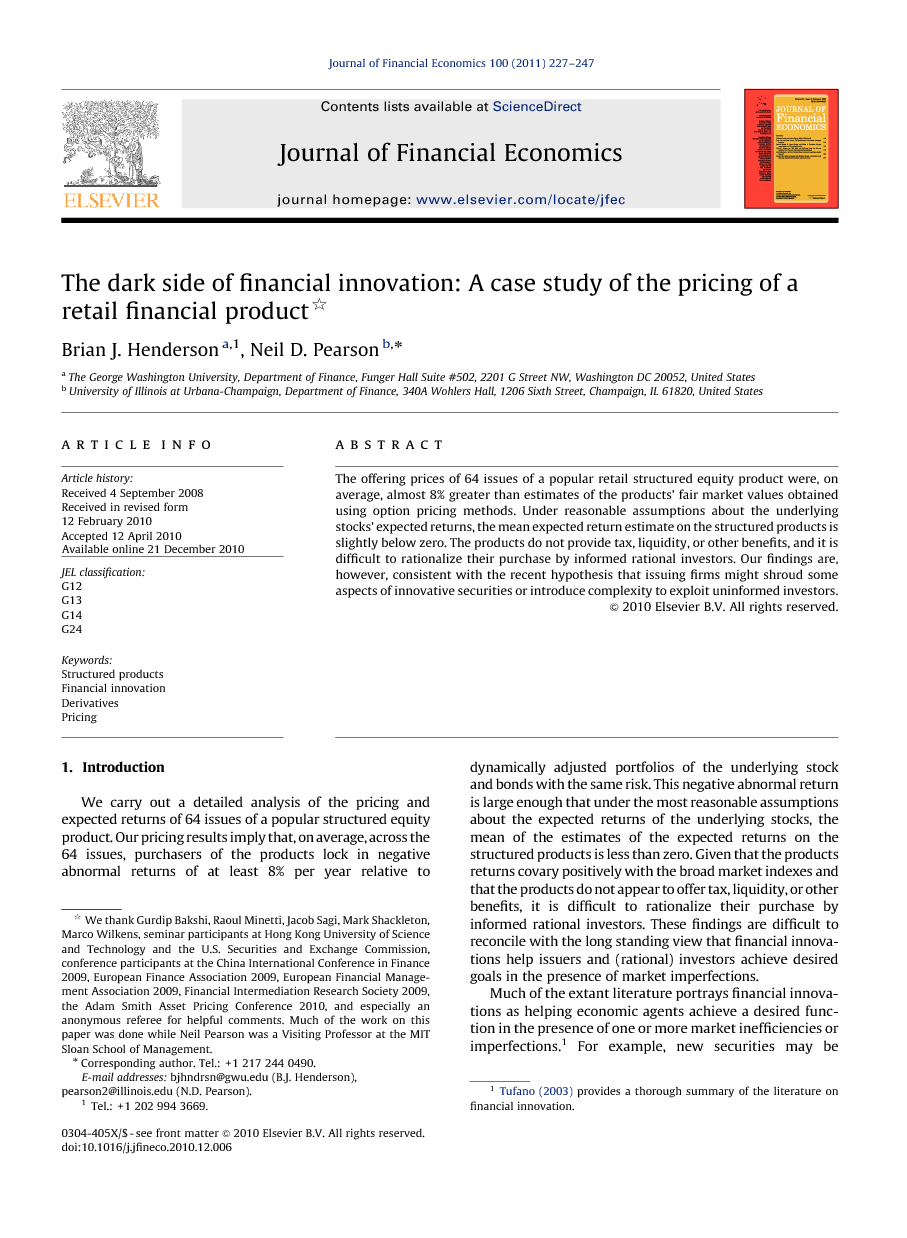 The offering prices of 64 issues of a popular retail structured equity product were, on average, almost 8% greater than estimates of the products' fair market values obtained using option pricing methods. Under reasonable assumptions about the underlying stocks' expected returns, the mean expected return estimate on the structured products is slightly below zero. The products do not provide tax, liquidity, or other benefits, and it is difficult to rationalize their purchase by informed rational investors. Our findings are, however, consistent with the recent hypothesis that issuing firms might shroud some aspects of innovative securities or introduce complexity to exploit uninformed investors.

We present evidence that the initial offering prices of SPARQS, the most popular of the publicly offered U.S. retail structured equity products, include “markups” or premiums large enough that the SPARQS have expected returns less than the riskless rate. What conclusions should one draw from this? Due to marketing costs, the offering prices of virtually all retail financial products must include premiums over estimates of their fair values. The equal- and value-weighted average commissions on the sample of SPARQS are 1.71% and 1.76%, respectively, so commissions alone would imply average premiums of this magnitude. In addition to these marketing costs, Morgan Stanley incurs transactions costs in hedging its liabilities on the SPARQS, pays fees associated with registering the securities and listing them on an exchange, and must also recover the staffing and other costs that go into designing, modeling, and valuing the SPARQS. Thus, conditional on existing, the SPARQS must be sold at considerable premiums over their model values. The interesting finding is that the markups are large enough, and the times to maturity or call short enough, that reasonable estimates of the expected returns on the SPARQS are less than the riskless rate. For the estimates of expected returns on the underlying stocks that seem most reasonable, the average expected return on the SPARQS is actually negative. In a standard model of portfolio choice, securities with expected returns less than the riskless rate are rationally purchased by investors only if their returns covary positively with the investor's marginal utility (Merton, 1982). The returns of the SPARQS covary positively with the broad market indexes, and for the vast majority of investors, almost certainly covary positively with consumption and negatively with marginal utility. Thus, the finding that SPARQS expected returns are less than the riskless rate makes it difficult to rationalize purchases of SPARQS by investors who hold portfolios that are positively correlated or uncorrelated with the broad market indexes. In light of this, the fact that investors buy SPARQS, and thus the existence of these securities, is a puzzle. It seems unlikely that SPARQS satisfy any hedging needs of retail investors. The payoffs of SPARQS are qualitatively similar to those of covered calls and, with the exception of naked puts, it is difficult to think of a position likely held by many retail investors for which a purchased SPARQS is a reasonable hedge. SPARQS are callable by the issuer at a time-varying schedule of call prices, decreasing their usefulness in hedging even those positions such as naked puts for which at first glance they might seem to be useful hedges. Setting aside specific arguments about what positions are or are not naturally hedged by SPARQS, in order to believe that SPARQS are designed to satisfy investors hedging needs, one would need simultaneously to believe that the investors who purchase SPARQS (i) are sophisticated enough to understand that SPARQS hedge the position that they have, and to manage the call risk; but (ii) are too unsophisticated to be aware that the underlying common stock and exchange-traded options on it provide alternative fairly priced hedging vehicles. SPARQS also appear not to be motivated by any desire to benefit from a preferential tax treatment, circumvent regulations, reduce agency conflicts, or reduce transactions costs. Thus, we cannot identify benign reasons for Morgan Stanley to structure and issue SPARQS. Because SPARQS expected returns are less than the risk-free rate, to the extent that SPARQS investors have marginal utilities that covary negatively with the SPARQS, they would have been better off investing in bank certificates of deposit. In fact, because the most plausible estimates of the SPARQS expected returns are negative, most SPARQS investors would likely have been better off investing in non-interest bearing accounts. Such strong statements cannot be made about many other retail financial products. For example, SEPs with longer times to maturity might not have expected returns less than the riskless rate. SPARQS issuances are, however, consistent with recent theoretical literature advancing the idea that firms shroud some aspects of the terms on which their products are offered in order to exploit uninformed consumers (Gabaix and Laibson, 2006), and deliberately create complexity to reduce the proportion of investors who are informed (Carlin, 2009). In these equilibria, prices are higher than they would be if consumers or investors were fully informed, implying that returns are lower than they otherwise would be. The overpricing of SPARQS is also consistent with the hypothesis that banks and investment banks design financial products to exploit investors misunderstandings of financial markets, cognitive biases in evaluating probabilistic information, and framing effects. For example, Shefrin and Statman (1993) argue that narrow framing and loss aversion19 can cause investors to demand positions that are similar to covered calls, and also make investors value a single security that provides these payoffs more highly than a portfolio of other securities that produces an equivalent payoff. This dark side of financial innovation is in stark contrast to the generally benign view of financial innovation that has been a traditional focus of the literature. The demand for SPARQS is also consistent with overconfidence, if an overconfident investor is one who believes that future returns are distributed narrowly around their expected outcome (Kyle and Wang, 1997; Daniel, Hirshleifer and Subrahmanyam, 1998; Odean, 1999). Such an investor will overvalue SPARQS because he or she will undervalue the embedded written call. Overconfidence by itself, however, does not provide an explanation of why investors might prefer SPARQS to covered call positions created using exchange-traded call options.