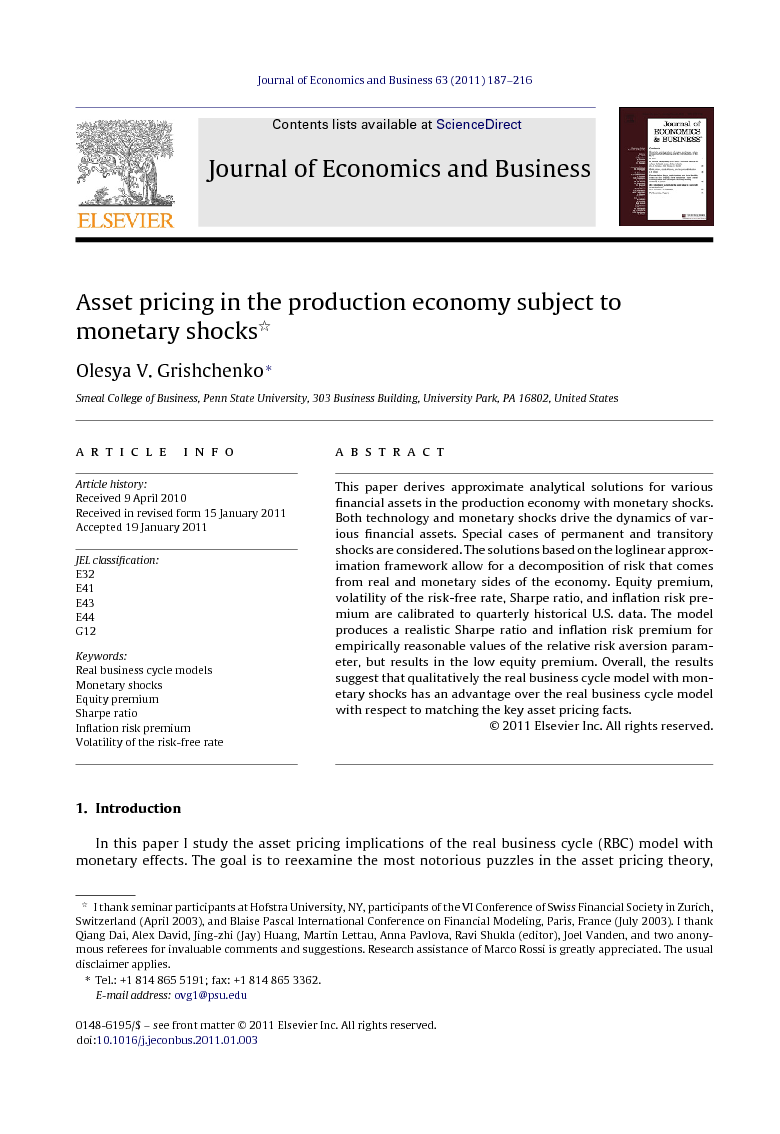 This paper derives approximate analytical solutions for various financial assets in the production economy with monetary shocks. Both technology and monetary shocks drive the dynamics of various financial assets. Special cases of permanent and transitory shocks are considered. The solutions based on the loglinear approximation framework allow for a decomposition of risk that comes from real and monetary sides of the economy. Equity premium, volatility of the risk-free rate, Sharpe ratio, and inflation risk premium are calibrated to quarterly historical U.S. data. The model produces a realistic Sharpe ratio and inflation risk premium for empirically reasonable values of the relative risk aversion parameter, but results in the low equity premium. Overall, the results suggest that qualitatively the real business cycle model with monetary shocks has an advantage over the real business cycle model with respect to matching the key asset pricing facts.

This paper derives approximate analytical solutions for the real business cycle model with monetary shocks. It reexamines then the aggregate asset pricing quantities such as, the equity premium, the risk-free rate volatility, Sharpe ratio, and inflation risk premium in the context of the model. The model extends growing literature on exploring asset pricing models in production economies by adding a monetary channel into the real business cycle model. The paper aims to close the gap between macroeconomic literature that studies real business cycle models with monetary effects and the literature that studies asset pricing implications of real business models without role of money in them. I contribute to the literature on the real business cycle models by showing that incorporating monetary effects provides additional important dimension that makes certain progress towards reconciling the dynamics of aggregate asset prices within full-fledged real business cycle framework. In the model households value not only consumption but also real monetary holdings. In the data, aggregate consumption and monetary aggregates are positively correlated. For this reason, increased volatility of the stochastic discount factor leads to a higher equity premium with realistic values of risk aversion than in otherwise standard real business cycle model. The driving force behind the result is non-separability of consumption and real monetary holdings in the utility function. I derive approximate analytical solutions for consumption, capital stock, price level, and asset prices using the log-linearization technique of Campbell (1994). The macroeconomic variables and asset prices are functions of the deep parameters of the model and the elasticities of endogenous variables with respect to state variables. The elasticities are computed using an extended Campbell’s method. The model is calibrated to the historical US quarterly data. Higher weight on real monetary holdings increases the importance of the monetary channel in the model and results in the higher equity premium. As expected, lower weight on real monetary holdings results in the lower equity premium, yet the latter one is twice as large than in the real business cycle model without monetary effects. The equity premium is driven not only by the covariance of consumption growth with real risky returns, but also by the covariance of monetary growth with asset returns and the covariance of inflation with asset returns. The real risk-free rate is the sum of four ARMA(2,1) processes and AR(1) process. I discuss special cases of permanent and transitory shocks. When both shocks are permanent, the risk-free rate reduces to the sum of AR(1) processes, representing the sum of technology and monetary shocks. Alternatively, when both shocks are transitory, the risk-free rate reduces to the sum of two white noise processes. Joint effect of two shocks depends on the parameter value of the relative risk aversion coefficient. It is important to note that Sharpe ratio in the model is consistent with the historical one for fairly persistent technology shock, equal weight on consumption and real money holdings, and for reasonable levels of risk aversion, that is, between 6 and 10. I also solve for the spread between nominal and real rates and obtain the estimate of the three-month inflation risk premium. Inflation risk premium depends on covariance of inflation with consumption and monetary growth. Its value obtained in the paper is close to zero, indicates a low short-term inflation risk, and in the ball park with the estimates of inflation risk premia in recent literature. Overall, these results suggest that the monetary real business cycle model has advantage over standard real business cycle models in explaining the key asset pricing facts, and therefore, the monetary channel in real business models should not be ignored.