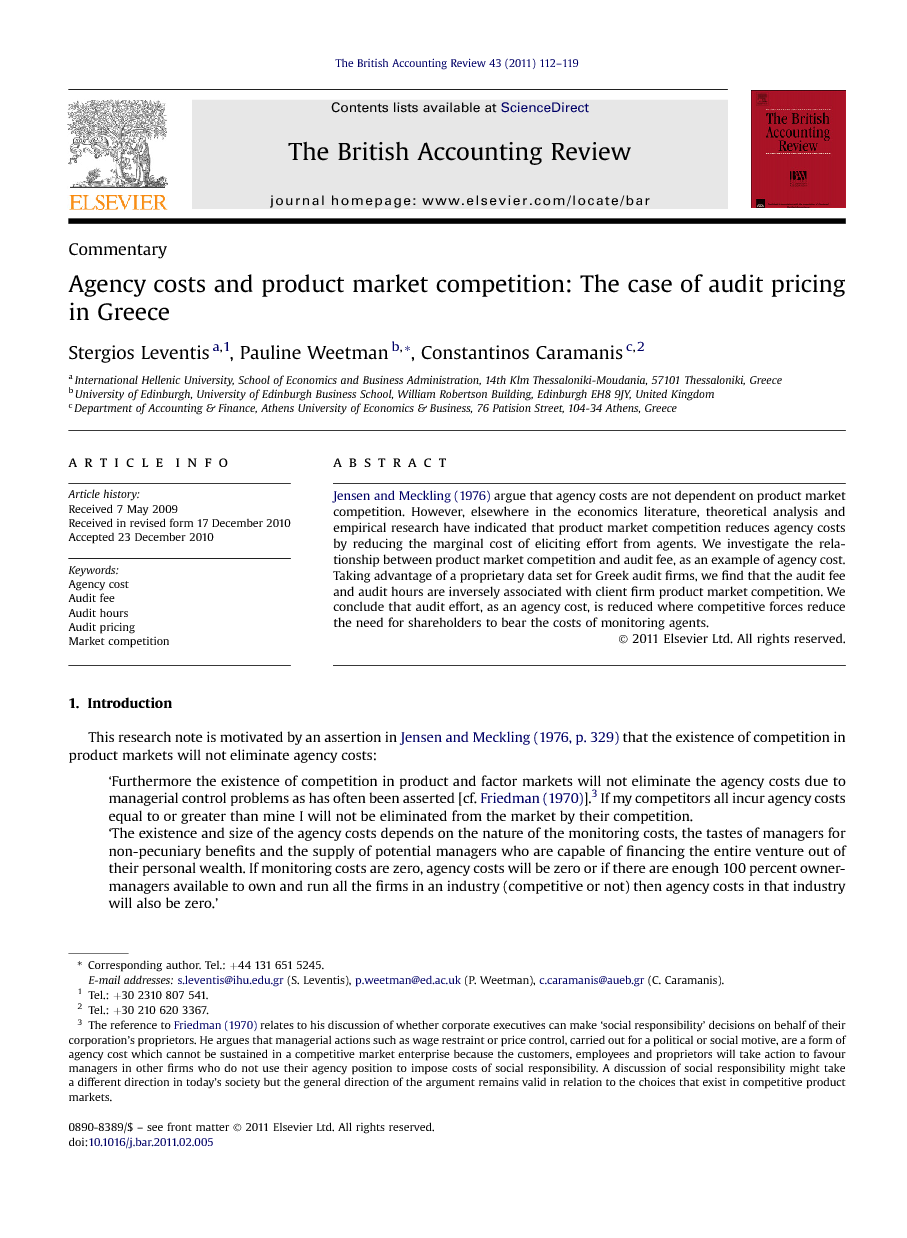 This research note is motivated by an assertion in Jensen and Meckling (1976, p. 329) that the existence of competition in product markets will not eliminate agency costs: ‘Furthermore the existence of competition in product and factor markets will not eliminate the agency costs due to managerial control problems as has often been asserted [cf. Friedman (1970)].3 If my competitors all incur agency costs equal to or greater than mine I will not be eliminated from the market by their competition. ‘The existence and size of the agency costs depends on the nature of the monitoring costs, the tastes of managers for non-pecuniary benefits and the supply of potential managers who are capable of financing the entire venture out of their personal wealth. If monitoring costs are zero, agency costs will be zero or if there are enough 100 percent owner-managers available to own and run all the firms in an industry (competitive or not) then agency costs in that industry will also be zero.’ Testing for total elimination of agency costs would require ideal conditions that are not observable in practice. However the extract quoted also implies that there is no relationship between product market competition and monitoring costs due to managerial control. In contrast, other authors have identified a potential relationship between product market competition and agency costs, as explained further in the literature review (Baggs and De Bettignies, 2007, Gal-Or, 1997, Jagannathan and Srinivasan, 1999 and Nickell, 1996). In this paper, we regard the audit fee as a specific and measurable agency cost and we investigate the extent to which the agency cost is reduced, recognising that total elimination is an unlikely observable. We ask whether increased competition in the product market is associated with reduced audit fee and also whether the reduction in audit fee is accompanied by a reduction in audit effort, measured by audit hours. We provide evidence to answer these questions using a proprietary data set available for the audit market in Greece, containing both audit hours and audit fees. Having access to data on audit time allows this paper to distinguish between a reduction in audit fee matched by a reduction in audit effort and a reduction in audit fee caused by pressure on the fee rate (‘low balling’). The motivation for our study is to test the competing claims regarding the existence or absence of an association between agency cost and product market competition. The contribution is to provide new insight into a determinant of audit fees and hence to point to policy implications for a regulator which seeks to monitor audit fees. The motivation for focussing on Greece is firstly our access to proprietary data on both audit fees and audit hours, all collected from the audit firms. Secondly, the Greek auditing profession has come under increased scrutiny over several years as a result of corporate scandals and issues related to the audit function, particularly following the collapse of the Athens Stock Exchange (ASE) in 2000–01 (Spathis, 2002). The effectiveness of the external audit function in Greece has been questioned on a number of occasions by various parties (e.g. finance institutions, investors, journalists, and politicians). In an apparent attempt to boost public trust and confidence and, at the same time, protect audit revenue, the Hellenic Institute of Certified Auditors (abbreviated in Greek as SOEL) has issued a series of regulatory guidelines on audit time. Hence issues related to audit fees have become particularly important and are on the agenda of many market participants (Leventis & Caramanis, 2005). Finally, this paper responds to calls for empirical testing of audit fees in capital markets that are not under a strong Anglo-American influence (e.g. Karim and Moizer, 1996 and Walker and Johnson, 1996). We report a significant inverse relationship between market competition and both audit fee and audit hours. We conclude that at higher levels of product market competition the monitoring costs of audit scrutiny are reduced because owners can place some reliance on product market scrutiny of management by competitors. Where there is relatively low product market competition there is less scrutiny of managers by competitors and consequently owners incur a higher monitoring cost through the audit fee. The regulation of audit in Greece is outlined in Sec. 2. Relevant prior literature is reviewed and hypotheses are developed in Sec. 3. The model and data are specified in Sec. 4. Results are reported and discussed in Sec. 5, leading to the conclusions in Sec. 6.

We have shown that, in the context of the ASE, the extent of product market competition within existing markets is inversely associated with audit fee and audit hours. Our explanation is that the reduced monitoring by the audit function is compensated through increased monitoring of management by competitors. Where there is relatively high product market competition the owners of the client firm can place more reliance on market forces to control the activities of management because the managers are under greater scrutiny from competitors. Under the same conditions the auditors will experience pressure to reduce fees. They achieve this outcome by reducing audit hours. Where there is relatively low product market competition there is less market scrutiny of managers and so the owners have to rely to a greater extent on audit assurance, reflected in a higher audit fee. Our research does not indicate the source of the pressure on auditors. It could be driven by shareholders accepting less audit effort in order to control cost and maintain profits and dividends. It could be driven by management, with similar aims of cost control to maximise the measure of their performance in terms of profit. It could be driven by the auditors themselves with the explanation that, where there is high product market competition, the auditor relies more strongly on market forces to assess business risk and so shoulders the cost of a part of the business risk through a lower fee charged to the client. We see policy implications for the Greek regulators in terms of understanding the effectiveness of audit liberalisation. The relevance of our findings for audit regulation in Greece is to provide insight into the nature of lower audit fees in competitive client firms. It might be thought by regulators that lower fees indicate a competitive audit market and hence a successful outcome for liberalisation of the audit regime. However we have shown that under conditions of product market competition the reduction in audit fee is matched by a reduction in audit hours. The explicit agency cost is reduced because part of the monitoring activity is achieved indirectly through the actions of competitors. However if the scrutiny of companies under product market competition becomes less effective, the audit quality could be at risk. The audit effort may reflect the norm for the industry but it may not reflect the most desirable level of scrutiny. We note some limitations to this study. While the sample consists of around 69% of companies listed, the sample is not entirely random and some caution would be required in generalising the results to the entire ASE population. Moreover, since 2001–2002 was a period of strong economic downturn, the results might be time specific. Additional variables might have improved the explanatory power of the model. The current research reveals the need to take account of additional client-specific contexts when audit pricing is researched. Prior research (see Chaney, Jeter, & Shivakumar, 2004) has indicated that audit pricing might suffer potential bias due to self-selection. A future study might indicate whether client product market competition causes a propensity for auditor self-selection.