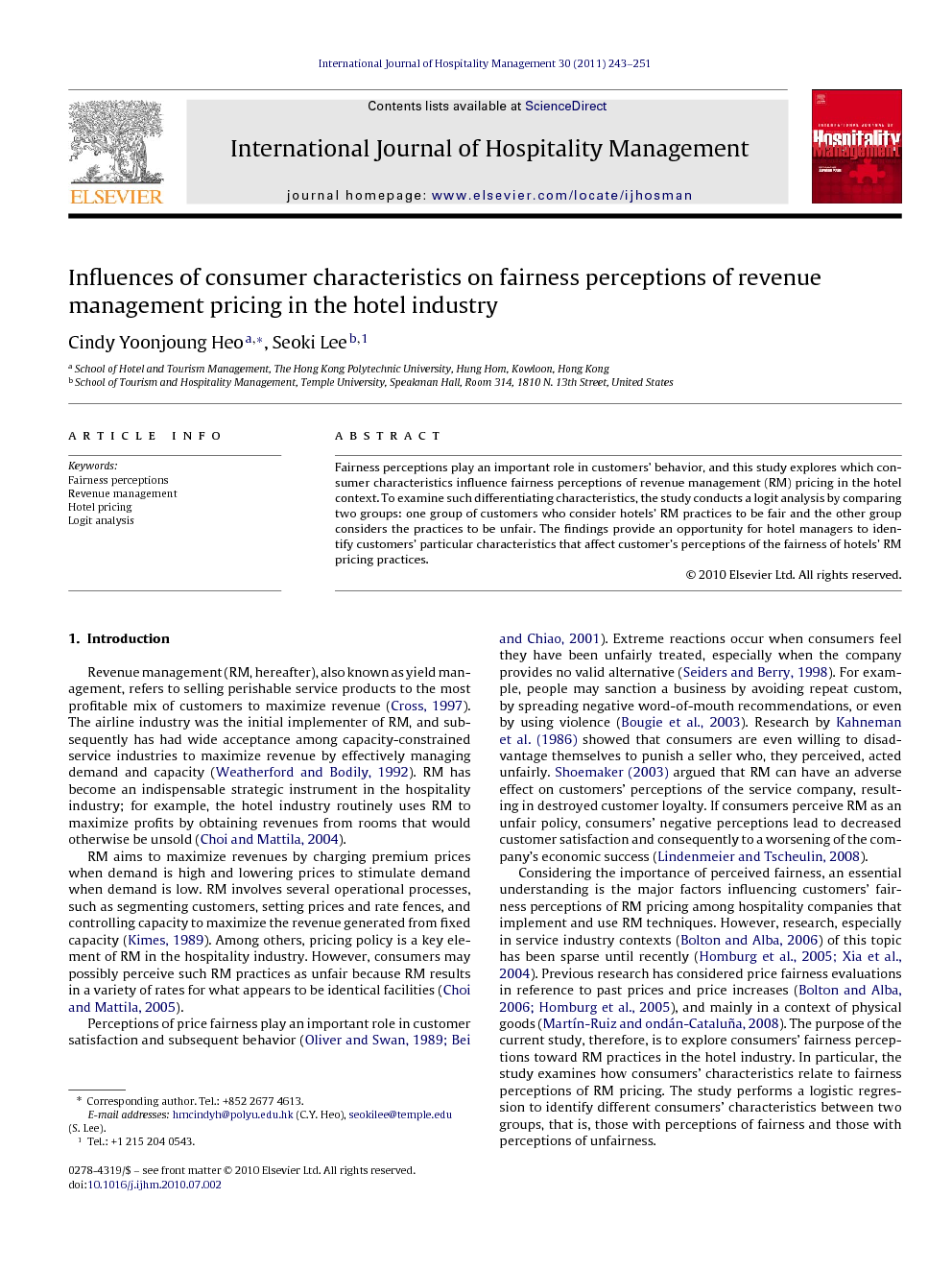 Fairness perceptions play an important role in customers’ behavior, and this study explores which consumer characteristics influence fairness perceptions of revenue management (RM) pricing in the hotel context. To examine such differentiating characteristics, the study conducts a logit analysis by comparing two groups: one group of customers who consider hotels’ RM practices to be fair and the other group considers the practices to be unfair. The findings provide an opportunity for hotel managers to identify customers’ particular characteristics that affect customer's perceptions of the fairness of hotels’ RM pricing practices.

Revenue management (RM, hereafter), also known as yield management, refers to selling perishable service products to the most profitable mix of customers to maximize revenue (Cross, 1997). The airline industry was the initial implementer of RM, and subsequently has had wide acceptance among capacity-constrained service industries to maximize revenue by effectively managing demand and capacity (Weatherford and Bodily, 1992). RM has become an indispensable strategic instrument in the hospitality industry; for example, the hotel industry routinely uses RM to maximize profits by obtaining revenues from rooms that would otherwise be unsold (Choi and Mattila, 2004). RM aims to maximize revenues by charging premium prices when demand is high and lowering prices to stimulate demand when demand is low. RM involves several operational processes, such as segmenting customers, setting prices and rate fences, and controlling capacity to maximize the revenue generated from fixed capacity (Kimes, 1989). Among others, pricing policy is a key element of RM in the hospitality industry. However, consumers may possibly perceive such RM practices as unfair because RM results in a variety of rates for what appears to be identical facilities (Choi and Mattila, 2005). Perceptions of price fairness play an important role in customer satisfaction and subsequent behavior (Oliver and Swan, 1989 and Bei and Chiao, 2001). Extreme reactions occur when consumers feel they have been unfairly treated, especially when the company provides no valid alternative (Seiders and Berry, 1998). For example, people may sanction a business by avoiding repeat custom, by spreading negative word-of-mouth recommendations, or even by using violence (Bougie et al., 2003). Research by Kahneman et al. (1986) showed that consumers are even willing to disadvantage themselves to punish a seller who, they perceived, acted unfairly. Shoemaker (2003) argued that RM can have an adverse effect on customers’ perceptions of the service company, resulting in destroyed customer loyalty. If consumers perceive RM as an unfair policy, consumers’ negative perceptions lead to decreased customer satisfaction and consequently to a worsening of the company's economic success (Lindenmeier and Tscheulin, 2008). Considering the importance of perceived fairness, an essential understanding is the major factors influencing customers’ fairness perceptions of RM pricing among hospitality companies that implement and use RM techniques. However, research, especially in service industry contexts (Bolton and Alba, 2006) of this topic has been sparse until recently (Homburg et al., 2005 and Xia et al., 2004). Previous research has considered price fairness evaluations in reference to past prices and price increases (Bolton and Alba, 2006 and Homburg et al., 2005), and mainly in a context of physical goods (Martín-Ruiz and ondán-Cataluña, 2008). The purpose of the current study, therefore, is to explore consumers’ fairness perceptions toward RM practices in the hotel industry. In particular, the study examines how consumers’ characteristics relate to fairness perceptions of RM pricing. The study performs a logistic regression to identify different consumers’ characteristics between two groups, that is, those with perceptions of fairness and those with perceptions of unfairness. This study provides two main contributions to the revenue management literature. First, the study examines effects of various demographic characteristics (i.e., age, income, gender, and education) along with two important factors (i.e., frequency of use and price consciousness) on consumers’ perceptions of fairness of RM practices. Different from previous studies, such as Beldona and Namasivayam (2006), this study includes all six factors in the model and simultaneously examines them together. By doing so, this study identifies partial effects of each factor while controlling for other factors. Second, this study performs a logistic regression analysis to accomplish the proposed goals. As Xia et al. (2004) argued, price unfairness is a different concept from price fairness, and price fairness may not be an issue until consumers perceive prices to be unfair. Therefore, logistic regression analysis has been selected as an appropriate method, as opposed to choosing regression analysis with the dependent variable as a continuous variable. For the analysis, this study also uses three different data subsets based on the degree of fair/unfairness perception. By performing the logistic regression analysis for the three groups, some characteristics cause extreme unfairness perceptions and others do not. These findings would not have been apparent if the analysis were only a regression analysis with a continuous dependent variable. Next, the study reviews the relevant literature and describes the methodology. Hypotheses and results follow, and conclusions complete the study.