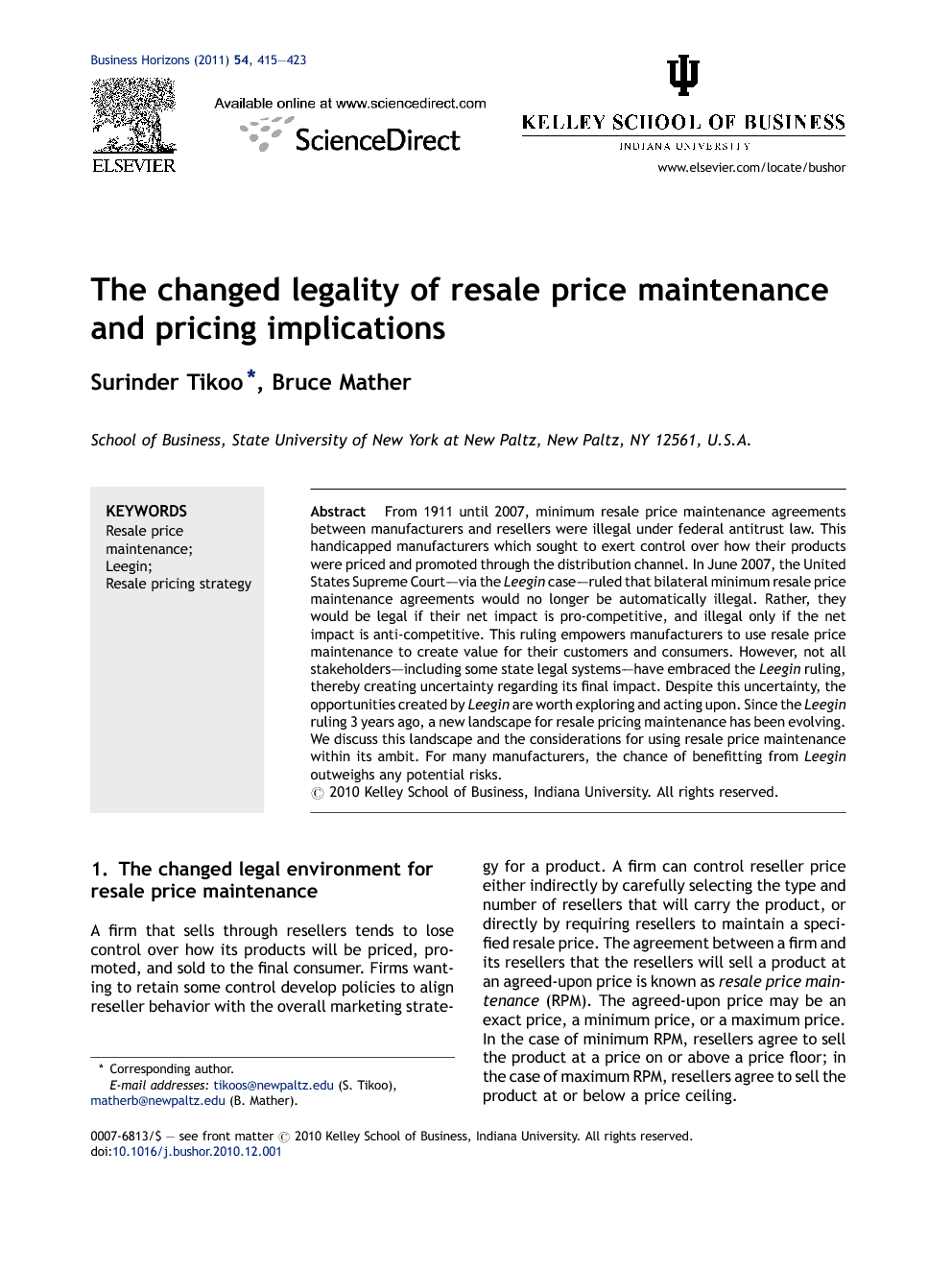 From 1911 until 2007, minimum resale price maintenance agreements between manufacturers and resellers were illegal under federal antitrust law. This handicapped manufacturers which sought to exert control over how their products were priced and promoted through the distribution channel. In June 2007, the United States Supreme Court—via the Leegin case—ruled that bilateral minimum resale price maintenance agreements would no longer be automatically illegal. Rather, they would be legal if their net impact is pro-competitive, and illegal only if the net impact is anti-competitive. This ruling empowers manufacturers to use resale price maintenance to create value for their customers and consumers. However, not all stakeholders—including some state legal systems—have embraced the Leegin ruling, thereby creating uncertainty regarding its final impact. Despite this uncertainty, the opportunities created by Leegin are worth exploring and acting upon. Since the Leegin ruling 3 years ago, a new landscape for resale pricing maintenance has been evolving. We discuss this landscape and the considerations for using resale price maintenance within its ambit. For many manufacturers, the chance of benefitting from Leegin outweighs any potential risks.

A firm that sells through resellers tends to lose control over how its products will be priced, promoted, and sold to the final consumer. Firms wanting to retain some control develop policies to align reseller behavior with the overall marketing strategy for a product. A firm can control reseller price either indirectly by carefully selecting the type and number of resellers that will carry the product, or directly by requiring resellers to maintain a specified resale price. The agreement between a firm and its resellers that the resellers will sell a product at an agreed-upon price is known as resale price maintenance (RPM). The agreed-upon price may be an exact price, a minimum price, or a maximum price. In the case of minimum RPM, resellers agree to sell the product at a price on or above a price floor; in the case of maximum RPM, resellers agree to sell the product at or below a price ceiling. Because RPM is a form of price fixing, it can affect competition in a market. Thus, RPM policies are subject to antitrust scrutiny in most economies. In the United States, RPM can be in violation of the Sherman Act, which regulates vertical restraints against competition. Both minimum and maximum RPM were per se illegal (i.e., not permitted under any circumstances) following the Supreme Court's ruling in Dr. Miles Medical Co. v. John D. Park & Sons Co. (1911). This implies that the Court considered RPM as almost always anti-competitive and, hence, automatically illegal under the Sherman Act. If some act is considered per se illegal, there is no defense available. The pro-competitive effect of RPM, if any, was considered so limited by the Dr. Miles Court that it made sense to ban the practice in the interest of legal administrative efficiency. Since then, however, the Court has gradually softened its stance toward RPM. In United States v. Colgate & Co. (1919), the Court provided some leeway for allowing unilateral RPM provided no specific agreement was executed, while RPM via bilateral contract remained illegal per se. Nevertheless, the antitrust perspective toward RPM remained hostile until the case of State Oil Co. v. Khan (1997), in which the Court ruled that maximum RPM is not per se illegal and should be evaluated under the ‘rule of reason.’ Contrary to per se illegality, the ‘rule of reason’ approach to evaluation of alleged antitrust violations provides that all relevant facts and circumstances peculiar to the business to which the restraint is to be applied should be considered. If the net impact on competition is negative, the practice would be deemed unlawful. This means that the illegality of maximum RPM was to be evaluated on a case-by-case basis. Minimum RPM, however, remained illegal per se. A decade later, in Leegin Creative Leather Products Inc. v. PSKS Inc. (2007), the Court ruled that bilateral minimum RPM agreements are also not per se illegal, and they too should be evaluated under the ‘rule of reason.’ The Court held that the blanket condemnation of bilateral minimum RPM agreements under the per se rule was at odds with economic theory, which since the 1960s had shown that in certain instances minimum RPM can increase consumer welfare. By lifting the per se ban, the Supreme Court has endorsed the potential pro-competitive effect of RPM. This lays the foundation for a shift in the antitrust perspective toward RPM, and thereby significantly alters the legal environment of RPM. The changed environment provides new opportunities for manufacturers to manage how their products are priced and sold through the distribution channel. While in theory Leegin gives practitioners new opportunities for resale pricing, its potential impact on RPM practice is not well defined. This is because Leegin's impact on RPM practice is shaped by the lower federal trial and appeals courts, state legal systems, legislators, and enforcement agencies such as the Federal Trade Commission (FTC). Not all of these stakeholders agree that the rule of reason treatment of RPM is in the best interests of consumers. Consequently, the current legal environment of RPM is somewhat in a state of flux. Figure 1 shows the entities and factors affected by the Leegin decision, and serves as an organizing framework for the rest of this article. Consistent with Figure 1, we first describe the Leegin case. Next, we review the theoretical perspectives based on which the Supreme Court ruled that RPM can both stimulate and stifle competition, and thereby increase or decrease consumer welfare. We then describe how the different entities in the RPM environment have reacted to the Leegin decision. Finally, we discuss the implications of Leegin for RPM policies.