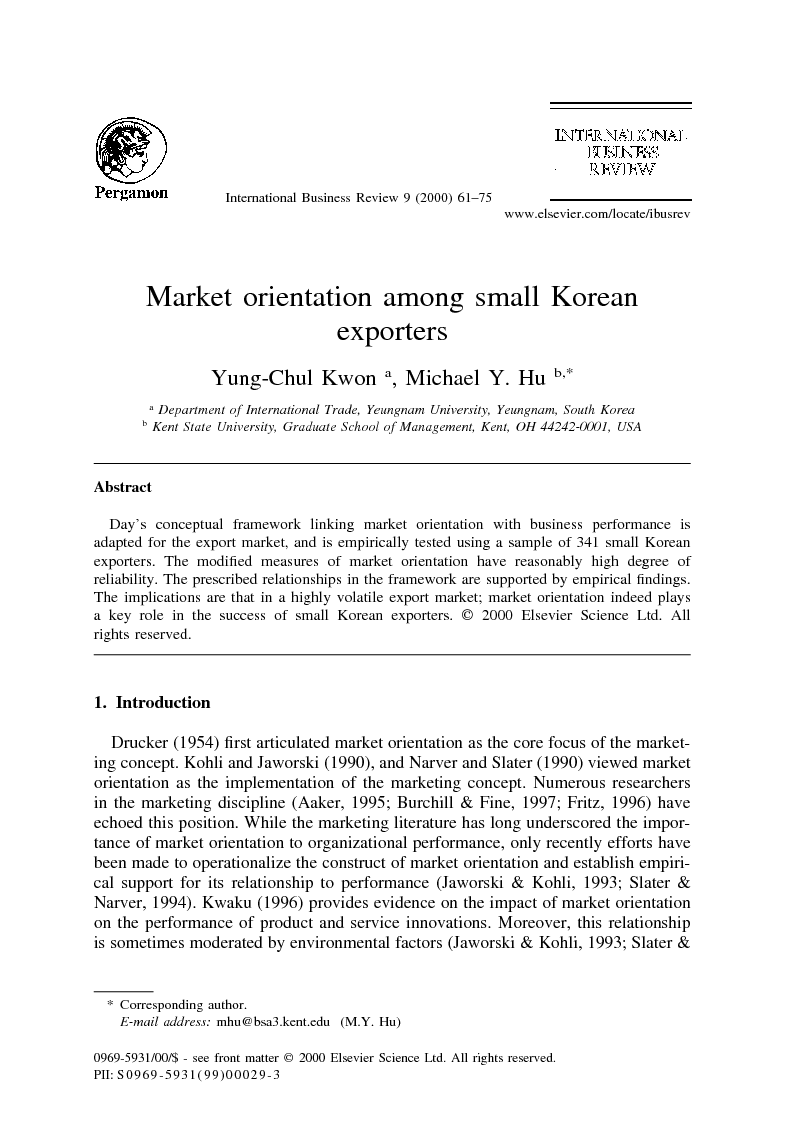 The purpose of this study is to empirically examine the factors leading to market orientation of exporters and also whether market orientation in the export markets will lead to better performance. The findings of this study suggest that the market orientation of an exporter is indeed an important determinant of its performance. This finding is reported by various researchers (for instance, Jaworski & Kohli, 1993) using mostly US samples of manufacturers in the domestic market. The overall relationship between market orientation and performance remains significant regard-ess of market conditions, growth and intensity of competition. Yet, the effects of market condition surfaced when total business performance is disaggregated into volume of export, growth and profits. In a high growth export market, market orien- tation is not a significant determinant of profit and is only marginally related to export volume. This finding shows in a high growth market, market oriented exporters are likely to place emphasis on long term profits, forsaking short-term returns. The same implication can be drawn for the highly competitive market condition where market orientation is not significantly related to short term profits. As pointed out by Ohmae (1991), market orientation should be used as a safeguard of long-term inter- national competitiveness. The overall degree of market orientation for exporters can be enhanced by engag- ing in any or all of the three sets of activities pertaining to market orientation. For intelligence generation, an exporter is well advised to set aside a foreign market research budget, devote manpower for foreign market research, increase contact with overseas market, subscribe to foreign business intelligence service and maintain con- tact with foreign distributors and agents. Similar implications can be drawn from items constituting intelligence dissemination and market response. An informal or formal information system should be considered for disseminating foreign market information among the various departments. Foreign consumers’ preferences and distributors’ requests should be considered in the overall development of the market- ing plan. This study suggests several capability factors that are related to market orientation. Exporters’ commitment to internationalization cultivates an environment for their employees to be sensitive and responsive to export market developments. Commit- ment to internationalization is also reflected in the establishment of export depart- ment, long range export planning, and export research department. As the results here indicate, level of market orientation is highly correlated with the extent of inter- nationalization. As a firm becomes more and more internationalized, it shifts its focus to international markets. Information gathering activities will intensify and information will be disseminated among departments and its marketing program will also be more responsive to changes in foreign markets.