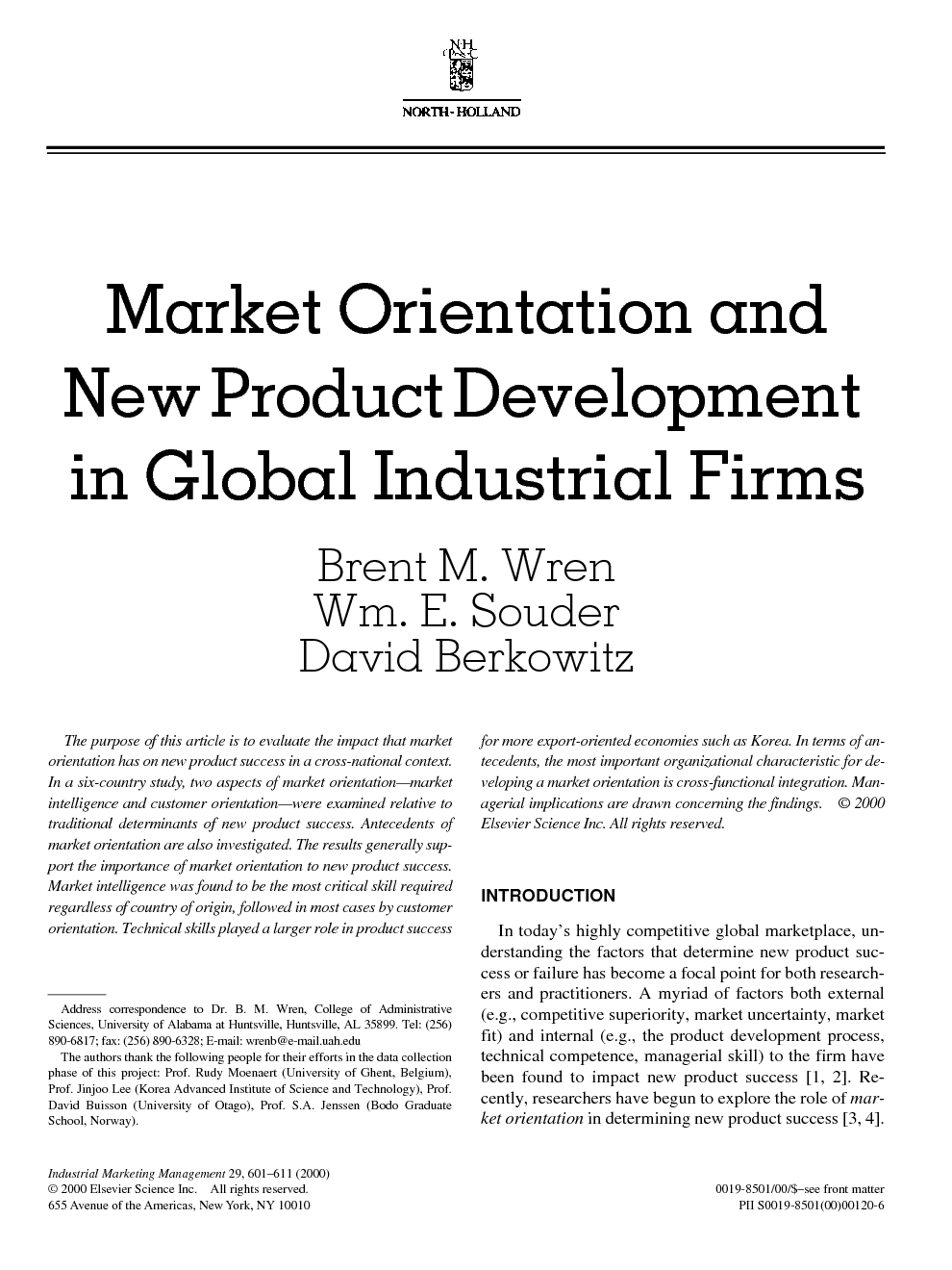 In today's highly competitive global marketplace, understanding the factors that determine new product success or failure has become a focal point for both researchers and practitioners. A myriad of factors both external (e.g., competitive superiority, market uncertainty, market fit) and internal (e.g., the product development process, technical competence, managerial skill) to the firm have been found to impact new product success 1 and 2. Recently, researchers have begun to explore the role of market orientation in determining new product success 3 and 4. Market orientation is “the set of cross-functional processes and activities directed at creating and satisfying customers through continuous needs assessment” [5]. In other words, market-oriented firms enhance performance by systematically using market intelligence to better understand the marketplace, and then develop product strategies to meet consumer wants and needs. Research has established that market orientation is manifest at several levels in an organization [6]. For instance, research has demonstrated that internal processes such as corporate culture, managerial support, interdepartmental connectedness, and customer-focused intelligence gathering and dissemination are necessary components in a market-oriented firm 7, 8 and 9. These processes potentially impact information flows, resource allocations, and cross-functional R&D activities that are so vital to new product development. While substantial progress has been made in defining the concept of market orientation, and its role in determining new product success, there is some evidence to suggest that existing knowledge may not be equally applicable across markets, cultures, and industries 10 and 11. In their study of market orientation in U.S. and Scandinavian companies, Selnes, Jaworski, and Kohli [9] posited that given the high level of government involvement and lower levels of competition, Scandinavian firms might have fewer incentives to be market oriented. In their study of Japanese firms, Deshpande, Farley, and Webster [12] found that “adhocracy” firms and “market” firms outperformed “clans” and “hierarchies.” These results suggest that cultures focused on creativity, technical skills, competition, and production are superior to those characterized by participation, teamwork, and coordination, skills thought to be vital to market-oriented firms. Likewise, in their study of European and Asia work units Newman and Nollen [13] found that management practices that are favored in the U.S. are likely to be ineffective in some other countries that are culturally different. Finally, there is research to suggest that the skills that comprise market orientation (organizational support/systems, market knowledge, interconnectedness, etc.) are more important in industries characterized by rapid technology change, competitive intensity, and market uncertainty 14 and 15. Market orientation holds tremendous potential as a framework for assessing the performance of new product development processes. As demonstrated by the few examples provided above, given vast differences in economies, cultures, corporate structures, etc., it is conceivable that the relative importance of market orientation to new product success in various countries would differ. With global markets playing an ever-increasing role in the success of new technologies/products research into the applicability of market orientation concepts across countries is sorely needed. The purpose of the current research project is to explore the market orientation–new product success relationship in a global context. Hypotheses are developed concerning the relative role that market orientation plays in the success of new product development projects. These hypotheses are then tested using a multi-company sample across six diverse countries. The results and implications discussed are particularly relevant for multinational or global organizations that often operate in turbulent, uncertain markets.

The most consistent finding in our analysis is that marketing intelligence is the critical skill required for all firms regardless of the country of origin. This is demonstrated by the significance of market intelligence in our regression results within each country. In each regression model market intelligence was a significant and positive predictor of success and the significance is strong (i.e., < .05). This supports the notion that gathering, recording and sharing information about the marketplace creates a certain level of market intelligence. This function provides necessary input to the marketing managers whom are introducing new products. Marketers who understand the market undoubtedly do a better job developing and introducing new products. A second consistent finding is that customer orientation is also a significant and positive contributor toward success for all but one country, Korea. Interestingly, the countries where customer orientation exhibits strong significance (U.S., N.Z., Belgium, Sweden, Norway) score high on the individualism index [35]. Cultures that score high on this index produce managers that are more likely to use current management practices and are more likely to be aware of current market value [21]. Therefore individualist countries are likely to endorse the practice of customer orientation. Our third observation is that technical skills are required to a greater extent in those countries that have a disposition toward exporting. Korea, Norway, Sweden and Belgium have an export orientation. That is, the firms in these countries develop products primarily for export markets. Because firms in these economies need to attract consumers in non-native markets they need to compete with skills that are not found in their markets abroad. Often it is technical skill that ensures that the product will be viewed as having value relative to local products. Specifically, Korea is an overwhelmingly export-oriented economy. This implies that the customer as defined by our survey is not of interest to firms in Korea. Being able to produce for another country's consumer is more critical. Therefore, this requires market intelligence and technical skill rather than customer orientation. In the U.S. and New Zealand technical skills were not a significant predictor of new product success. As for the U.S., the lack of significance for technical skill implies that U.S. managers are less concerned about having a corporate culture defined by technical competence. We believe this is because the U.S. culture is oriented toward hiring technical competence on an ad hoc or as needed basis. It is not uncommon for many companies to hire engineering and technical employees on a contract basis. Specifically, many U.S. firms engage in “buying” the best short-term employees available to fit project needs. Therefore, technical competence is viewed as something that can be purchased with relative ease and there is less focus on it as part of the corporate culture. We believe that the lack of significance in New Zealand is primarily due their culture. New Zealand is a small country with a highly innovative, entrepreneurial spirit. These factors have caused them to be naturally customer focused, rendering technical skills less important to new product success. The analyses of the antecedents of market orientation provide interesting findings for discussion. First, it is clear that integration is critical in explaining both market intelligence and customer orientation. This is consistent with previous findings that have reported that the management of NPD projects requires early interfaces between project personnel 25 and 29. Clearly, integration allows for increased communication and knowledge sharing between the project participants. This would contribute to the project by ensuring that team members share a common vision and would have the effect of unifying the project team's efforts. Second, in the U.S. and New Zealand, project manager skill and top management support are significant and positive predictors for both market intelligence and customer orientation. This implies that the manager is an important component in assisting with giving the team a customer orientation or passing on the appropriate information to create market intelligence. In individualistic societies like the U.S. and N.Z., support from project managers has a unifying or coordinating responsibility to the members of his/her team. If the members of the team realize that the manager is hindering the customer orientation by demanding solutions that are time or product focused rather than customer focused they will react accordingly and customer orientation will fall by the wayside. The same can be said of market intelligence. That is, managers that do not pass along critical market information impede the learning process of all members of the team. Therefore, team members are less informed about market conditions and market intelligence ultimately suffers. The lack of significance for top management support in social economies such as Korea and Belgium is not that surprising. Korea is a mass population country that functions by rules to control behavior rather than individual managers. Likewise, the Flemish Belgians have many mores that set appropriate behaviors. In situations like these, the manager has less impact because a sense of right and wrong is more engrained in the culture.