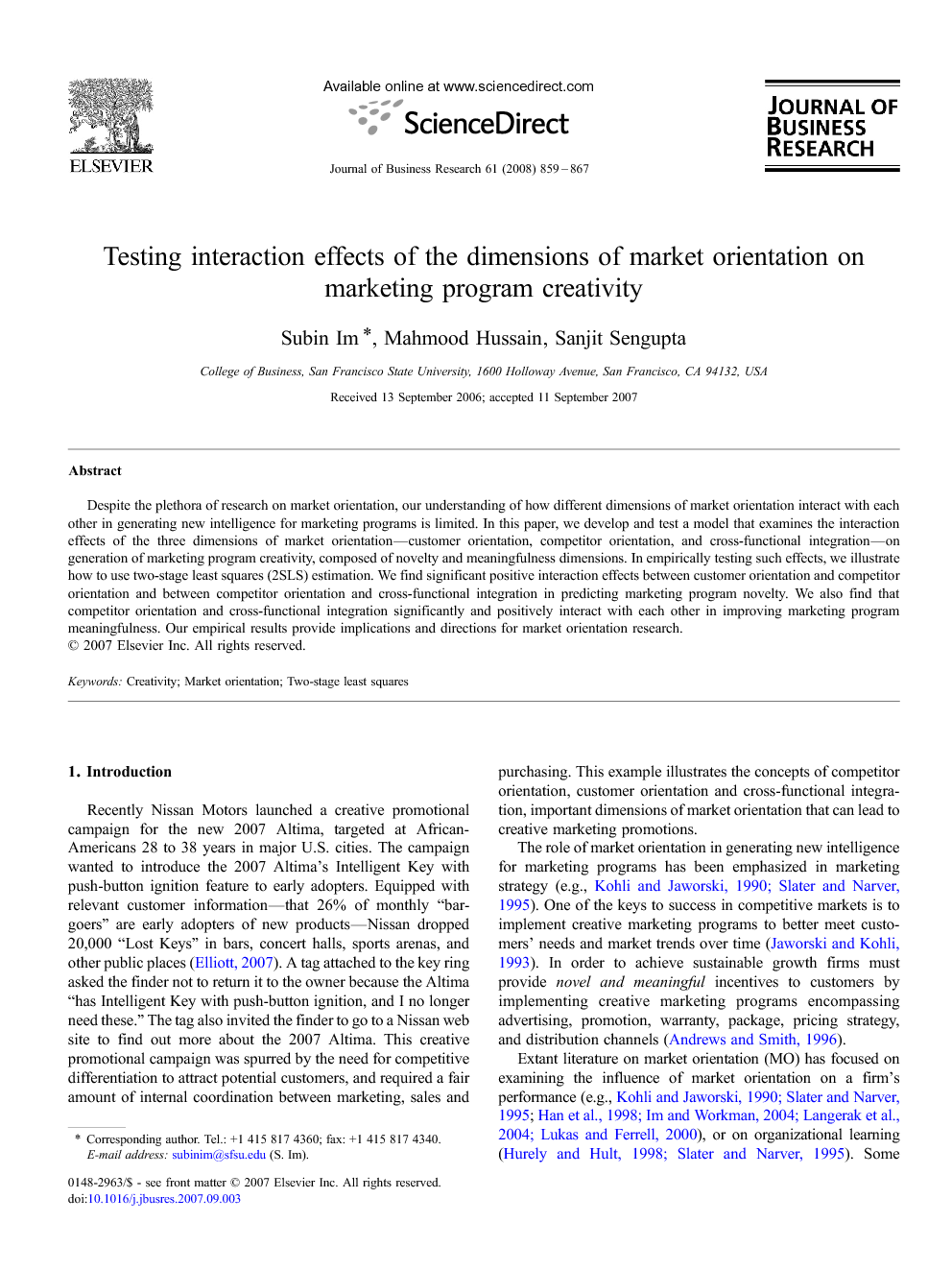 Recently Nissan Motors launched a creative promotional campaign for the new 2007 Altima, targeted at African-Americans 28 to 38 years in major U.S. cities. The campaign wanted to introduce the 2007 Altima's Intelligent Key with push-button ignition feature to early adopters. Equipped with relevant customer information—that 26% of monthly “bargoers” are early adopters of new products—Nissan dropped 20,000 “Lost Keys” in bars, concert halls, sports arenas, and other public places (Elliott, 2007). A tag attached to the key ring asked the finder not to return it to the owner because the Altima “has Intelligent Key with push-button ignition, and I no longer need these.” The tag also invited the finder to go to a Nissan web site to find out more about the 2007 Altima. This creative promotional campaign was spurred by the need for competitive differentiation to attract potential customers, and required a fair amount of internal coordination between marketing, sales and purchasing. This example illustrates the concepts of competitor orientation, customer orientation and cross-functional integration, important dimensions of market orientation that can lead to creative marketing promotions. The role of market orientation in generating new intelligence for marketing programs has been emphasized in marketing strategy (e.g., Kohli and Jaworski, 1990 and Slater and Narver, 1995). One of the keys to success in competitive markets is to implement creative marketing programs to better meet customers' needs and market trends over time (Jaworski and Kohli, 1993). In order to achieve sustainable growth firms must provide novel and meaningful incentives to customers by implementing creative marketing programs encompassing advertising, promotion, warranty, package, pricing strategy, and distribution channels (Andrews and Smith, 1996). Extant literature on market orientation (MO) has focused on examining the influence of market orientation on a firm's performance (e.g., Kohli and Jaworski, 1990 and Slater and Narver, 1995; Han et al., 1998, Im and Workman, 2004, Langerak et al., 2004 and Lukas and, Ferrell, 2000), or on organizational learning (Hurley and Hult, 1998 and Slater and Narver, 1995). Some researchers further investigate how environmental factors such as market and technological turbulence moderate the link between market orientation and innovation outcomes (e.g., Gatignon and Xuereb, 1997 and Han et al., 1998). Despite the plethora of research on the effect of MO on innovation outcomes, our understanding of how different dimensions of MO interact with each other in generating market intelligence is limited. In order to narrow this gap, recent research calls for studies to examine potential interaction effects among dimensions of MO ( Kirca et al., 2005 and Jimenez-Jimenez and Cegarra-Navarro, 2007). Hence, the goal of this research is to empirically test a model that explores the interaction effects of different dimensions of MO on marketing program creativity. We first define marketing program creativity as the degree to which marketing programs, associated with new product development, are perceived to be different from competitors' programs as well as more meaningful to target customers (Andrews and Smith, 1996 and Im and Workman, 2004). Following Andrews and Smith (1996), we choose marketing program creativity as a dependent variable for the following reasons. First, market orientation is inherently viewed as a market learning process where firms generate, disseminate, and react to new market intelligence (e.g., Kohli and Jaworski, 1990 and Slater and Narver, 1995), which results in promoting creative ideas and incentives for consumers. Second, marketing program creativity, often considered as a gestalt of product development activities, helps a product achieve the innovation-related performance goal of product differentiation by providing unique and meaningful incentives to customers (Andrews and Smith, 1996). Following Narver and Slater's (1990) conceptualization of three dimensions of MO—customer orientation (CUO), competitor orientation (COO), and cross-functional integration (XFI), we empirically explore a model where these dimensions interact with each other, synergistically improving a firm's generation of creative ideas for marketing programs in the product development context (Han et al., 1998 and Im and Workman, 2004). From an empirical perspective, our study also contributes to testing nonlinear interaction effects using a two-stage least squares estimation (2SLS) following the recommendations of Bollen and Paxton (1998) and Li and Harmer (1998). This method, that uses composite variables based on multi-item measures, helps test the robustness of the results against the problems (e.g., the inadequacy of significance tests, consistency tests, or fit statistics) involved in testing interaction effects in OLS regression and subgroup analysis (see Bollen, 1996, Bollen and Paxton, 1998 and Jaccard et al., 1990 for review). The next section presents a brief background and literature review. Later, the details on the econometric procedure using 2SLS estimation are described before estimation results. The paper concludes with a discussion of implications and future research directions.

Prior to examining the interaction effects, we examine descriptive statistics and correlations of all variables using summated scores across multiple items (Table 1). The means and standard deviations indicate that there is enough variability in the measures of the major constructs. The signs of the correlations are consistent with our proposed relationships, though these correlations do not necessarily imply causality.Following Bollen and Paxton's (1998) approach, we used 2SLS regression employing SYSLIN procedure in SAS to test interaction effects. In order to verify the robustness of our estimates we also estimated the coefficients using Ordinary-Least-Squares (OLS) regression. The estimation results for interaction effects using 2SLS and OLS regression are summarized in Table 2. Although we have run full-model regressions with both main and interaction effects, given the focus of the paper and the need to simplify presentation, we report the results of interaction effects only. Fig. 1 reports the results from 2SLS regression analysis. Both 2SLS and OLS provide consistent results in terms of significance testing. Below 2SLS estimates for each dependent variable are discussed separately.