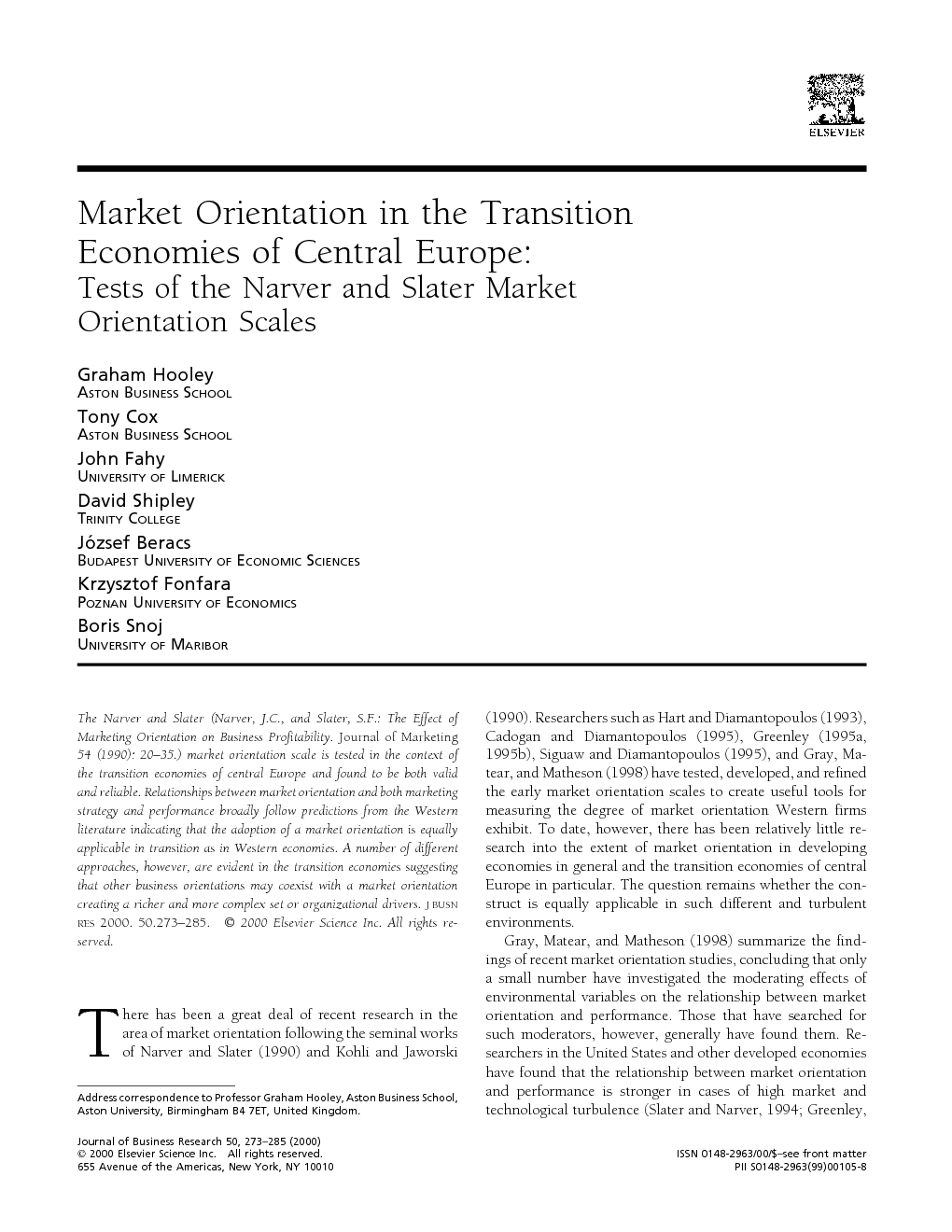 The Narver and Slater (Narver, J.C., and Slater, S.F.: The Effect of Marketing Orientation on Business Profitability. Journal of Marketing 54 (1990): 20–35.) market orientation scale is tested in the context of the transition economies of central Europe and found to be both valid and reliable. Relationships between market orientation and both marketing strategy and performance broadly follow predictions from the Western literature indicating that the adoption of a market orientation is equally applicable in transition as in Western economies. A number of different approaches, however, are evident in the transition economies suggesting that other business orientations may coexist with a market orientation creating a richer and more complex set or organizational drivers. There has been a great deal of recent research in the area of market orientation following the seminal works of Narver and Slater (1990) and Kohli and Jaworski (1990). Researchers such as Hart and Diamantopoulos (1993), Cadogan and Diamantopoulos (1995), Greenley 1995a and Greenley 1995b, Siguaw and Diamantopoulos (1995), and Gray, Matear, and Matheson (1998) have tested, developed, and refined the early market orientation scales to create useful tools for measuring the degree of market orientation Western firms exhibit. To date, however, there has been relatively little research into the extent of market orientation in developing economies in general and the transition economies of central Europe in particular. The question remains whether the construct is equally applicable in such different and turbulent environments. Gray, Matear, and Matheson (1998) summarize the findings of recent market orientation studies, concluding that only a small number have investigated the moderating effects of environmental variables on the relationship between market orientation and performance. Those that have searched for such moderators, however, generally have found them. Researchers in the United States and other developed economies have found that the relationship between market orientation and performance is stronger in cases of high market and technological turbulence (Slater and Narver 1994, Greenley 1995b and Doyle and Wong 1996; Cadogan, Diamantopoulos, and Siguaw, 1998). The explanation appears to be that in more turbulent markets managers need to be more sensitive to market changes (Gray, Matear, and Matheson, 1998). The transition economies of central Europe exhibit a high degree of environmental turbulence. Three macroeconomic indicators in particular point to the turbulence of the economies of the region: fluctuating growth rates, rising unemployment, and high levels of inflation. The first factor has been the large, and relatively difficult to predict, swings in economic performance and growth rates. In Hungary, for example, the decline in GDP of 11.9% in 1991 was halted by 1993 and reached an annual growth rate of 1.3% by 1996. In Poland, decline of 11.6% in GDP in 1990 was converted to strong growth of approximately 7% per annum (pa) by 1995. Slovenian GDP decline peaked at 8.9% in 1991 and by 1996 was showing an annual growth of 3.1%. Future predictions remain, however, subject to wide margins of error. A second factor has been the significant rise in unemployment rates, a phenomena not known (or at least not officially acknowledged) during the period of central planning. In Hungary unemployment rose from 2% of the workforce in 1990 to 10% in 1996, whereas in Poland the rise over the same period was from 6% to 11% (with a peak of 16% in 1993–94). In Slovenia, unemployment rose from 5% in 1990 to 14% in 1996. The rapid rise of unemployment has created a great deal of insecurity that has translated itself to the marketplace. The third factor is inflation. The economic shock measures taken in 1989–90 in Poland and Slovenia resulted in exceptionally high rates of inflation in those years (590% in Poland and 550% in Slovenia). Although never reaching such levels since, inflation continues to be a significant factor in all economies of the region. In Hungary, annual inflation peaked at 35%pa in 1991 but has stabilized at approximately 20%pa since. In Poland, the annual rate was brought down to 19% in 1996 and in Slovenia to 9% in 1996. Despite the success in reducing inflation levels, they remain significantly higher that in many Western, developed economies (see Business Central Europe, 1998). Hooley et al. (1998) have discussed the microeconomic, or industry specific environment facing firms in the region. This is characterized by increasingly price sensitive customers (directly related to the economic and employment pressures noted above) demanding better quality products and services. Because of the deregulation of markets and the encouragement of inward investment (especially in Hungary and Poland), customer choice is increasing, and new market segments are beginning to emerge; new products are coming to market more rapidly, and new technologies are being introduced. All these factors lead to markets experiencing rapid, and often unpredictable, change. In short, highly turbulent markets resulted. Under such circumstances, the relationship between market orientation and performance might be expected to be strong. If market orientation is a reliable and valid construct, it should be applicable in environments and economies other those in which it originally was developed and tested. Testing and extension of the construct to date has largely occurred in similar, Western developed economies. This study set out to investigate the reliability and validity of the market orientation construct in the very different economic and business environments of central Europe. Specifically content validity was assessed through the use of in-depth interviews with managers, nomological validity was assessed through the ability of the market orientation construct to perform as predicted by marketing theory with relation to other strategy constructs, including performance, and internal reliability and consistency of the scale was assessed through the use of split-half testing by using Cronbach's coefficient alpha (see Malhotra, 1996).

The research has demonstrated that the overall Narver and Slater (1990) MO scale is both valid and reliable as a measure of market orientation in the transition economies of central Europe. When presented with the scale items, managers had little difficulty relating to them and discussions during the qualitative phase of the research suggested that the construct at least maintained face validity. The reliability coefficient (Cronbach alpha) for the overall MO scale was good, and all items contributed in the manner predicted by the theory. In addition, analysis of results shows that in most, but not all, instances the relationships between MO and business approach, strategy, and performance is as predicted from the Western market orientations literature demonstrating nomological validity. Adopting a market orientation appears equally beneficial in turbulent transition economies as in Western developed markets. The research also has shown, however, that other business orientations may coexist with a market orientation providing a more complex, richer insight into the stance these firms take in their markets and the factors driving their strategic decisions. A number of avenues of further research are suggested by the above findings. First, the MO scales could be usefully tested in other, non-Western markets. For example, testing in the markets of Southeast Asia, South America, Africa, and China would provide further evidence of the generalizability and robustness of the scale. Further attention also could be addressed to the use of the overall scale or its separate subcomponents. Second, research into orientations could be usefully expanded to cover other strategic orientations, such as short-term financial (Doyle, 1998), technology and innovation (Simon, 1996), quality (Parkinson and Chambers, 1998), and employment provision and alternative stakeholder perspectives (Greenley and Foxall, 1996). These other orientations should not be seen as competitors to a market orientation, rather as potentially complementary and enriching. Third, research into the role of price as a positioning tool is called for. Whereas quality of product and service clearly have been shown to be related to market orientation, price has not. Aggressive, market domination goals might suggest low price positioning to aid market penetration. High quality positionings might suggest high prices to recoup costs and reinforce premium positions. Neither was found in the study, and the reasons behind this are not clear. A number of limitations should be noted. First, the study is based on responses to a mailed survey directed to one respondent, the CEO, in each company. Whereas the CEO should be in a good position to judge both market orientation and the other strategy and performance issues addressed in the study, it has been argued elsewhere (see, e.g., Wensley, 1995) that other perspectives are necessary to truly judge market orientation. Second, the level of response to the mailed survey averaged 22% across the three countries. Whereas attempts were made to gauge and counter nonresponse bias, it is to be expected that the respondents are atypical in their strategic literacy and interest in marketing issues! Indeed, the overall average level of market orientation as measured by MO was higher than the Narver and Slater (1990) score in the United States suggesting a more market-oriented sample in the first place. Because of the analysis approach of comparing market orientation within the sample, however, this bias is not a major concern. Despite the above, it is clear that the MO construct is a valid and reliable measure of market orientation in the transition economies of central Europe.Cadogan Diamantopoulos Siguaw 27 and Cox Hooley Greenley Fahy Beracs Fonfara Snoj 27