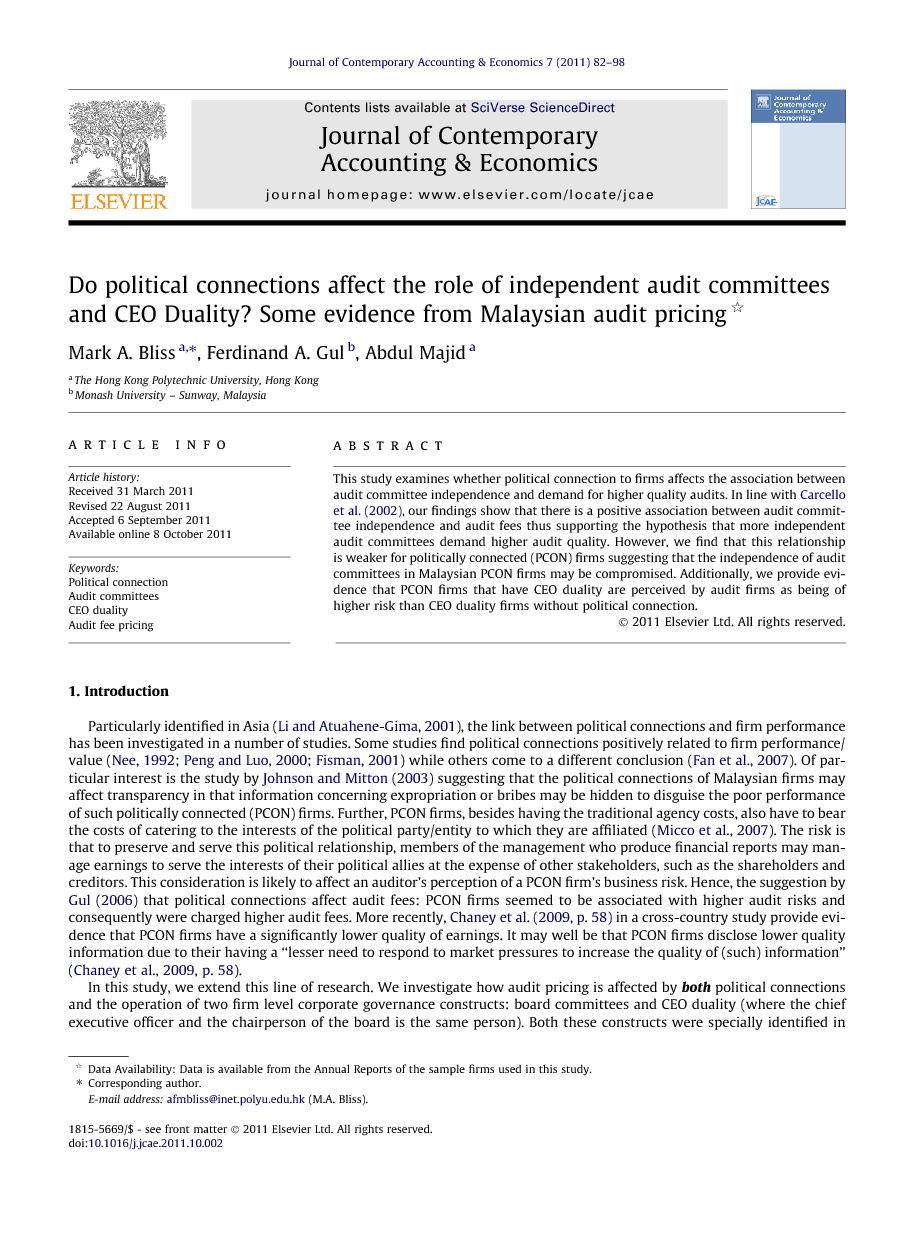 This study examines whether political connection to firms affects the association between audit committee independence and demand for higher quality audits. In line with Carcello et al. (2002), our findings show that there is a positive association between audit committee independence and audit fees thus supporting the hypothesis that more independent audit committees demand higher audit quality. However, we find that this relationship is weaker for politically connected (PCON) firms suggesting that the independence of audit committees in Malaysian PCON firms may be compromised. Additionally, we provide evidence that PCON firms that have CEO duality are perceived by audit firms as being of higher risk than CEO duality firms without political connection.

This study examines whether the role of independent audit committees and CEO duality are affected by the existence of political connections. Evidence is provided in this study that a higher proportion of independent directors on the audit committee is positively associated with higher audit fee pricing. This result is consistent with that of Carcello et al. (2002) who find that more independent, diligent and expert boards are positively associated with higher audit fees as the independent directors demand higher quality audits. This positive association, however, is found to be weaker in firms with political connections. It appears from this evidence that the independence of directors on audit committees may be compromised when their firm is politically connected. This study also provides evidence that risks associated with CEO duality as perceived by audit firms are exacerbated in PCON firms. This matter is particularly important given the pervasiveness of CEO duality in the US and the possibility that such firms may have political connections. The financial crisis gripping the world markets since the latter quarter of 2008 guarantees that calls for improvements in board oversight will continue into the foreseeable future. Johnson and Mitton (2003) note that in the US, firms with strong political connections have been the beneficiaries of large government bailouts during the financial crisis. The same is true of Malaysia PCON firms which benefitted from government bailouts in one form or another. The beneficiaries included, at different times, “a flock of politically connected banks, the national airline Malaysia Airlines (MAS), the limping national car company Proton… (and) the shipping concern, Konsortium Perkapalan Bhd (KPB)”.23 In both the USA and Malaysia, such government bailouts effectively insulate PCON firms against failure. A point of contrast is that Malaysian PCON firms are comparatively more easily identifiable because the incumbent ruling party remains unchanged in Malaysia, in election after election, from 1957 to the present. In contrast, their US counterparts often support both major political parties with the ruling party tending to change over subsequent elections. Additionally, while the common law legal regime in Malaysia immunizes all auditors (and not only auditors of PCON firms) from actions in negligence by shareholders, creditors or members of the public,24 their US counterparts face the ever-present risk of litigation at the suit of disgruntled shareholders, members of the investing public, and creditors. This study has potential global implications as the world searches for improvements in corporate governance. Given the findings, it may be prudent to reconsider the impact that political connections in firms have on corporate governance