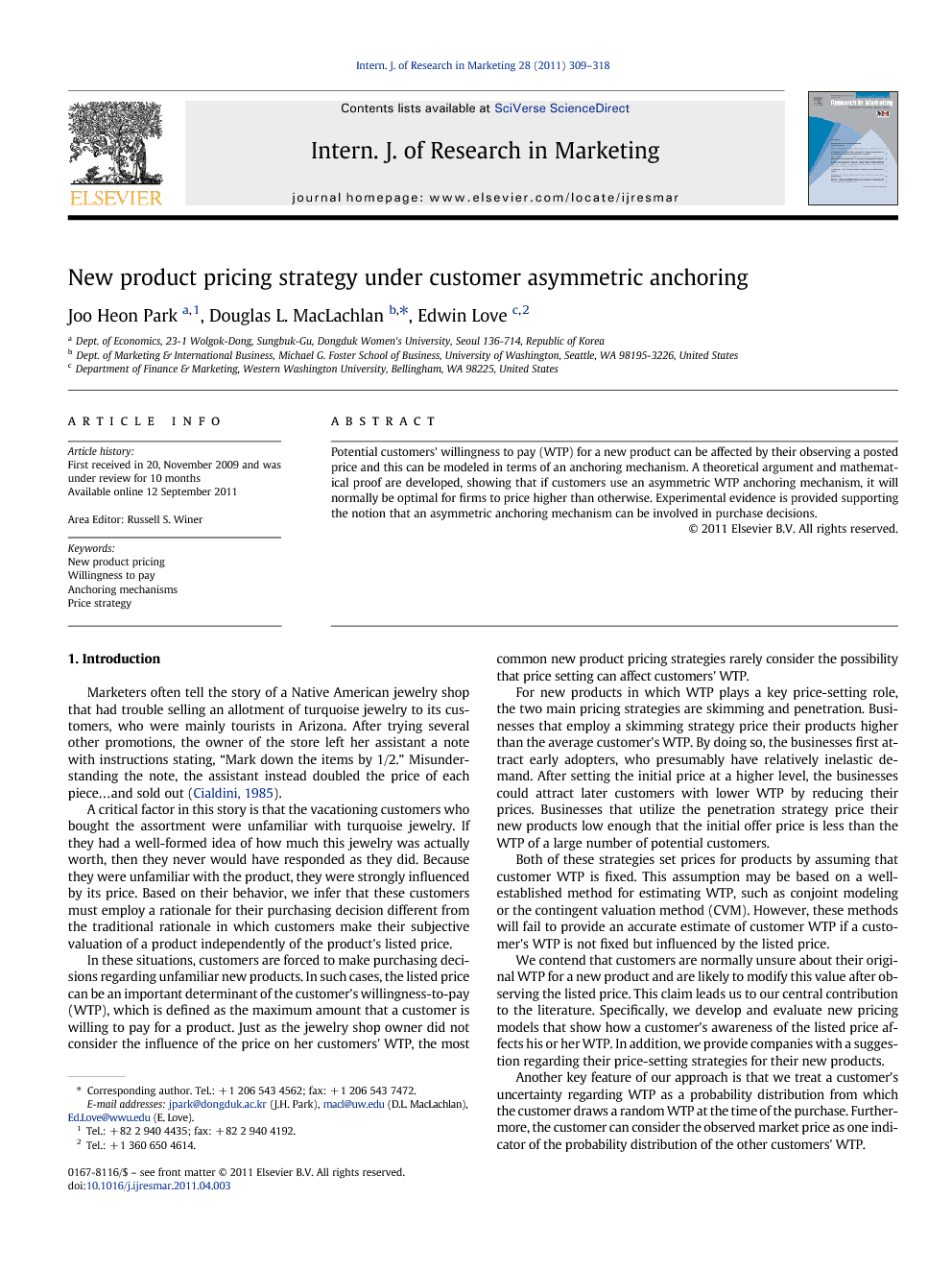 Potential customers' willingness to pay (WTP) for a new product can be affected by their observing a posted price and this can be modeled in terms of an anchoring mechanism. A theoretical argument and mathematical proof are developed, showing that if customers use an asymmetric WTP anchoring mechanism, it will normally be optimal for firms to price higher than otherwise. Experimental evidence is provided supporting the notion that an asymmetric anchoring mechanism can be involved in purchase decisions.

In this study, we developed two mechanisms for describing how customers adjust their WTP for new products. We presume that customers anchor their WTP by calculating the weighted average of their subjective WTP and the market WTP. In a One-step Anchoring Mechanism (AM1), the customer directly compares the observed price with his or her anchored WTP. In a Two-step Anchoring Mechanism (AM2), the customer first compares his or her subjective WTP with the observed price and then (if necessary) compares his or her anchored WTP with the listed price. We provided logical arguments for these mechanisms, showed how they relate to the findings of prior research, and then developed a series of propositions that followed from the mechanisms. Then, we provided experimental evidence in support of AM2. Lastly, we examined the pricing implications for firms that desire to maximize profits. As our study and prior research on anchoring and adjustment have shown, a firm that uses well-proven methods to research its customers' subjective WTP before it sets the price for new products may still price its offering below the profit-maximizing level because these methods do not usually account for the anchoring and adjustment effect described in this paper. Note that we are not suggesting that such methods be dropped altogether. However, we do suggest that prices based on such methods be adjusted upwards and retested in realistic environments that allow for anchoring and adjustment effects to be observed. These findings will be of interest to firms that develop or sell innovative products. Pricing these types of products is a major concern for these firms, and our findings suggest that firms using “skim” pricing strategies stand to benefit from the upward adjustment in the WTP that their customers experience at the time of the purchase. To develop our model, we imposed many distributional assumptions, such as the assumption that both the subjective WTP and the market WTP have the same type of distributions. In addition, our model can be developed in many ways by relaxing the distributional assumptions. For example, by relaxing the assumption of identical variance, we can develop a model that captures the relationship between pricing and the degree of uncertainty associated with the subjective WTP. Our logic suggests that if customers have more ill-formed notions of their WTP for new products, then we should find higher prices in the marketplace, but we know of no research that has evaluated the relationship between pricing and WTP variance. Moreover, future scholars can probably find evidence suggesting that different types of customers have different WTP distributions, which may lead to certain opportunities for legal price discrimination across the isolated customer segments. Finally, our model can also be expanded to a multi-period model that explains a customer's repeated purchasing behavior. A multi-period model based on our models will help explain how customer WTP evolves as new products become established in the marketplace and will also help account for the differences in the price elasticities between repeat purchasers and first-time buyers.