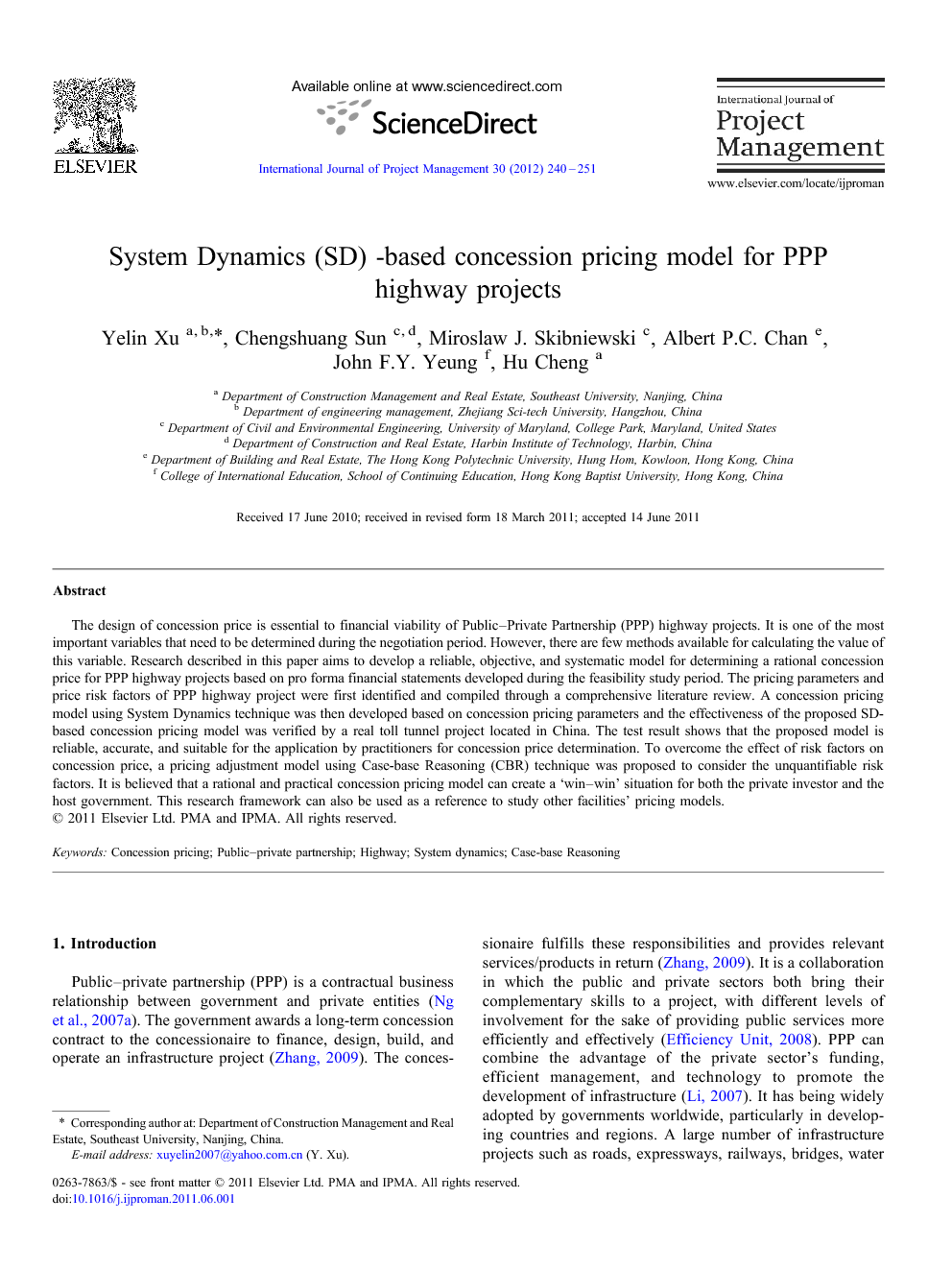 The design of concession price is essential to financial viability of Public–Private Partnership (PPP) highway projects. It is one of the most important variables that need to be determined during the negotiation period. However, there are few methods available for calculating the value of this variable. Research described in this paper aims to develop a reliable, objective, and systematic model for determining a rational concession price for PPP highway projects based on pro forma financial statements developed during the feasibility study period. The pricing parameters and price risk factors of PPP highway project were first identified and compiled through a comprehensive literature review. A concession pricing model using System Dynamics technique was then developed based on concession pricing parameters and the effectiveness of the proposed SD-based concession pricing model was verified by a real toll tunnel project located in China. The test result shows that the proposed model is reliable, accurate, and suitable for the application by practitioners for concession price determination. To overcome the effect of risk factors on concession price, a pricing adjustment model using Case-base Reasoning (CBR) technique was proposed to consider the unquantifiable risk factors. It is believed that a rational and practical concession pricing model can create a ‘win–win’ situation for both the private investor and the host government. This research framework can also be used as a reference to study other facilities' pricing models.

Public–private partnership (PPP) is a contractual business relationship between government and private entities (Ng et al., 2007a). The government awards a long-term concession contract to the concessionaire to finance, design, build, and operate an infrastructure project (Zhang, 2009). The concessionaire fulfills these responsibilities and provides relevant services/products in return (Zhang, 2009). It is a collaboration in which the public and private sectors both bring their complementary skills to a project, with different levels of involvement for the sake of providing public services more efficiently and effectively (Efficiency Unit, 2008). PPP can combine the advantage of the private sector's funding, efficient management, and technology to promote the development of infrastructure (Li, 2007). It has being widely adopted by governments worldwide, particularly in developing countries and regions. A large number of infrastructure projects such as roads, expressways, railways, bridges, water supply, and power plants have been operating by private firms under PPP procurement model (Liou and Huang, 2008). The “heart” of a PPP project issues is the concession price, as it determines the commercial viability and profitability of a project, which is often discussed intensively during the negotiation period (shen et al., 2007). PPP product pricing is an extremely complicated and a rather risky decision-making process. It not only determines whether or not the project company can win the bid, but also determines whether or not the project company can obtain reasonable earnings during operation period. As far as private investors are concerned, it is necessary to set the concession price as low as possible to win the bid, on the other hand, they have to raise the concession price as high as possible to maximize profit. Therefore, setting a reasonable concession price, so as to guarantee winning the bid and making a rational profit, is the target of private investors (Yu, 2006). However, the existing pricing for products or services of PPP project lacks theoretical foundation and scientific pricing rule, which leads the concession price to be fixed either too high or too low (Li, 2007). A comprehensive review of recent literatures on concession pricing indicates that studies in this field are rather thin on the ground. Only a small number of quantitative techniques have been used by participants and researchers to design concession pricing models for PPP projects such as Net Present Value, nonlinear regression model, and Monte Carlo simulation. A systematic consideration of pricing parameters for concession pricing design and price adjustment mechanism for PPP projects is still not available. Studies related to concession price determination from research periodicals such as Journal of Construction Engineering and Management, Journal of Management in Engineering, Automation in Construction, Construction Management and Economics and International Journal of Project Management are summarized in Table 1.Concession pricing belongs to the category of semi-structured decision-making; it faces many complicated and changeable decision settings. Some parameters can be quantified, such as the engineering project's total investment cost, operation cost, loan interest, etc. While a considerable number of deterministic parameters cannot be described in quantifiable terms, such as the degree of government support, price competitiveness, etc (Yu, 2006). Using a mathematical model to determine concession pricing problems will often neglect much of important decision-making information that cannot be quantified (Yu, 2006). Therefore, price adjustment is necessarily integrated into the pricing process. Moreover, parameters of PPP concession pricing involves a complex structure arising from (1) multiple interdependent components affecting concession price internally through cause and effect feedback loops; and (2) the risk factors that may influence pricing parameters dramatically. To capture the complexity and dynamism of parameters in a holistic manner, the determination of concession price is divided into two parts in this study, 1) calculate the basic price of a PPP highway project based on quantifiable parameters by using System Dynamics model. 2) Make consideration of the effect of risk factors on quantifiable pricing parameters and adjust the basic concession price to form final price. Basic price determination occupies a rather important position in price decision making. It is the bottleneck of the concession pricing and also the focus of this study.