عنوان انگلیسی
The value of Value-at-Risk: A theoretical approach to the pricing and performance of risk measurement systems
دانلود فوری مقاله + سفارش ترجمه 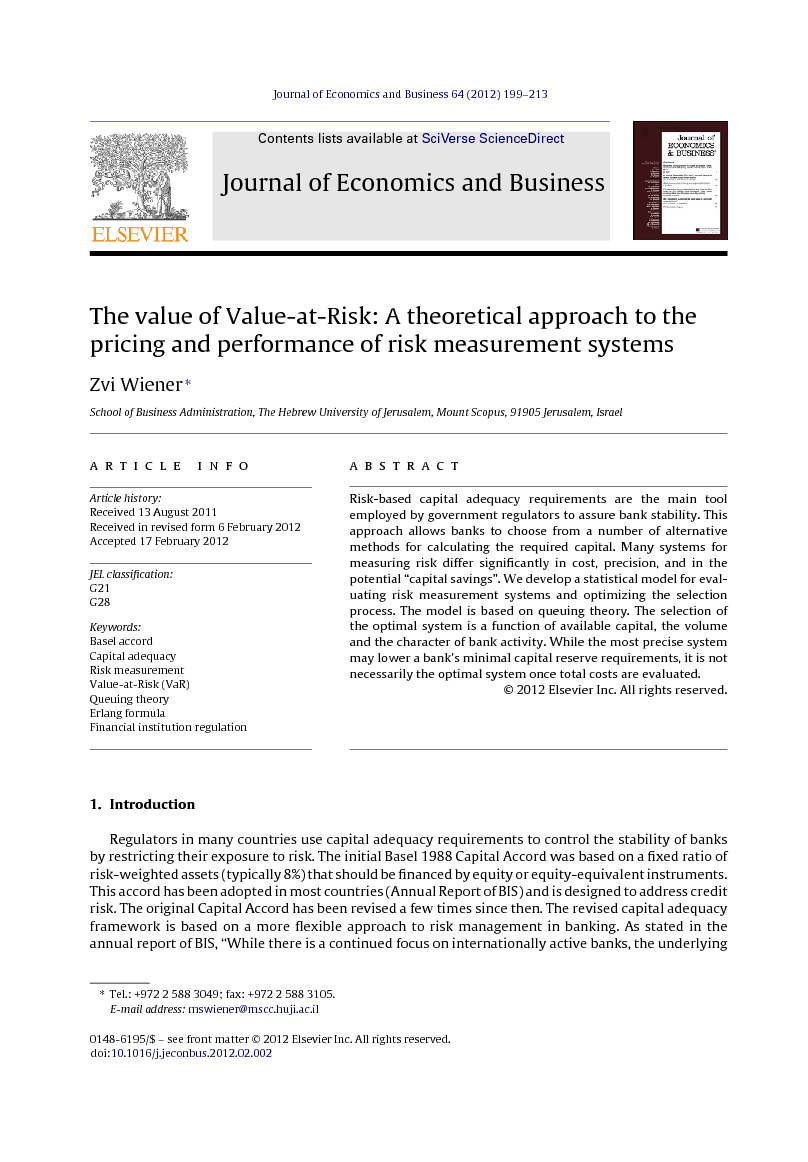 Risk-based capital adequacy requirements are the main tool employed by government regulators to assure bank stability. This approach allows banks to choose from a number of alternative methods for calculating the required capital. Many systems for measuring risk differ significantly in cost, precision, and in the potential “capital savings”. We develop a statistical model for evaluating risk measurement systems and optimizing the selection process. The model is based on queuing theory. The selection of the optimal system is a function of available capital, the volume and the character of bank activity. While the most precise system may lower a bank's minimal capital reserve requirements, it is not necessarily the optimal system once total costs are evaluated.

The current regulatory environment in financial markets around the world encourages the adoption of active risk management. Since Basel 1998 and Basel 2000, regulatory requirements in a growing number of countries allow banks to depart from fixed capital adequacy rates and develop internal models better tailored to the task of assessing asset risk. Sophisticated risk measurement systems enable financial institutions to reduce minimal capital requirements by using more precise models. To take advantage of this opportunity, banks have to discover the optimal tools for measuring risk. Each bank must factor in the level of precision with which it chooses to measure risk. The selection of an optimal model affects not only the level of capital required to meet regulatory requirements, but can have a significant impact on both the character and scope of a bank's business activity. Opportunity costs can be avoided and profitability increased through the selection of the proper risk measurement system. In this paper, we provide a framework for the optimal selection of a risk measurement system under the assumption that a higher degree of accuracy corresponds to a higher cost to the bank. We limit our analysis to the simplest use of such a system – the reduction of the required capital, however the same approach can be extended to incorporate additional benefits to active risk management.15 This model reflects the reality that many small to medium sized banks are interested in risk measurement models mainly due to the pressure of regulators through capital requirements. The suggested model is simple, intuitive and flexible. The results of the model demonstrate that the most accurate (and therefore expensive) systems are appropriate for bigger banks with low capitalization, which operate in an unstable environment. These banks face radical and dynamic variations between high and low levels of activity. The higher the capital cushion the lower the cost of an optimal risk measurement system. Similarly, a stable business environment (many small independent projects) decreases the optimal cost, while a more volatile environment (fewer, short-term larger projects) requires a more sophisticated system at a higher cost. An extension of this model might incorporate an analysis of various types of activity, such as loans and deposits with a discount window. Due to the simplicity and ease of use of this model, further variations can be introduced into the general framework presented here.