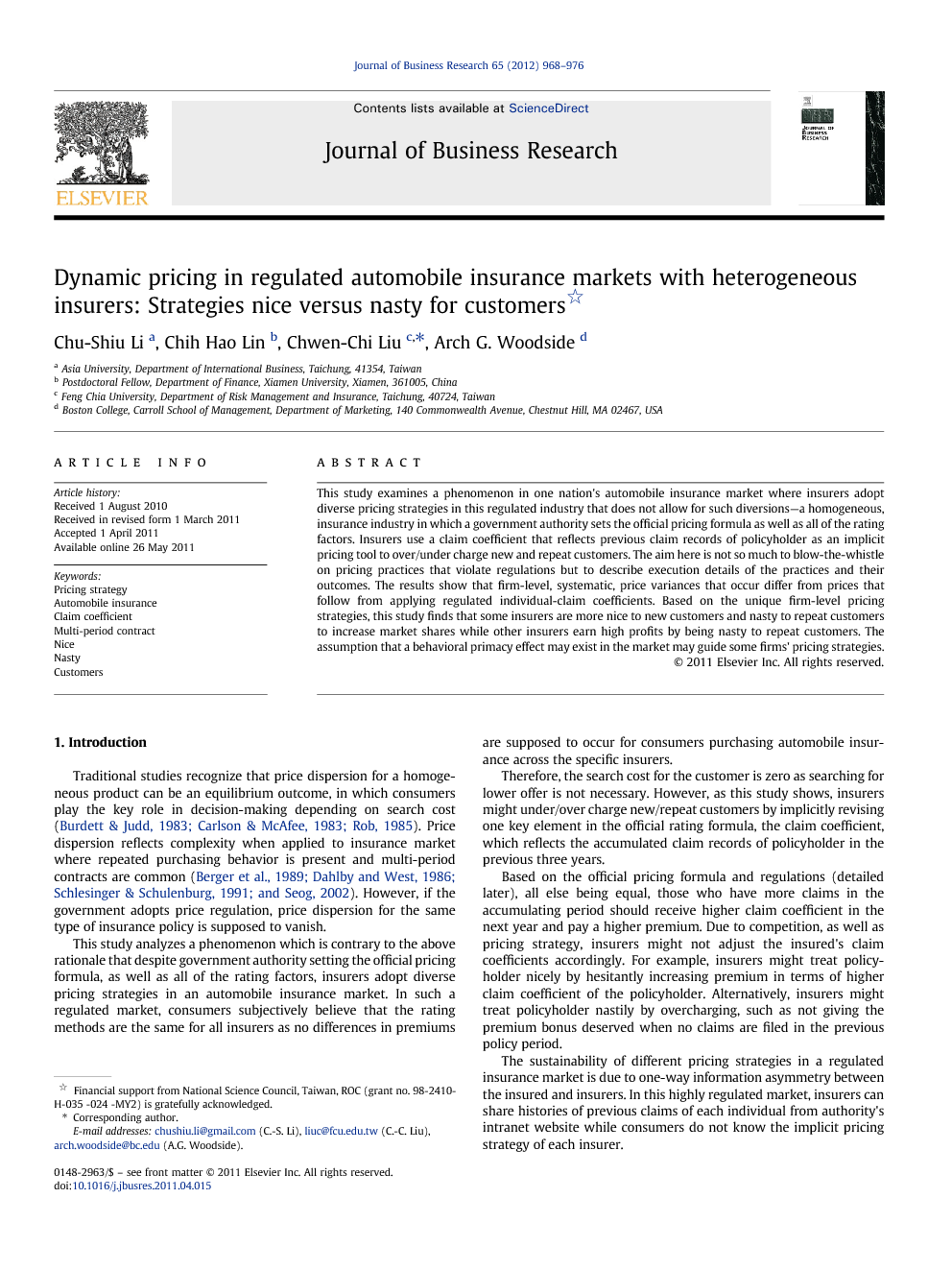 This study examines a phenomenon in one nation's automobile insurance market where insurers adopt diverse pricing strategies in this regulated industry that does not allow for such diversions—a homogeneous, insurance industry in which a government authority sets the official pricing formula as well as all of the rating factors. Insurers use a claim coefficient that reflects previous claim records of policyholder as an implicit pricing tool to over/under charge new and repeat customers. The aim here is not so much to blow-the-whistle on pricing practices that violate regulations but to describe execution details of the practices and their outcomes. The results show that firm-level, systematic, price variances that occur differ from prices that follow from applying regulated individual-claim coefficients. Based on the unique firm-level pricing strategies, this study finds that some insurers are more nice to new customers and nasty to repeat customers to increase market shares while other insurers earn high profits by being nasty to repeat customers. The assumption that a behavioral primacy effect may exist in the market may guide some firms' pricing strategies.

Traditional studies recognize that price dispersion for a homogeneous product can be an equilibrium outcome, in which consumers play the key role in decision-making depending on search cost (Burdett and Judd, 1983, Carlson and McAfee, 1983 and Rob, 1985). Price dispersion reflects complexity when applied to insurance market where repeated purchasing behavior is present and multi-period contracts are common (Berger et al., 1989, Dahlby and West, 1986, Schlesinger and Schulenburg, 1991 and Seog, 2002). However, if the government adopts price regulation, price dispersion for the same type of insurance policy is supposed to vanish. This study analyzes a phenomenon which is contrary to the above rationale that despite government authority setting the official pricing formula, as well as all of the rating factors, insurers adopt diverse pricing strategies in an automobile insurance market. In such a regulated market, consumers subjectively believe that the rating methods are the same for all insurers as no differences in premiums are supposed to occur for consumers purchasing automobile insurance across the specific insurers. Therefore, the search cost for the customer is zero as searching for lower offer is not necessary. However, as this study shows, insurers might under/over charge new/repeat customers by implicitly revising one key element in the official rating formula, the claim coefficient, which reflects the accumulated claim records of policyholder in the previous three years. Based on the official pricing formula and regulations (detailed later), all else being equal, those who have more claims in the accumulating period should receive higher claim coefficient in the next year and pay a higher premium. Due to competition, as well as pricing strategy, insurers might not adjust the insured's claim coefficients accordingly. For example, insurers might treat policyholder nicely by hesitantly increasing premium in terms of higher claim coefficient of the policyholder. Alternatively, insurers might treat policyholder nastily by overcharging, such as not giving the premium bonus deserved when no claims are filed in the previous policy period. The sustainability of different pricing strategies in a regulated insurance market is due to one-way information asymmetry between the insured and insurers. In this highly regulated market, insurers can share histories of previous claims of each individual from authority's intranet website while consumers do not know the implicit pricing strategy of each insurer. This study shows that different pricing strategies are associated with likely firm objectives that focus on profits versus market share. Based on the empirical results, this paper explains the rationale behind the findings in terms of marketing and pricing theory. One strategic pricing theory, the behavioral primacy effect (i.e., the influence of behavioral endowment effect; Thaler, 1980), fits the explanation that customers tend to repeat-buy the initial brand that they purchased more often than other brands when their use of the first brand is favorable given the same purchasing environment (Woodside & Uncles, 2005). Thus, some firms may adopt initial low-price strategies that can increase the probability of new customers trying their products and then increase their prices after these new customers return-to-buy a second time or in later time periods. In addition, from the “memory-based process” argument of imprinting theory (first experience without considering alternative options), most customers remember their best experience from the first purchase. By applying the above theories to the automobile insurance market, it insurers would undercharge for premiums to gain the satisfaction of new customers. However, when the insured renews the contract, the insurer may not decrease the premium that should follow from a good driving record (no claims) when offering such a bonus is standard practice in the insurance market. Not offering the bonus reflects a higher premium than should be applicable for the repeat buyers; insurers applying such a strategy may expect that most repeat buyers are insensitive to the overcharge. In other words, the insurance company can earn excess profit from long-term high-premium contracts to subsidize the losses from short-term low-premium contracts. Kocas and Bohlmann (2008) stress that several empirical findings about pricing strategies remain puzzling; for example, within the same market, some small retailers decide to discount deeply, whereas others forgo the price-sensitive switchers and price high. Theory and research that explain such strategies are helpful. The present article demonstrates that pricing variations counter to regulation requirements do occur across firms for a homogenous product in a highly regulated market and provides explanations for their occurrence. In addition, the findings of this paper highlight the incapability of consumers to judge the fairness of insurance premiums which is similar to the findings of Shapira and Venezia (2008) in that amateurs (versus professionals) tend to buy too much insurance (low deductible) due to the lack of ability to select a better deal. Prior studies describe linkages from relative firm size to customer retention rates and profitability (McGahan & Ghemawat, 1994). The findings of the present study provide alternative views in that, in addition to market share, different pricing policies (nice versus nasty) differ in the abilities to attract customers and increase profits. Following the identification of the topic and literature review in 1 and 2 describes the rating system and pricing of insurance premiums in a highly-regulated market. Section 3 formally states hypotheses that follow from the literature review. Section 4 describes the data to test the hypotheses. Section 5 presents the analyses of the data. Section 6 discusses the findings and offers limitations and conclusions.

Considering some rationales based on the evidence, a natural question arises. How does price dispersion exists under symmetric information? Intuitively, with full information, a multi-period competitive contract where the risk types of customers are observable consists of a one-period contract repeated in each period. The setting of premium will fully reflect the customers' own real risks. No gains should occur for multi-period competitive contracting (Cooper and Hayes, 1987 and Townsend, 1982). The insurers do not have any information-based market power for sharing information among insurers. No additional incentives exist for customers with good claim history to stay with the same insurers to gain the benefits from the deduction of the premium or for customers with bad claim history to switch to other insurers to avoid premium increases. However, in the real world, if the insured is insensitive to the changes in premium when they renew a long-term contract, then the price-setting strategies by the insurer might differ for first-time customers (short-term contracts) and repeat customers (long-term contracts) even under full information. Alternatively, the rationale for the insurers to undercharge the insured connects to a practical issue — time lag between pricing and claims filing. Prior research (Li et al., 2008) based on the Taiwan automobile insurance market finds extensive customer claims-filings in the last policy month. However, policyholders usually renew insurance contracts one or two months before their expiration. Therefore, offering a price without taking into account the claims filed in the last policy month is possible. But, for long term customers, the insurer should not repeat the same pattern for two years. However, Table 6 shows that under charging indeed occurs for two years for some insurers. If the time lag problem on premium adjusting is not severe, another plausible reason to undercharge is to be nice to increase market share. Based on the economies of scale of insurance industry, the more policies sold, the less management cost-per-policy share. The increase in market share at the cost of undercharging might be profitable eventually. For example, the 3 largest insurers, based on the sample data, adopt strategy type A (nice for all years). From the demand side, given the regulated pricing formula, why do the insured accept an overcharged insurance premium? In fact, most policyholders likely have no idea about the rules and regulations governing pricing relevant to their policies, and other pricing factors. Consumers appear to buy insurance products from agents without asking the details about how premiums are calculated relevant to their insurance purchases (Taylor & Woodside, 1981). Similarly, Carlin (2009) discusses a case in which the complexity in retail financial market makes consumers more ignorant and provides the incentive for firms to adopt price increase strategy. In addition, consumers in Taiwan may have the illusion of psychological monopoly (Sundie et al., 2008) in mind without seeking the second insurer or agent. In Taiwan, the ignorance of bonus–malus system of automobile insurance leads to the insured accepting a renewed premium which is the same as the previous year is even if the insurer should reduce premium due to no claims. Insurer 4 might belong to such a case so that even though it is nasty to all it retains a relatively high market share (10.7% for all polices and 11.9% for sample polices). Limitations to the present study include its focus on one country. Replication research is necessary to confirm the extent of the relevance of the findings to additional national contexts. Also, while pricing strategies are the key issue in this study, factors such as company size, capital, underwriting policy, and other factors might also play some roles relating to GPR and market share, but the study of these potential influences is absent from this study. Future research needs to consider possible interactions of these factors on the findings of the present study.