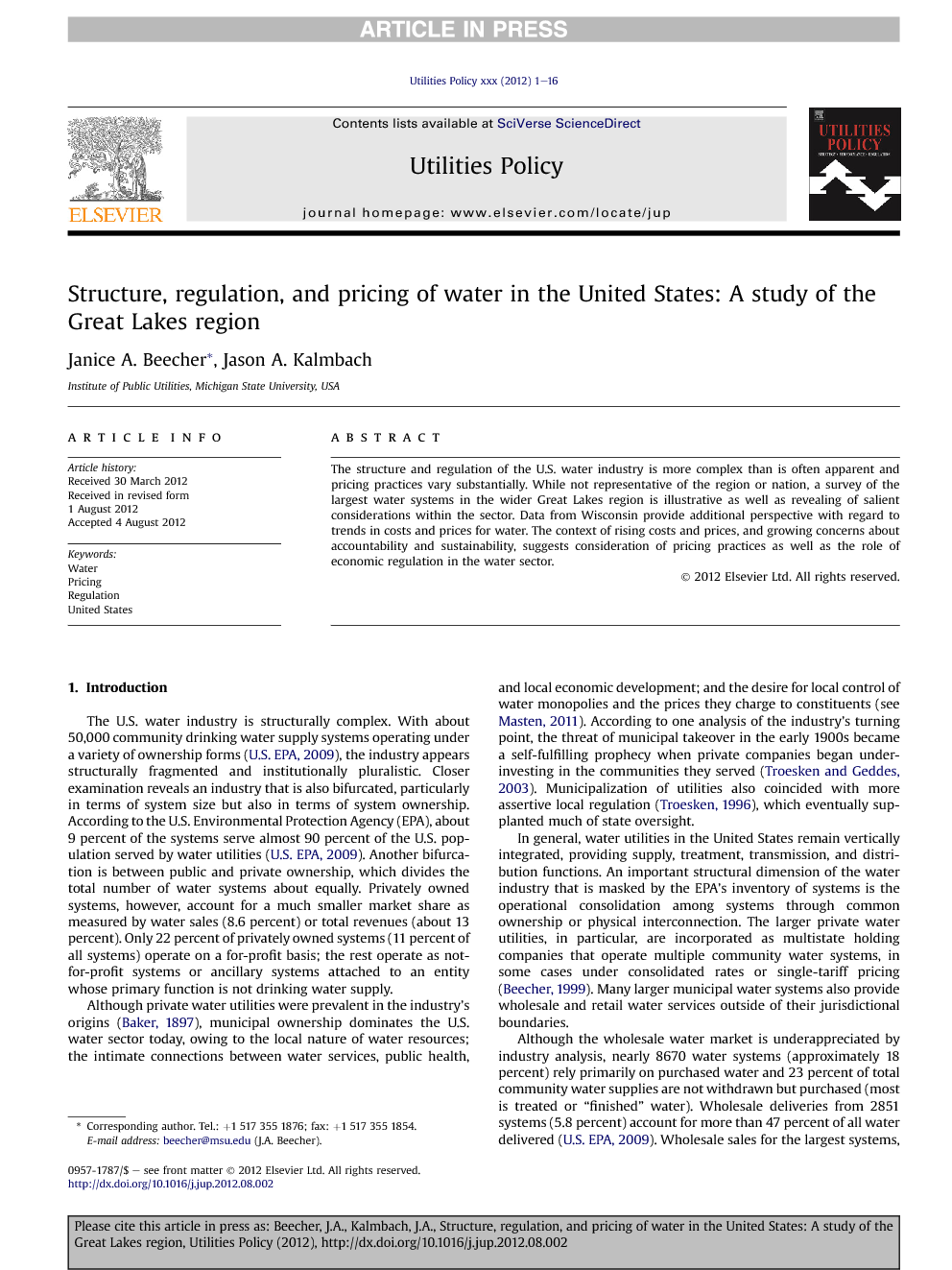 The structure and regulation of the U.S. water industry is more complex than is often apparent and pricing practices vary substantially. While not representative of the region or nation, a survey of the largest water systems in the wider Great Lakes region is illustrative as well as revealing of salient considerations within the sector. Data from Wisconsin provide additional perspective with regard to trends in costs and prices for water. The context of rising costs and prices, and growing concerns about accountability and sustainability, suggests consideration of pricing practices as well as the role of economic regulation in the water sector.

The U.S. water industry is structurally complex. With about 50,000 community drinking water supply systems operating under a variety of ownership forms (U.S. EPA, 2009), the industry appears structurally fragmented and institutionally pluralistic. Closer examination reveals an industry that is also bifurcated, particularly in terms of system size but also in terms of system ownership. According to the U.S. Environmental Protection Agency (EPA), about 9 percent of the systems serve almost 90 percent of the U.S. population served by water utilities (U.S. EPA, 2009). Another bifurcation is between public and private ownership, which divides the total number of water systems about equally. Privately owned systems, however, account for a much smaller market share as measured by water sales (8.6 percent) or total revenues (about 13 percent). Only 22 percent of privately owned systems (11 percent of all systems) operate on a for-profit basis; the rest operate as not-for-profit systems or ancillary systems attached to an entity whose primary function is not drinking water supply. Although private water utilities were prevalent in the industry's origins (Baker, 1897), municipal ownership dominates the U.S. water sector today, owing to the local nature of water resources; the intimate connections between water services, public health, and local economic development; and the desire for local control of water monopolies and the prices they charge to constituents (see Masten, 2011). According to one analysis of the industry's turning point, the threat of municipal takeover in the early 1900s became a self-fulfilling prophecy when private companies began underinvesting in the communities they served (Troesken and Geddes, 2003). Municipalization of utilities also coincided with more assertive local regulation (Troesken, 1996), which eventually supplanted much of state oversight. In general, water utilities in the United States remain vertically integrated, providing supply, treatment, transmission, and distribution functions. An important structural dimension of the water industry that is masked by the EPA's inventory of systems is the operational consolidation among systems through common ownership or physical interconnection. The larger private water utilities, in particular, are incorporated as multistate holding companies that operate multiple community water systems, in some cases under consolidated rates or single-tariff pricing (Beecher, 1999). Many larger municipal water systems also provide wholesale and retail water services outside of their jurisdictional boundaries. Although the wholesale water market is underappreciated by industry analysis, nearly 8670 water systems (approximately 18 percent) rely primarily on purchased water and 23 percent of total community water supplies are not withdrawn but purchased (most is treated or “finished” water). Wholesale deliveries from 2851 systems (5.8 percent) account for more than 47 percent of all water delivered (U.S. EPA, 2009). Wholesale sales for the largest systems, which utilize surface water supplies, account for a quarter of revenues from water sales. In other words, the U.S. water industry is more interconnected than might be recognized. The structural character of the industry is also related to the nature of economic regulation. Privately owned water utilities are almost invariably regulated by state public utility commissions. Only a handful of commissions (Georgia, Michigan, Minnesota, North Dakota, South Dakota, and Washington, D.C.) have no authority over the sector (Beecher, 2011a). Several states, however, have authority that extends to certain non-private systems.1 Wisconsin is unique nationally in having comprehensive authority for the municipal water sector. State economic regulation of the water sector follows the traditional rate-base/rate-of-return (RBROR) methodology that prevails in the United States for distribution oriented electricity and natural gas utilities (see Beecher, 2011b). Water utilities are quintessential monopolies and regulation provides a proxy for competition in the context of market failure. Regulators ensure that spending is prudent and prices are just. A challenge for water-sector regulators is the contrast between larger utilities and the many small private companies that lack scale as well as technical, financial, and managerial capacity (U.S. EPA, 1999). Returns to scale for the water sector are significant but not unlimited because economies in production and treatment are offset by diseconomies in water distribution (see Abbott and Cohen, 2009).2 Regulation probably has more influence than the industry's ownership profile implies. Many private utilities (the unit considered by economic regulators) operate multiple water systems (the unit considered by environmental regulators). The uniform systems of accounts for water utilities developed by the National Association of Regulatory Utility Commissioners (NARUC, 1996) as well as the “utility basis” for ratemaking (AWWA, 2000) and other generally accepted regulatory practices are used by many unregulated water systems.3 These practices include cost-based or full-cost water pricing (Beecher, 2011b), with limits to subsidies and transfers that distort price signals and undermine efficiency in both production and consumption. Economic regulation exacts an administrative cost and is itself an imperfect institution. When well implemented, however, regulation can promote contemporary efficiency and sustainability goals for all water systems, regardless of ownership structure. The water industry's complex structure is a challenge for both public policy and empirical investigation. Survey sampling, validity, and reliability limitations make generalization problematic. Several water rate surveys have been published over the years. Some are national in focus (e.g., Raftelis, 2010) while many others are more regional or state specific.4 The quantitative research on how price and income affect consumer behavior is also extensive (see Dalhuisen et al., 2003; Olmstead and Stavins, 2007). Although water demand is relatively price inelastic, it is not perfectly so and both rate levels and rate structures influence consumption behavior. Growing concerns about water resources, along with rising prices, are bringing increasing attention to the dynamics among cost, price, demand, and the financial sustainability of water systems. Although water rate studies abound, few appreciate the intricate details within this salient but rather obscure and arcane area of policymaking. This study opted for a stratified approach that deliberately sacrifices representativeness in return for a more in-depth and hopefully insightful analysis of industry structure, economic regulation, and pricing practices. The methodology underscores the importance of accurate and thorough data collection for capturing the complexity of utility ratemaking practices. In many respects, it is meant less as a formal survey than a descriptive case study of the larger water utilities in the wider Great Lakes region of the United States.

For good or for bad, persistent structural and regulatory fragmentation of the U.S. water sector makes for a diversity of approaches to utility pricing and thus a wide range of accepted practices. The Great Lakes Water Rate Survey provides both information and insight into prevailing ratemaking practices for larger systems in the wider region. Although not generalizable, the findings are suggestive along a variety of issues. First, water rates in the region are somewhat traditional and pragmatic in terms of continued reliance on decreasing-block and uniform rate forms. National surveys tend to see greater reliance in other regions on rate structures considered conservation oriented (Raftelis, 2010). This finding may be justified in part by the relative abundance of water in the region and other favorable cost conditions. Nonetheless, many systems in the region are providing information about conservation to their customers and some have introduced rates that are considered more efficiency-oriented. Seasonal rates present an opportunity for the region given increased water usage and capacity requirements in summer months. The use of peaking-factor rates was an especially interesting finding in terms of a commercial rate oriented strongly toward cost assignment and load management. Second, what customers pay for water service is highly variable. Some customers pay relatively higher fixed charges, in many cases to support the cost of fire protection. Structural variables, namely system ownership, appear to influence rate structures and levels. Charges by private water companies are comparatively higher and scale economies are not apparent, particularly for the private sector. Scale economies, although considered important at the lower end of the spectrum, may not differentiate prices for water systems already large in size; in fact, diseconomies associated with distribution and other costs may become a concern. Third, the research process itself was revealing. While most tariffs were relatively easy to secure, much room for improvement can be found in the presentation and communication of tariff information to customers. Average water customers should be able to readily find and interpret the rates that determine their water bills. Sample bills and bill calculators are useful, as is an understandable narrative explaining costs, rates, and system intentions. Finally, the cost analysis is consistent with observed inflation in water prices, which exceeds the overall rate of inflation in the U.S. (Beecher, 2012). Pressure on water costs is due mainly to the substantial fixed costs associated with replacing the nation's aging infrastructure (AWWA, 2012). Pressure on water prices is due to the movement toward cost-based and more efficient prices, exacerbated by historical underpricing by some non-private systems, loss of subsidies and transfers, and flat or declining demand (Coomes et al., 2009). The combination of higher bills and lesser usage is a source of considerable frustration for water customers and utility managers alike (Beecher, 2010). Of course, water bills should be less than they would be without beneficial efficiency gains and lesser still over the long run if capital and operating costs can be avoided. The results here are also suggestive of the potential value of economic regulation beyond privately owned water utility monopolies (Beecher, 2009). Given variability in water costs, comparability in water prices is not expected. Given variability in ratemaking practices, prices may not be cost-reflective. Rising costs and prices will place growing economic and political stress on water systems. Regulated rates for non-private systems, which presumably reflect the full (unsubsidized) cost of service, were generally lower than rates for unregulated non-private systems and regulated private systems. Given policy imperatives of sustainable water systems and affordable water service, this finding seems worthy of further consideration. Although by no means the only institutional alternative, extension of economic regulation to the pubic sector is a proven governance option. Regulation can advance the adoption of principles and practices that have stood the tests both of time and judicial review. Regulation serves the public interest by balancing the interests of utilities (fair returns) and ratepayers (just prices). Regulation can also provide transparency and accountability as well as general uniformity in ratemaking. Compared to most local governments, state agencies possess greater technical and institutional capacities for regulatory oversight. Independent regulators can also help depoliticize the ratemaking process and give coverage to local officials who may lack political will for difficult decisions. Ensuring that prices reflect the prudent cost of service, the central purpose of economic regulation, is a legitimate social goal for all water utilities.