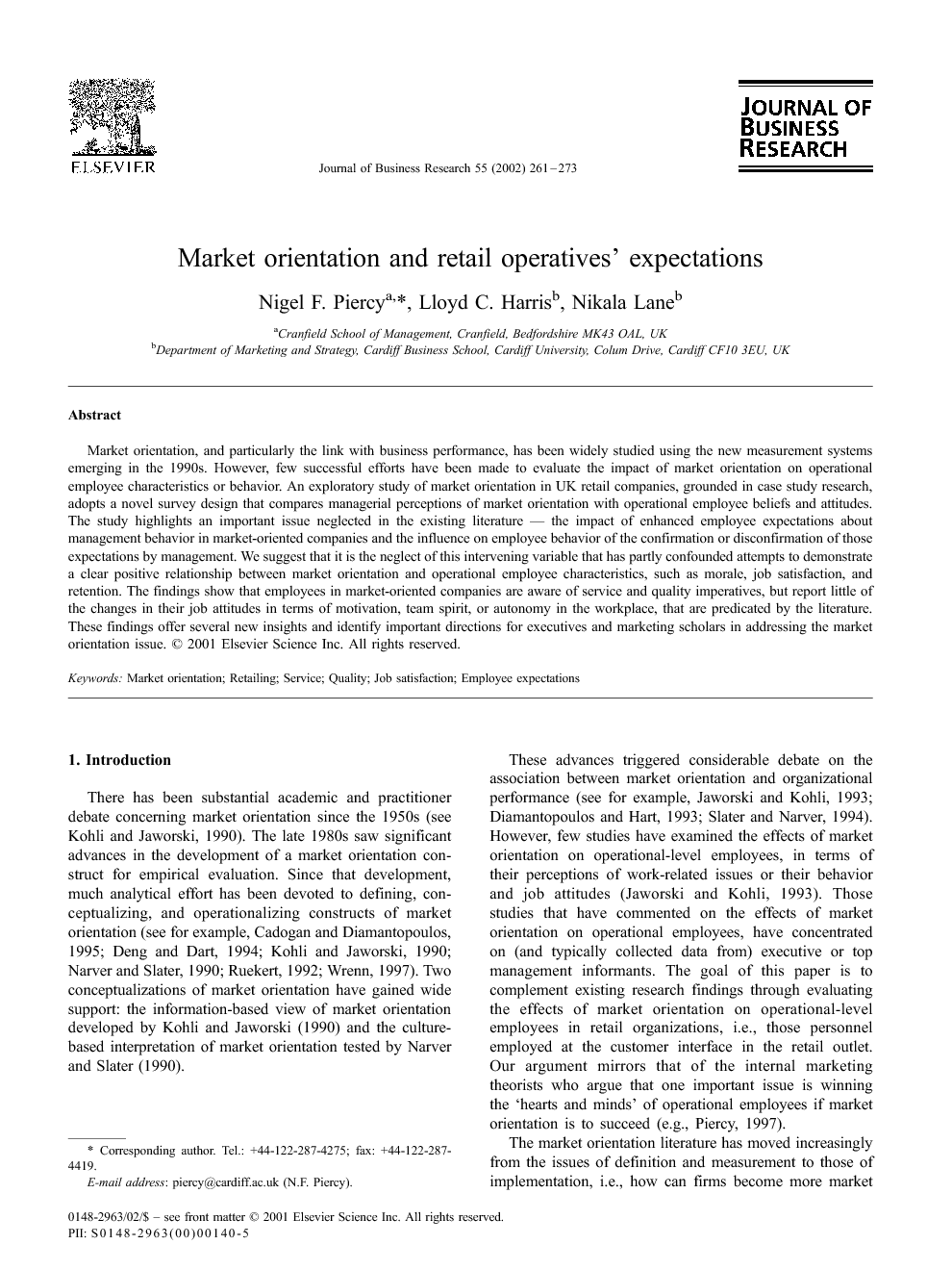 Market orientation, and particularly the link with business performance, has been widely studied using the new measurement systems emerging in the 1990s. However, few successful efforts have been made to evaluate the impact of market orientation on operational employee characteristics or behavior. An exploratory study of market orientation in UK retail companies, grounded in case study research, adopts a novel survey design that compares managerial perceptions of market orientation with operational employee beliefs and attitudes. The study highlights an important issue neglected in the existing literature — the impact of enhanced employee expectations about management behavior in market-oriented companies and the influence on employee behavior of the confirmation or disconfirmation of those expectations by management. We suggest that it is the neglect of this intervening variable that has partly confounded attempts to demonstrate a clear positive relationship between market orientation and operational employee characteristics, such as morale, job satisfaction, and retention. The findings show that employees in market-oriented companies are aware of service and quality imperatives, but report little of the changes in their job attitudes in terms of motivation, team spirit, or autonomy in the workplace, that are predicated by the literature. These findings offer several new insights and identify important directions for executives and marketing scholars in addressing the market orientation issue.

Our study of market orientation in UK retail companies has attempted to generate new insights into the conventional literature by the comparison of managerial perceptions of market orientation with employee beliefs and attitudes in a relatively novel approach. While surrounded by several important research limitations, the findings are notable in several respects. We found clear evidence that market orientation is associated with employee beliefs about service quality and customer focus. This suggests that at least in market-oriented firms employees are aware of the importance placed by management on service quality and customer focus. However, other study findings cast substantial doubt on the extent to which this awareness may produce behavior change and enhanced performance at the customer interface. We found that market orientation was highly associated with employee beliefs that management should plan strategically and that the organization should adopt a long-term orientation. This highlights a new issue not previously evaluated in the market orientation literature — the nature of employee expectations about certain types of managerial behavior in developing and implementing market orientation, and the importance of the confirmation or disconfirmation of these employee expectations on important outcomes in the workplace and the marketplace. The identification of this issue for study has important implications for management and for scholars of market orientation. The significance of these findings is underlined by the study results showing little clear relationship between market orientation and important operational-level employee job attitudes. One interpretation of these findings is that employees in market-oriented companies are aware of service and customer focus imperatives, but also form higher expectations of management behavior, while evidencing little change in their own attitudes. The degree to which this finding can be validated, then the more urgent the need for managerial and research focus on the linkages between market orientation and employee characteristics and behavior.