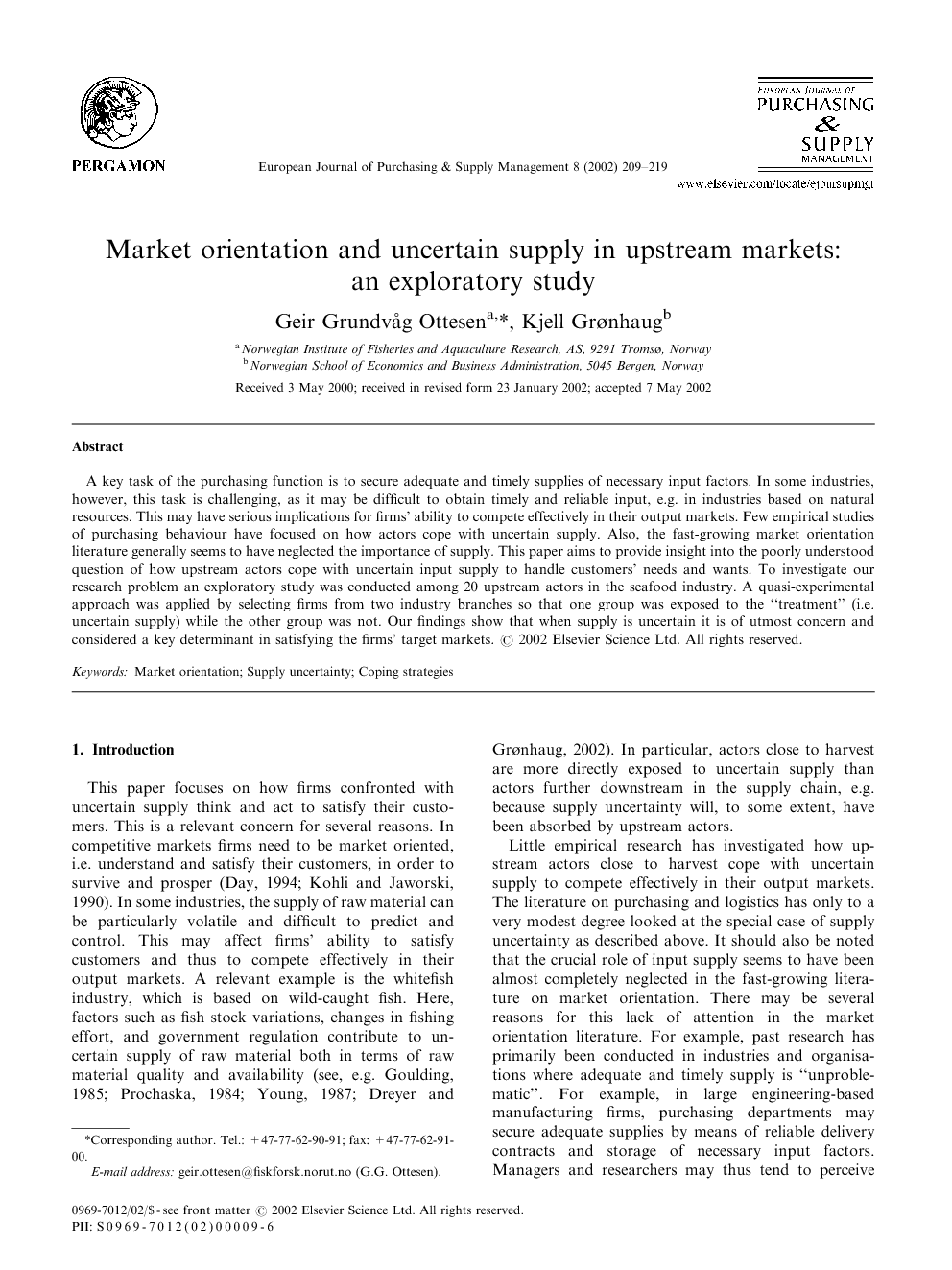 A key task of the purchasing function is to secure adequate and timely supplies of necessary input factors. In some industries, however, this task is challenging, as it may be difficult to obtain timely and reliable input, e.g. in industries based on natural resources. This may have serious implications for firms’ ability to compete effectively in their output markets. Few empirical studies of purchasing behaviour have focused on how actors cope with uncertain supply. Also, the fast-growing market orientation literature generally seems to have neglected the importance of supply. This paper aims to provide insight into the poorly understood question of how upstream actors cope with uncertain input supply to handle customers’ needs and wants. To investigate our research problem an exploratory study was conducted among 20 upstream actors in the seafood industry. A quasi-experimental approach was applied by selecting firms from two industry branches so that one group was exposed to the “treatment” (i.e. uncertain supply) while the other group was not. Our findings show that when supply is uncertain it is of utmost concern and considered a key determinant in satisfying the firms’ target markets.

This paper focuses on how firms confronted with uncertain supply think and act to satisfy their customers. This is a relevant concern for several reasons. In competitive markets firms need to be market oriented, i.e. understand and satisfy their customers, in order to survive and prosper (Day, 1994; Kohli and Jaworski, 1990). In some industries, the supply of raw material can be particularly volatile and difficult to predict and control. This may affect firms’ ability to satisfy customers and thus to compete effectively in their output markets. A relevant example is the whitefish industry, which is based on wild-caught fish. Here, factors such as fish stock variations, changes in fishing effort, and government regulation contribute to uncertain supply of raw material both in terms of raw material quality and availability (see, e.g. Goulding, 1985; Prochaska, 1984; Young, 1987; Dreyer and Grønhaug, 2002). In particular, actors close to harvest are more directly exposed to uncertain supply than actors further downstream in the supply chain, e.g. because supply uncertainty will, to some extent, have been absorbed by upstream actors. Little empirical research has investigated how upstream actors close to harvest cope with uncertain supply to compete effectively in their output markets. The literature on purchasing and logistics has only to a very modest degree looked at the special case of supply uncertainty as described above. It should also be noted that the crucial role of input supply seems to have been almost completely neglected in the fast-growing literature on market orientation. There may be several reasons for this lack of attention in the market orientation literature. For example, past research has primarily been conducted in industries and organisations where adequate and timely supply is “unproblematic”. For example, in large engineering-based manufacturing firms, purchasing departments may secure adequate supplies by means of reliable delivery contracts and storage of necessary input factors. Managers and researchers may thus tend to perceive supply as less problematic, so that it does not attract their attention. The main research question underlying this research is: “How do upstream actors (managers) exposed to uncertain supply understand and adjust to their target customers?” This is a highly relevant question, because if the firm is unable to attract and satisfy a sufficient number of customers, it will be driven out of business. The concern for the firm's target markets is particularly emphasised in the extensive and fast-growing literature on market orientation. The remainder of this paper is organised as follows: In the next section, we first address the concept of market orientation and how it was developed. This section also includes a discussion of how the research context in which the construct of market orientation was originally developed may have influenced its present focus. In the third section, we draw on the marketing and purchasing literature to address the link between market orientation and supply. In the fourth section, we proceed to address the issue of how concepts are understood and used, including how concepts become elements of managers’ thinking, influencing their attention, worldview and behaviour. We then present the methodology of an exploratory study aimed at capturing how market orientation is understood and practised by top managers and their firms in two branches of the seafood industry. By comparing a group of top managers in firms exposed to uncertain supply (the whitefish branch) with a group of top managers in firms facing a relatively stable supply situation (the salmon-farming branch), we are able to assess whether and how uncertain supply influences market-oriented thinking and behaviour. Then we report our findings, draw conclusions, and highlight their implications.

The reported study provides insights into the under-researched question of how uncertain supply influences firms’ market orientation. Our findings show that current conceptualisations of market orientation as reflected in the marketing literature partly fail to capture the phenomena of market orientation as understood and practised by upstream firms facing uncertain supply of vital input factors. More specifically, our findings indicate that managers exposed to uncertain supplies subsume a new dimension (i.e. supply) in their understanding of market orientation. This finding deviates from the conventional view of market orientation as reflected in the seminal works by Kohli and Jaworski (1990) and Narver and Slater (1990). In this context, however, it makes perfect sense because, in order to satisfy customers and earn profits, firms must be able to secure adequate and timely supplies of raw materials. Because supply is volatile and uncertain, the supply situation is continuously watched and taken into account. The reported findings regarding how managers relate competitors and “macro-market” issues to market orientation also deviate from the conventional view of market orientation. It appears that specific competitors are perceived as less important to the firms and that it is more important for them to understand how different market segments behave in terms of supply and demand variations than it is to understand the behaviour of specific competitors. In the markets where these firms operate this makes sense. Here, there are many sellers, products are rather homogenous, and customer preferences are well known and relatively stable. In this situation the market price is influenced by fluctuations in supply which are primarily caused by variations in seller nations’ competitiveness. Hence, opportunities for making profit are driven by factors outside the influence of specific competitors. Rather than focusing on specific competitors, the ability to compete effectively is determined by the ability to foresee or anticipate changes in the supply in such industries as those studied here. These findings demonstrate that the development and use of “personal” concepts are influenced by the context in which they are developed (cf. Rosch et al., 1976), and also that such contextual influences may impact on the generalisability of theoretical constructs.