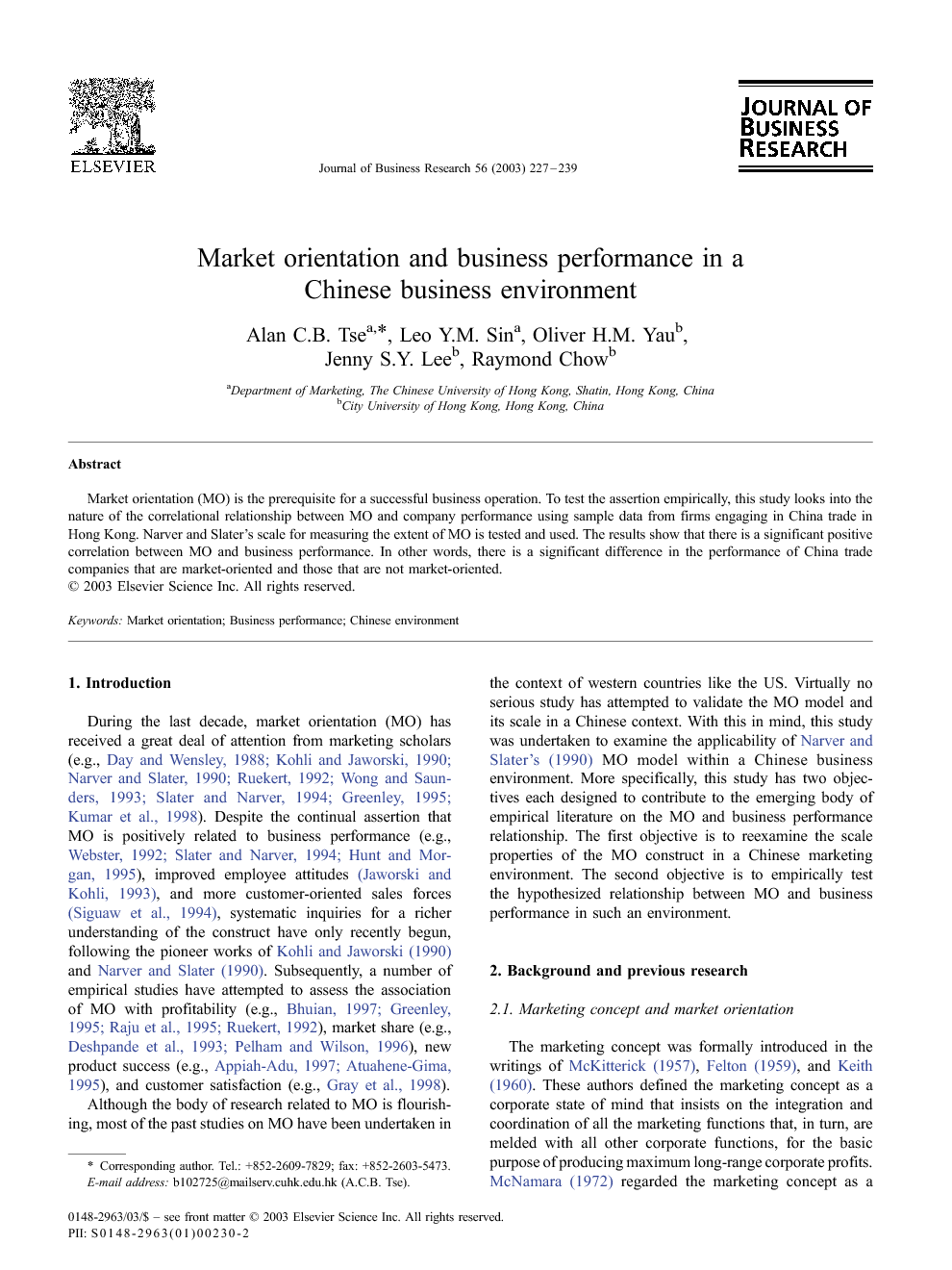 Market orientation (MO) is the prerequisite for a successful business operation. To test the assertion empirically, this study looks into the nature of the correlational relationship between MO and company performance using sample data from firms engaging in China trade in Hong Kong. Narver and Slater's scale for measuring the extent of MO is tested and used. The results show that there is a significant positive correlation between MO and business performance. In other words, there is a significant difference in the performance of China trade companies that are market-oriented and those that are not market-oriented.

During the last decade, market orientation (MO) has received a great deal of attention from marketing scholars (e.g., Day and Wensley, 1988, Kohli and Jaworski, 1990, Narver and Slater, 1990, Ruekert, 1992, Wong and Saunders, 1993, Slater and Narver, 1994, Greenley, 1995 and Kumar et al., 1998). Despite the continual assertion that MO is positively related to business performance (e.g., Webster, 1992, Slater and Narver, 1994 and Hunt and Morgan, 1995), improved employee attitudes (Jaworski and Kohli, 1993), and more customer-oriented sales forces (Siguaw et al., 1994), systematic inquiries for a richer understanding of the construct have only recently begun, following the pioneer works of Kohli and Jaworski (1990) and Narver and Slater (1990). Subsequently, a number of empirical studies have attempted to assess the association of MO with profitability (e.g., Bhuian, 1997, Greenley, 1995, Raju et al., 1995 and Ruekert, 1992), market share (e.g., Deshpande et al., 1993 and Pelham and Wilson, 1996), new product success (e.g., Appiah-Adu, 1997 and Atuahene-Gima, 1995), and customer satisfaction (e.g., Gray et al., 1998). Although the body of research related to MO is flourishing, most of the past studies on MO have been undertaken in the context of western countries like the US. Virtually no serious study has attempted to validate the MO model and its scale in a Chinese context. With this in mind, this study was undertaken to examine the applicability of Narver and Slater's (1990) MO model within a Chinese business environment. More specifically, this study has two objectives each designed to contribute to the emerging body of empirical literature on the MO and business performance relationship. The first objective is to reexamine the scale properties of the MO construct in a Chinese marketing environment. The second objective is to empirically test the hypothesized relationship between MO and business performance in such an environment.

Responding to the call for more research in divergent settings (e.g., Appiah-Adu, 1997, Bhuian, 1997 and Kohli et al., 1993), we suggest that a Chinese business environment represents a new empirical context that allows for an in-depth inquiry of the link between MO and business performance. This study provides a direct test of the applicability of a western paradigm to an Asian country with a different cultural and economic system. The MO model and the measures of MO available for data collection Kohli and Jaworski, 1990, Narver and Slater, 1990 and Ruekert, 1992 were developed in the context of the US cultural setting. Even though the continued internationalization of business operations has led to the conjecture that marketing theories and models might well be transportable across national and cultural borders (Buzzell, 1966), the direct application of these models and measures of MO to subjects from another culture without any validation might create a “category fallacy” as suggested by Kleinman (1977). Moreover, an uncritical emulation and extrapolation from the experiences of the US marketing practices to countries with different cultural and economic environments can lead to inefficient and ineffective performances of organizations in those countries Agarwal, 1993 and Kanumgo and Jaeger, 1990. Several researchers have therefore called for empirical work distinguishing “culture-bound” behavior from “universal” behavior (for example, Weinshall, 1977). To enhance our overall understanding of the concept of MO, therefore, we believe that an investigation of MO in a Chinese business environment is deemed necessary. Our findings suggest that Narver and Slater's scale with slight modification is a reliable and valid scale that can be used in a Chinese business environment. Although the scale was originally developed in the US at the strategic business unit (SBU) level, our findings suggest that the scale appears to capture well the construct of MO in a Chinese cultural context. Results of this study support the asserted correlational relationship between MO and company performance. Evidence provided by this research further strengthens the positive link between MO and company performance, a result obtained by previous studies of the same nature in the US and some other countries. The results of this study are not only relevant to academicians. From the point of view of a marketing practitioner engaging in China trade, the results obtained from our study should be helpful to them in collaborating or competing against Chinese enterprises. Up to now, no serious study has been conducted in a Chinese environment about the best business strategy despite the phenomenal growth of many Chinese economies like China, Hong Kong, and Taiwan, which have caught worldwide attention in recent years. Consequently, there are a lot of marketing myths in China marketing that are not founded on solid empirical evidence. For example, many firms hold the belief that Chinese economy and business life is preoccupied with good personal network of relationships or guanxi, therefore the best strategy for firms in China is to spend resources on cultivating personal relationships with their business partners, particularly government officials who are involved in a business transaction. In fact, many firms are willing to invest in relationship building at the expense of customer orientation. The reasons are as follows. Firstly, personal relationships in China are influenced by the Confucian ideology. According to Confucianism, an individual is fundamentally a social or relational being. Social order and stability depend on properly differentiated role relationships between particular individuals. Because of the emphasis on differentiated relationships, Chinese have a much stronger tendency to divide people into categories and treat them accordingly. That tendency to treat people differentially on the basis of one's relationship with them explains why having close relationship is of such importance in Chinese societies. Secondly, although the Chinese government has enacted thousands of laws, rules, and regulations for impersonal business dealings, many of them are not adequately enforced, and personal interpretations are often used in lieu of legal interpretation. Therefore, good relationship appears to be very helpful in dealing with the Chinese bureaucracy. The Chinese people traditionally prefer to rely on their contacts with those in power to get things done. Personal relationships and connections are often more important than legal obligation. Thirdly, information market imperfection in an uncertain environment, like China, also requires the emergence of personal relationship. Information passed through reliable sources is far more trustworthy, useful, and updated, thus saving search costs and allowing one to make faster decisions. Finally, pooling and coordinating resources from personal connections may act as a barrier hindering outsiders from penetrating the market. Despite the importance of relationship building, our findings suggest that a total relationship orientation without due regard given to MO may not be a sensible strategic orientation, high levels of MO were found to be associated with high levels of business performance. In other words, MO may still be a critical success factor for companies operating in China. Like their counterparts in the US, highly market-oriented firms in a Chinese business environment would outperform those with low level of MO. Currently, we know very little about the marketing practices of firms in Chinese economies. It is hoped that our study can stimulate more studies on the strategic behaviors of firms in these economies, as well as to make more potential and relevant contributions to the business literature.