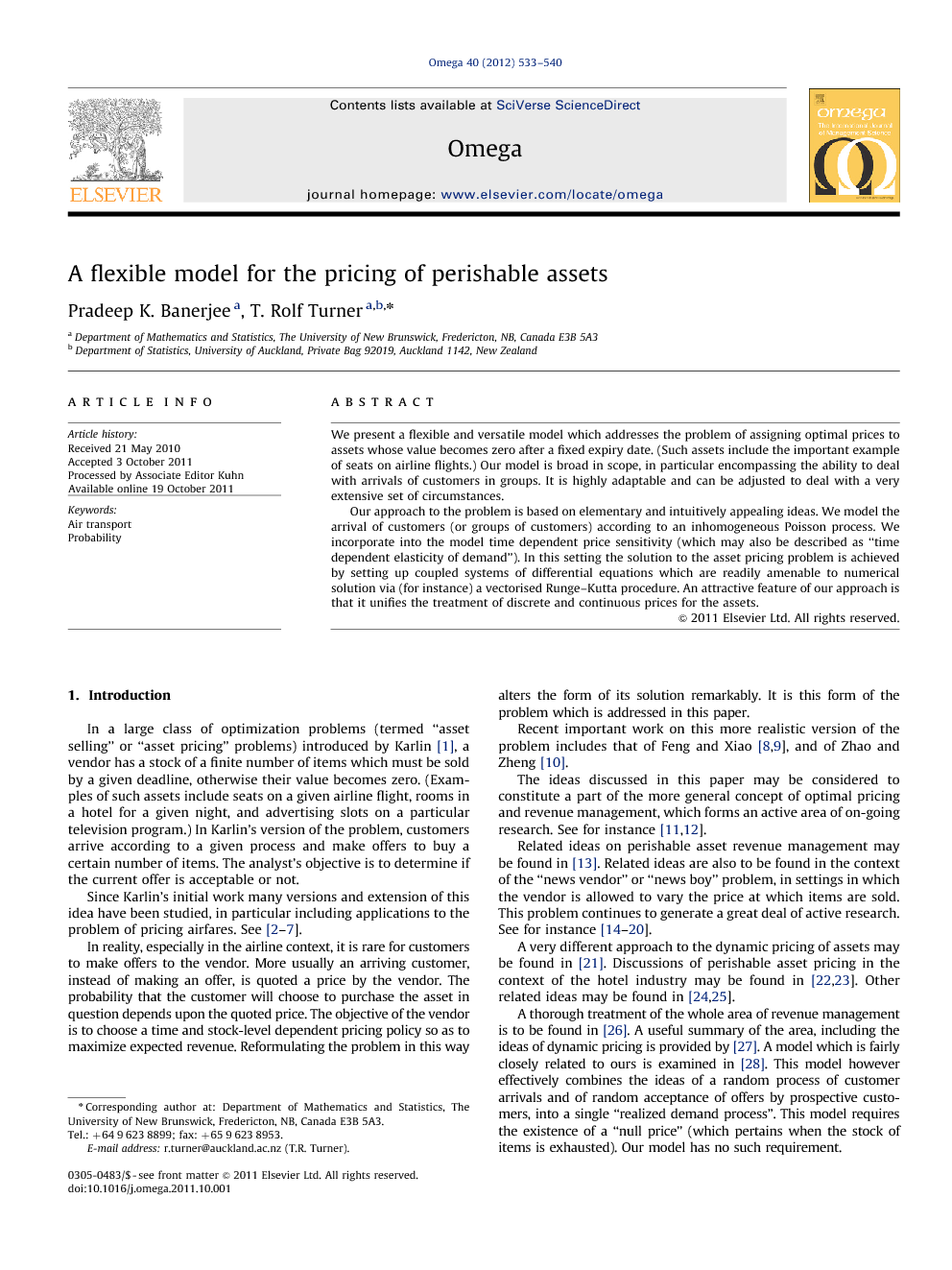 We present a flexible and versatile model which addresses the problem of assigning optimal prices to assets whose value becomes zero after a fixed expiry date. (Such assets include the important example of seats on airline flights.) Our model is broad in scope, in particular encompassing the ability to deal with arrivals of customers in groups. It is highly adaptable and can be adjusted to deal with a very extensive set of circumstances. Our approach to the problem is based on elementary and intuitively appealing ideas. We model the arrival of customers (or groups of customers) according to an inhomogeneous Poisson process. We incorporate into the model time dependent price sensitivity (which may also be described as “time dependent elasticity of demand”). In this setting the solution to the asset pricing problem is achieved by setting up coupled systems of differential equations which are readily amenable to numerical solution via (for instance) a vectorised Runge–Kutta procedure. An attractive feature of our approach is that it unifies the treatment of discrete and continuous prices for the assets.

In a large class of optimization problems (termed “asset selling” or “asset pricing” problems) introduced by Karlin [1], a vendor has a stock of a finite number of items which must be sold by a given deadline, otherwise their value becomes zero. (Examples of such assets include seats on a given airline flight, rooms in a hotel for a given night, and advertising slots on a particular television program.) In Karlin's version of the problem, customers arrive according to a given process and make offers to buy a certain number of items. The analyst's objective is to determine if the current offer is acceptable or not. Since Karlin's initial work many versions and extension of this idea have been studied, in particular including applications to the problem of pricing airfares. See [2], [3], [4], [5], [6] and [7]. In reality, especially in the airline context, it is rare for customers to make offers to the vendor. More usually an arriving customer, instead of making an offer, is quoted a price by the vendor. The probability that the customer will choose to purchase the asset in question depends upon the quoted price. The objective of the vendor is to choose a time and stock-level dependent pricing policy so as to maximize expected revenue. Reformulating the problem in this way alters the form of its solution remarkably. It is this form of the problem which is addressed in this paper. Recent important work on this more realistic version of the problem includes that of Feng and Xiao [8] and [9], and of Zhao and Zheng [10]. The ideas discussed in this paper may be considered to constitute a part of the more general concept of optimal pricing and revenue management, which forms an active area of on-going research. See for instance [11] and [12]. Related ideas on perishable asset revenue management may be found in [13]. Related ideas are also to be found in the context of the “news vendor” or “news boy” problem, in settings in which the vendor is allowed to vary the price at which items are sold. This problem continues to generate a great deal of active research. See for instance [14], [15], [16], [17], [18], [19] and [20]. A very different approach to the dynamic pricing of assets may be found in [21]. Discussions of perishable asset pricing in the context of the hotel industry may be found in [22] and [23]. Other related ideas may be found in [24] and [25]. A thorough treatment of the whole area of revenue management is to be found in [26]. A useful summary of the area, including the ideas of dynamic pricing is provided by [27]. A model which is fairly closely related to ours is examined in [28]. This model however effectively combines the ideas of a random process of customer arrivals and of random acceptance of offers by prospective customers, into a single “realized demand process”. This model requires the existence of a “null price” (which pertains when the stock of items is exhausted). Our model has no such requirement. Our model is expressed in terms of individual rather than aggregate demand. This and the fact that we decouple customer arrivals and the acceptance process, making the latter random, avoid the difficulty of dealing with the distinction between “myopic” and “strategic” customers (see [26, p. 182]). In our treatment this distinction is subsumed in the randomness of a customer's accepting a given offer. This seems reasonable: the nature of a customer (myopic or strategic) is unpredictable and hence random from the point of view of the vendor. None of the existing literature, as far as we have been able to discover, deals with the issue of customers arriving in groups. Our model is capable of handling this phenomenon.

We have derived a solvable system of differential equations for the optimal prices of perishable assets in a very broad setting. Our solution permits customers to arrive in groups rather than singly. The versatile solution system that we have developed permits experimentation with a variety of scenarios. Such experimentation reveals that the price structure obtained by assuming that customers arrive singly is substantially different from that in the setting in which they are assumed to arrive in groups. The impact of group arrivals on the expected values of stocks is substantial, these values being a great deal lower in the group arrival setting than they are in the single arrival setting. The impact of variable arrival intensity is also striking. In our example, where the probability of accepting an offer at a given price decreases with residual time, the expected values of stocks (for a fixed expected total number of arrivals) are much higher when the arrival intensity increases as the residual time tends to zero. The impact of using the optimal pricing policy appears to be quite large. In the simple example that we investigated, the use of the optimal pricing policy led to an increase of 41% in the expected value of the initial stock, when compared with the expected value obtained under a sub-optimal pricing policy obtained from a “reasonably comparable” set of assumptions.