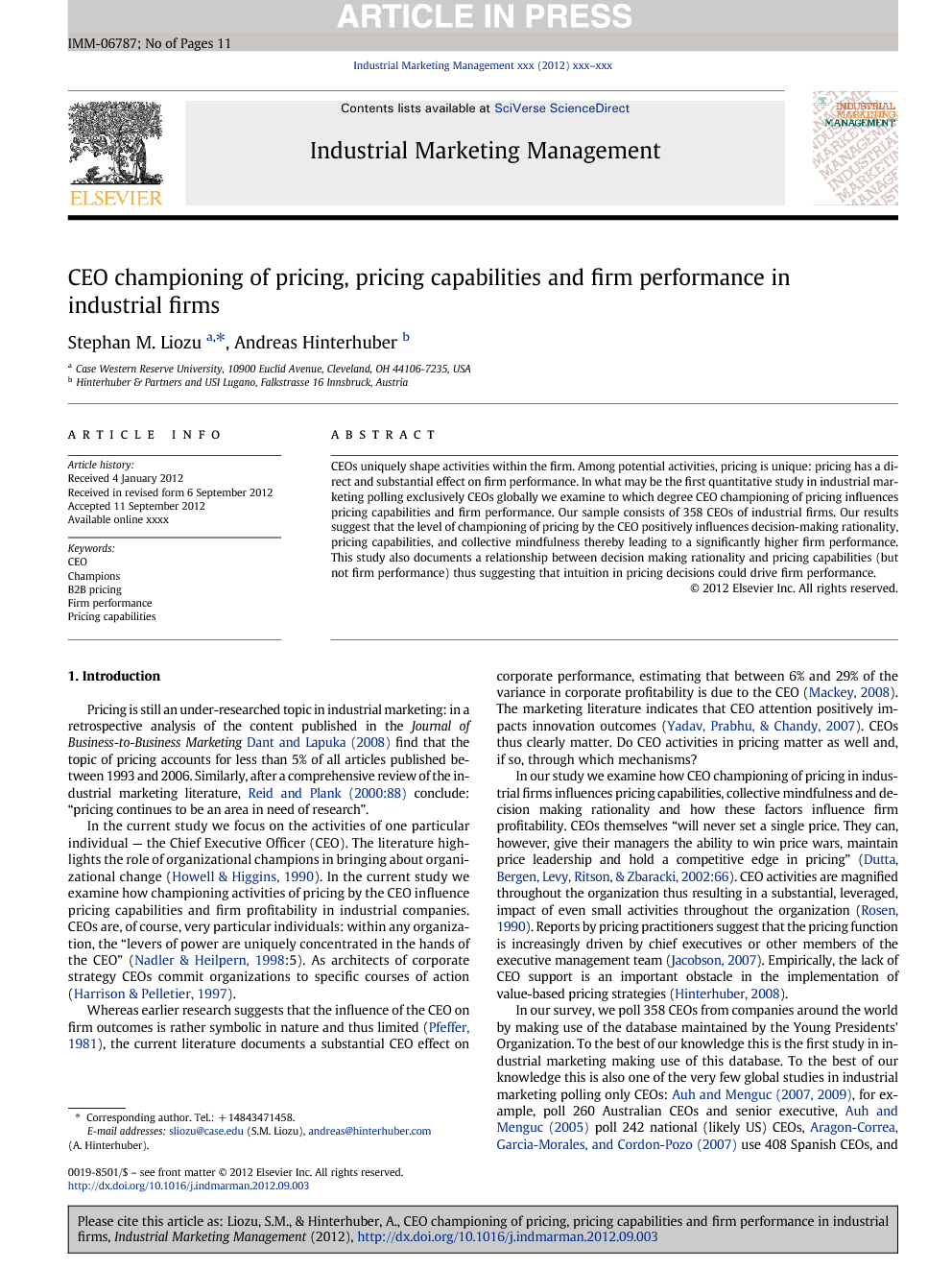 Pricing is still an under-researched topic in industrial marketing: in a retrospective analysis of the content published in the Journal of Business-to-Business MarketingDant and Lapuka (2008) find that the topic of pricing accounts for less than 5% of all articles published between 1993 and 2006. Similarly, after a comprehensive review of the industrial marketing literature, Reid and Plank (2000:88) conclude: “pricing continues to be an area in need of research”. In the current study we focus on the activities of one particular individual — the Chief Executive Officer (CEO). The literature highlights the role of organizational champions in bringing about organizational change (Howell & Higgins, 1990). In the current study we examine how championing activities of pricing by the CEO influence pricing capabilities and firm profitability in industrial companies. CEOs are, of course, very particular individuals: within any organization, the “levers of power are uniquely concentrated in the hands of the CEO” (Nadler & Heilpern, 1998:5). As architects of corporate strategy CEOs commit organizations to specific courses of action (Harrison & Pelletier, 1997). Whereas earlier research suggests that the influence of the CEO on firm outcomes is rather symbolic in nature and thus limited (Pfeffer, 1981), the current literature documents a substantial CEO effect on corporate performance, estimating that between 6% and 29% of the variance in corporate profitability is due to the CEO (Mackey, 2008). The marketing literature indicates that CEO attention positively impacts innovation outcomes (Yadav, Prabhu, & Chandy, 2007). CEOs thus clearly matter. Do CEO activities in pricing matter as well and, if so, through which mechanisms? In our study we examine how CEO championing of pricing in industrial firms influences pricing capabilities, collective mindfulness and decision making rationality and how these factors influence firm profitability. CEOs themselves “will never set a single price. They can, however, give their managers the ability to win price wars, maintain price leadership and hold a competitive edge in pricing” (Dutta, Bergen, Levy, Ritson, & Zbaracki, 2002:66). CEO activities are magnified throughout the organization thus resulting in a substantial, leveraged, impact of even small activities throughout the organization (Rosen, 1990). Reports by pricing practitioners suggest that the pricing function is increasingly driven by chief executives or other members of the executive management team (Jacobson, 2007). Empirically, the lack of CEO support is an important obstacle in the implementation of value-based pricing strategies (Hinterhuber, 2008). In our survey, we poll 358 CEOs from companies around the world by making use of the database maintained by the Young Presidents' Organization. To the best of our knowledge this is the first study in industrial marketing making use of this database. To the best of our knowledge this is also one of the very few global studies in industrial marketing polling only CEOs: Auh and Menguc, 2007 and Auh and Menguc, 2009, for example, poll 260 Australian CEOs and senior executive, Auh and Menguc (2005) poll 242 national (likely US) CEOs, Aragon-Correa, Garcia-Morales, and Cordon-Pozo (2007) use 408 Spanish CEOs, and Sluyts, Matthyssens, Martens, and Streukens (2011) use 235 Belgian CEOs. Other studies have a large share (60%) of CEOs among respondents, but also use operating managers (Land, Engelen, & Brettel, 2012). Finally, qualitative research with the CEO as main respondent is quite frequent (Keating and McLoughlin, 2010 and Zerbini et al., 2007). In other words, quantitative, global surveys with the CEO as respondent are not very frequent in industrial marketing, but potentially very illuminating given the uniqueness of the position of a CEO within any organization. Understanding the link between CEO commitment to and involvement in pricing and the design and performance of an organization allows us to further shed light on a specific type of strategic action – championing of the pricing function – through which CEOs can influence firm performance. Our inquiry contributes to the fields of pricing and industrial marketing by linking CEO championing behaviors to three organizational factors – pricing capabilities, collective mindfulness and decision making rationality – and subsequently to relative firm performance. Most importantly, our data highlight the role of organizational champions and imply that purposeful championing of pricing by CEOs influences organizational design for pricing and firm performance. Our results also underline the role of decision making rationality in building pricing capabilities. Contrary to expectations, we do not find an effect of decision making rationality on firm performance. For future research this potentially suggests that, conversely, intuition in pricing decision could positively affect firm performance.

Strategy is “the pattern of activities determinant of the gain in a context of market exchange” (Snehota, 1990:164). In this study we examine the impact of one particular type of strategic activity – CEO championing activities of pricing – on firm performance. We focus on pricing activities since pricing is a frequently overlooked area in industrial marketing (Lancioni, 2005). Lancioni et al. (2005) identify senior management as the organizational layer presenting the largest number of obstacles to price setting and price planning in industrial firms. This study, conversely, takes a complementary perspective in examining to which extent (active) CEO championing behaviors influence pricing capabilities and firm profitability in industrial companies. Our findings offer four substantive contributions. First, our results support the proposition that a purposeful championing of pricing activities by top executives strongly influences the organizational design to support the pricing process: CEO championing positively and significantly influences pricing capabilities, decision-making rationality, and collective mindfulness. By providing evidence of these relationships, we uniquely begin the exploration of organizational drivers of the pricing function. Our conclusions suggest that, once top executives realize the importance of pricing and purposefully decide to champion it, the impact on the organization and its performance is significant. In line with previous studies (Mackey, 2008) we find that CEOs clearly matter and provide support for studies in business markets on the role of senior management in designing and implementing pricing strategies (Lancioni et al., 2005). Second, our results support resource-based theory that pricing capabilities positively and significantly influence firm performance vis-à-vis competition. Previous studies on marketing capabilities suggest a positive link between pricing capabilities – a subset of marketing capabilities – and firm performance (Morgan et al., 2009 and Vorhies and Morgan, 2005). However, these studies measure pricing capabilities as part of a much wider subset of marketing capabilities using a narrow, 3-item scale: We develop a new 12-item scale for pricing capabilities to reflect the complex processes and organizational routines which pricing capabilities encompass (Dutta et al., 2003). Our findings show that pricing capabilities are significantly influenced by championing behaviors, decision-making rationality, mindfulness and overall pricing orientation. In turn, these capabilities in pricing positively influence firm performance vis-à-vis competition in industrial companies. Third, our findings suggest that the CEO is essential for the successful implementation of pricing in industrial firms. Pricing should become a top priority for CEOs. By investing to build pricing capabilities that generate a sustainable and inimitable competitive advantage, champions of pricing forge shared vision, a collective can-do mentality and a sense of resilience in the firm that lead to superior levels of organizational efficacy (Bohn, 2001) and superior outcome. Dutta et al. (2002:66) state that “most CEOs will never set a single price. They can, however, give their managers the ability to win price wars, maintain price leadership and hold a competitive edge in pricing.” Finally, this study finds a positive relationship between decision making rationality and pricing capabilities, but – contrary to expectations – does not find a relationship between decision making rationality and firm performance. Decision making rationality thus contributes to the development of pricing capabilities within firms, but not to firm performance. The absence of a relationship between decision making rationality and firm performance points, at least in principle, towards the role of intuition. The role of intuition in decision-making theory is gaining interest as of recent (Sadler-Smith & Shefy, 2004). Intuitive decision making is increasingly viewed as a viable and acceptable approach in today's business context (Burke & Miller, 1999). Intuition may be an appropriate decision-making process in certain situations and business scenarios, especially in situations of uncertainty, turbulence (Khatri & Ng, 2000), or novelty. Scholars relate the intuitive skills of managers to the intuitive skills of chess masters or physicians (Simon, 1987). Experienced managers have in memory a large amount of experience, schemas and patterns gained through experience and organized “in terms of recognizable chunks and associated information” (Simon, 1987:61). Managers need to be able to combine both approaches to reach a greater level of decision effectiveness (Dane and Pratt, 2007 and Simon, 1987). Intuition can then become a complement to an appropriate pricing decision after a thorough analytical and scientific process. An interesting avenue for future research is thus the exploration of contingencies which favor decision making rationality versus intuition in industrial pricing. An exploration of the consequences of intuitive decision making in industrial pricing is warranted.