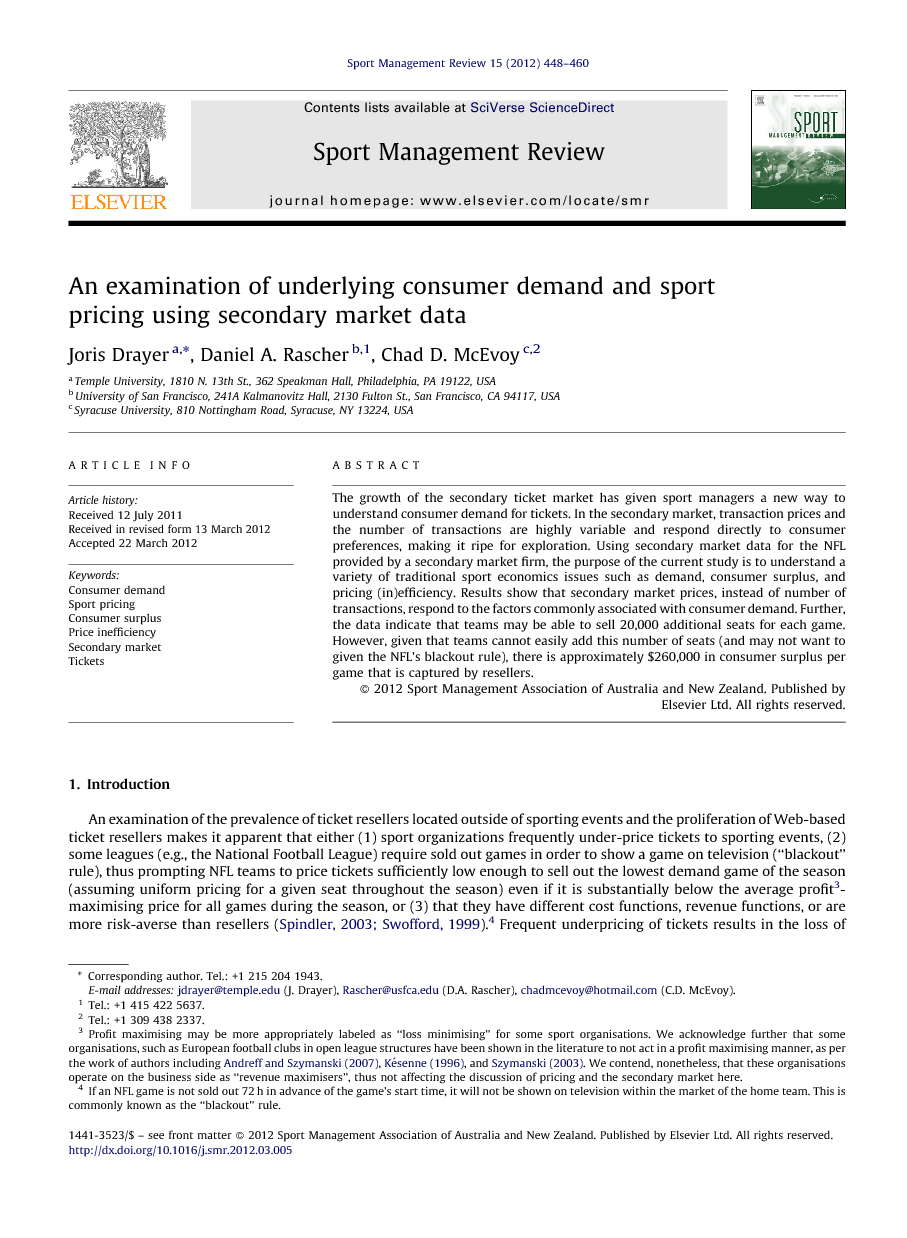 The growth of the secondary ticket market has given sport managers a new way to understand consumer demand for tickets. In the secondary market, transaction prices and the number of transactions are highly variable and respond directly to consumer preferences, making it ripe for exploration. Using secondary market data for the NFL provided by a secondary market firm, the purpose of the current study is to understand a variety of traditional sport economics issues such as demand, consumer surplus, and pricing (in)efficiency. Results show that secondary market prices, instead of number of transactions, respond to the factors commonly associated with consumer demand. Further, the data indicate that teams may be able to sell 20,000 additional seats for each game. However, given that teams cannot easily add this number of seats (and may not want to given the NFL's blackout rule), there is approximately $260,000 in consumer surplus per game that is captured by resellers.

An examination of the prevalence of ticket resellers located outside of sporting events and the proliferation of Web-based ticket resellers makes it apparent that either (1) sport organizations frequently under-price tickets to sporting events, (2) some leagues (e.g., the National Football League) require sold out games in order to show a game on television (“blackout” rule), thus prompting NFL teams to price tickets sufficiently low enough to sell out the lowest demand game of the season (assuming uniform pricing for a given seat throughout the season) even if it is substantially below the average profit3-maximising price for all games during the season, or (3) that they have different cost functions, revenue functions, or are more risk-averse than resellers (Spindler, 2003 and Swofford, 1999).4 Frequent underpricing of tickets results in the loss of thousands, if not millions, of dollars of ticket revenue that could have been realized by the sport organization and is instead captured by the secondary ticket market, which includes all ticket holders who resell their tickets (professional “brokers” as well as casual fans who simply choose not to attend) (Drayer & Shapiro, 2009). In the NFL, however, the apparent underpricing might be efficient in reacting to the “blackout” rule or differences in cost functions, revenue functions, or risk preferences from resellers. Moreover, it does appear that NFL teams are inefficient in one sense given the recent proliferation and acceptance of variable ticket pricing (VTP) and dynamic ticket pricing (DTP) in other sports. A team could charge different prices for each home game recognizing that it could still sell out with higher prices to some premium games. As long as primary market prices remain inefficient, sellers in the secondary market will continue to profit from games with increased demand. A SportsBusiness Journal roundtable discussion highlighted the importance of this issue to sport organizations. Sam Kennedy, Executive Vice President and Chief Sales and Marketing Officer for the Boston Red Sox, stated: After figuring out digital media, dealing with secondary ticketing is our most critical issue, and the biggest issue facing teams in all sports. We are just blown away by what the secondary market can get for our tickets. We brought in Harvard Business School. They did a regression analysis and showed us where we are leaving tens of millions of dollars on the table every year, and the secondary market is the beneficiary of that (“How Goes Sports?,” 2008, p. 20). Sal Galatioto, Founder and Chairman of Galatioto Sports Partners, responded similarly: We’ve done work with both the Jets and Giants, and you’d be amazed how many of those longtime ticket-holders go to a few games and then sell their other games for an enormous profit. That money belongs to the team owners, doesn’t it? The transfer of that wealth away from the people creating it to the middlemen who do nothing is huge (p. 20). The secondary market has traditionally been controlled by local ticket brokers and resellers, often called scalpers. However, Internet sites such as StubHub, RazorGator, and eBay have all made the exchange of tickets in the secondary market both more legitimate as well as more efficient (Drayer & Martin, 2010). Arthur Fogel, producer of U2's Vertigo tour, said that “the Internet has created the potential for everybody to be a scalper” (Waddell, 2005, p. 24). This increased efficiency has grown the secondary market into a multi-billion dollar industry (Belson, 2011, De Atley, 2004, Fisher, 2005, Lacy, 2005 and Stecklow, 2006). As a result, sport organizations in the primary market have developed several strategies designed to regain revenue that they feel they are entitled to. These strategies include VTP, DTP, as well as formalized secondary market partnerships with companies such as StubHub or Ticketmaster. In some cases, especially at international mega-events such as the FIFA World Cup or the Olympic Games, the reselling of tickets is illegal. Yet secondary markets do seem to exist anyway because of the economic forces and deep underpricing for certain games/events. Each of these strategies has been implemented in direct response to the growth of the secondary market and the realization the pricing strategies in the primary market appear to be suboptimal. In the NFL (which is under examination in the current paper), in particular, quantity demanded for events appears to be high as indicated by the frequency of sellouts; however, the league and its member teams have not adopted any game-by-game price changes in response to fluctuations in demand. Subsequently, the secondary market for these tickets has become incredibly vibrant which allows teams to gain valuable information about the demand for their tickets (Drayer, Stotlar, & Irwin, 2008). Therefore, the present study seeks to understand a variety of traditional economics issues related to the secondary ticket market, its effects on prices, quantities, consumer surplus, welfare, and excess demand, and is guided by the following research questions. 1. What factors are important in predicting the secondary market price for NFL games? 2. What factors are important in predicting the secondary market demand/quantity of transactions for NFL games? 3. How much do NFL consumers benefit by being able to purchase NFL tickets in the primary market for a price that is less than they would be willing to pay (i.e., consumer surplus)? 4. What is the excess demand for NFL games captured by the secondary market? The remainder of this article describes the literature related to each of the aforementioned research questions, the theoretical framework for secondary ticketing, the data and methods used to address the research questions, results of each research question, and a discussion of the results, implications, and future research.

Academic studies that attempt to estimate consumer demand therefore use quantity sold as the dependent variable. Within sport, the demand literature is fairly consistent with regard to the important variables in estimating consumer demand. By extension, you may assume that the number of secondary market transactions may be a useful measure of demand as it can vary substantially from game to game. However, our data is somewhat inconclusive in this regard, meaning that, in this market, quantity sold may not be an accurate measure of demand. In the current study, the significant variables when secondary market price is used as the dependent variable (team performance, outcome uncertainty, new stadium, etc.…) are mostly consistent with the existing sport consumer demand research. Put another way, in the primary market, attendance data reflects the attractiveness of the game, because listed ticket prices typically do not fluctuate throughout the season to adjust to changes in demand, while in the secondary market, price reflects the attractiveness of the game. There are several potential explanations for this phenomenon. First, while supply is fixed in the primary market, it can potentially fluctuate quite drastically in the secondary market. Clearly, the impact of supply on price and the number of transactions is highly significant in this, and any other, market. Considering the vast number of secondary market platforms available, knowing how many tickets are available at a given time in the secondary market is a near impossible task. The recent circumstance involving brokers’ inability to satisfy the flurry of orders for tickets to the college football championship game on StubHub (Rovell, 2011) indicates that listed tickets may not even represent actual tickets but represent the recent trend of short selling in the secondary market, which further aggravates the difficulty in measuring secondary market supply. An additional explanation for this phenomenon includes an understanding of seller motivations. The vast majority of secondary market websites allow anyone to post tickets for sale. Broadly speaking, these sellers can be broken up into two categories: fans and brokers. Both groups have a different response when demand goes up. In this circumstance, a fan is perhaps more likely to want to attend that event and not resell, for all the reasons that explain increases in consumer demand such as team performance, rivalry games, and demand uncertainty, while a broker is incentivized to buy and resell as many tickets as possible, particularly when prices are high. In the NFL, brokers may also be season ticket holders. For brokers in this category, they are selling the same number of season tickets for each of a single team's home games regardless of price and/or demand. Similarly, it is interesting to note that in the secondary market for NFL tickets, the transaction price model has a much higher goodness-of-fit than the transaction quantity model. While conclusions cannot be drawn when comparing econometric models with different dependent variables, a similar set of demand factors are used and a key difference is that in the price model the quality of the contest itself is much more prominent in driving secondary ticket prices than it is in driving the number of transactions. One possible explanation is that those who choose to resell their tickets for a given week instead of attending the game are likely not choosing so based on the vibrancy of the secondary market, but rather on other day-to-day scheduling conflicts, while purchasers are interested in attending an NFL game and purposefully chose an exciting game, thus driving up prices.