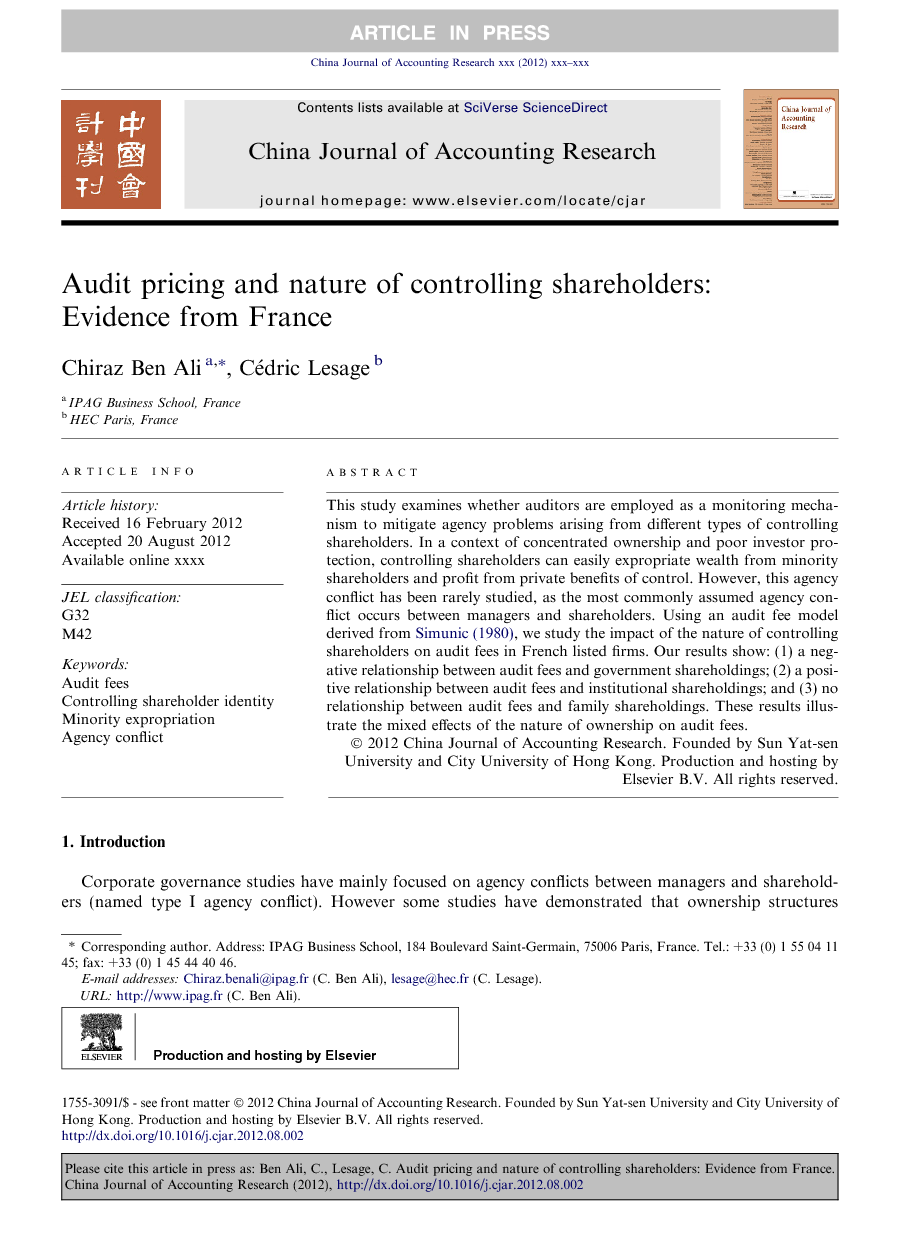 Corporate governance studies have mainly focused on agency conflicts between managers and shareholders (named type I agency conflict). However some studies have demonstrated that ownership structures around the world are more concentrated than previously assumed (Shleifer and Vishny, 1997, La Porta et al., 1999, Denis and McConnell, 2003 and Gillan and Starks, 2003). Weaker investor protection gives shareholders incentives to maintain large shareholdings to better control managers (Shleifer and Vishny, 1997). Consequently, in low investor protection countries, such as France, ownership is more concentrated, meaning the type I agency conflict between managers and shareholders is reduced, but agency conflicts between controlling shareholders and minority shareholders (called type II agency conflict) are higher (La Porta et al., 1999). In this paper, we investigate the influence of the nature of controlling shareholders on audit fees in France. The expropriation risk of minority shareholders is likely to influence the demand for audit services, which is usually measured by audit fees (Whisenant et al., 2003 and Hope et al., 2010). Namely, auditing is a monitoring cost that depends on the extent of agency conflicts, in the sense that auditors need to increase the scope of their audit for firms with high agency conflicts because of increased audit risk (inherent and/or audit risk) and auditor business risk (litigation risk) (Khalil et al., 2008). To our best knowledge, very few studies have investigated the type II agency conflict in relation to the audit fees, including Fan and Wong (2005) in East Asia and Khalil et al. (2008) in Canada. But France presents an interesting context for three main reasons: (1) it is a country which has been used as a typical representative of a weak investor protection country (La Porta et al., 1998 and Deminor, 2005); (2) listed firms have high ownership concentrations (La Porta et al., 1999 and Faccio and Lang, 2002); and (3) there are varying ownership structures as a large proportion of firms are controlled by the state or by families which actively participate in management (Djama and Boutant, 2006 and Trébucq, 2007). However the nature of controlling shareholders is likely to influence the risk of minority expropriation. For instance Villalonga and Amit (2006) assume that families have stronger incentives to expropriate wealth from minority shareholders than widely-held corporations because private benefits of control are not diluted among several independent owners. Several papers call for research (Hay et al., 2006) about the relationship between the nature of ownership and audit fees, especially in a European continental setting where ownership structures are not as homogeneous as in Anglo–Saxon countries (Niemi, 2005). We therefore investigate the influence of the identity of the controlling shareholder on audit fees using regression analysis of French non-financial listed firms during 2006–2008. Our results present new explanations for previous ambiguous results about the relationship between audit fees and controlling ownership (Niemi, 2005 and Hay et al., 2006). First, we show two opposite effects (alignment vs. entrenchment) depending on the nature of ownership (family, institutional, government), while most prior studies assimilate both effects by using the sum of blockholder ownership (Peel and Clatworthy, 2001, Fan and Wong, 2005 and Niemi, 2005). Then, while many previous studies assume that institutional investors play a monitoring role in the corporate governance of French listed firms (McConnell and Servaes, 1990 and Rajgopal and Venkatachalam, 1997), we find that institutional ownership increases audit fees. We also find a negative relationship between government ownership and audit fees, which demonstrates that state representatives play a monitoring role in the corporate governance of French listed firms, which reduces audit risk and audit fees. Finally, we find no significant relation between family ownership and audit fees which may be explained by the existence of two opposite effects (entrenchment vs. alignment): family firms face less severe type I agency conflict but more severe type II agency conflict. Therefore, audit fees level may depend on the trade-off between the two types of agency conflicts. We contribute to the existing literature in several ways. First, there is a lack of research on firm ownership as a determinant of audit fees, particularly on the identity of non-managerial controlling shareholders (Niemi, 2005 and Hay et al., 2006). Second, this study contributes to the research on corporate governance mechanisms and provides evidence of the monitoring role of bureaucrats in state controlled firms in order to avoid reputational loss. Lastly, this research confirms that institutional investors constrain management to provide assurance that financial information is of high quality via high audit quality. The paper is organized as follows. The next section (Section 2) provides the theoretical framework and Section 3 develops our hypotheses. Section 4 presents the research design and Section 5 provides the sample selection procedures and descriptive statistics. Regressions results are disclosed in Section 6. Finally, we discuss the results and conclude in Section 7.

The present study examines the empirical relationship between ownership type and audit fees. The basic premise is that the identity of controlling shareholders influences the risk of minority expropriation and the effectiveness of blockholders to monitor corporate affairs, particularly the financial reporting process. Globally speaking, our results provide differentiated evidence, instead of mixed results stated by previous literature (Hay et al., 2006), about the association between audit fees and ownership structure. Our study contributes to the literature in several ways. First, we progress the extant research on corporate governance mechanisms by examining the existence of type II agency conflicts in a civil law country (La Porta et al., 1998). We provide a new explanation about previous mixed results on the relationship between ownership concentration and audit fees by examining the identity of controlling shareholders. We find opposite results for institutional blockholder ownership and state blockholder ownership and audit fees. However, we find no evidence of a relationship between family ownership and audit fees. One possible explanation is the existence of a trade-off effect between the decrease in type I agency conflict for family controlled firms and the increase of type II agency conflict, which both influence the magnitude of audit fees. However, this study suffers from some limitations. First, our variables related to ownership are direct and not ultimate ownership. Second, following Fan and Wong (2005), we assume that controlling and management ownership are stable over the studied period. Despite these limitations, our study aims to improve our understanding of the complex relationships between audit fees and ownership structure, by studying non-managerial ownership (Niemi, 2005 and Hay et al., 2006). We aim to generalize these results in future research and examine other institutional contexts of investors’ protection.