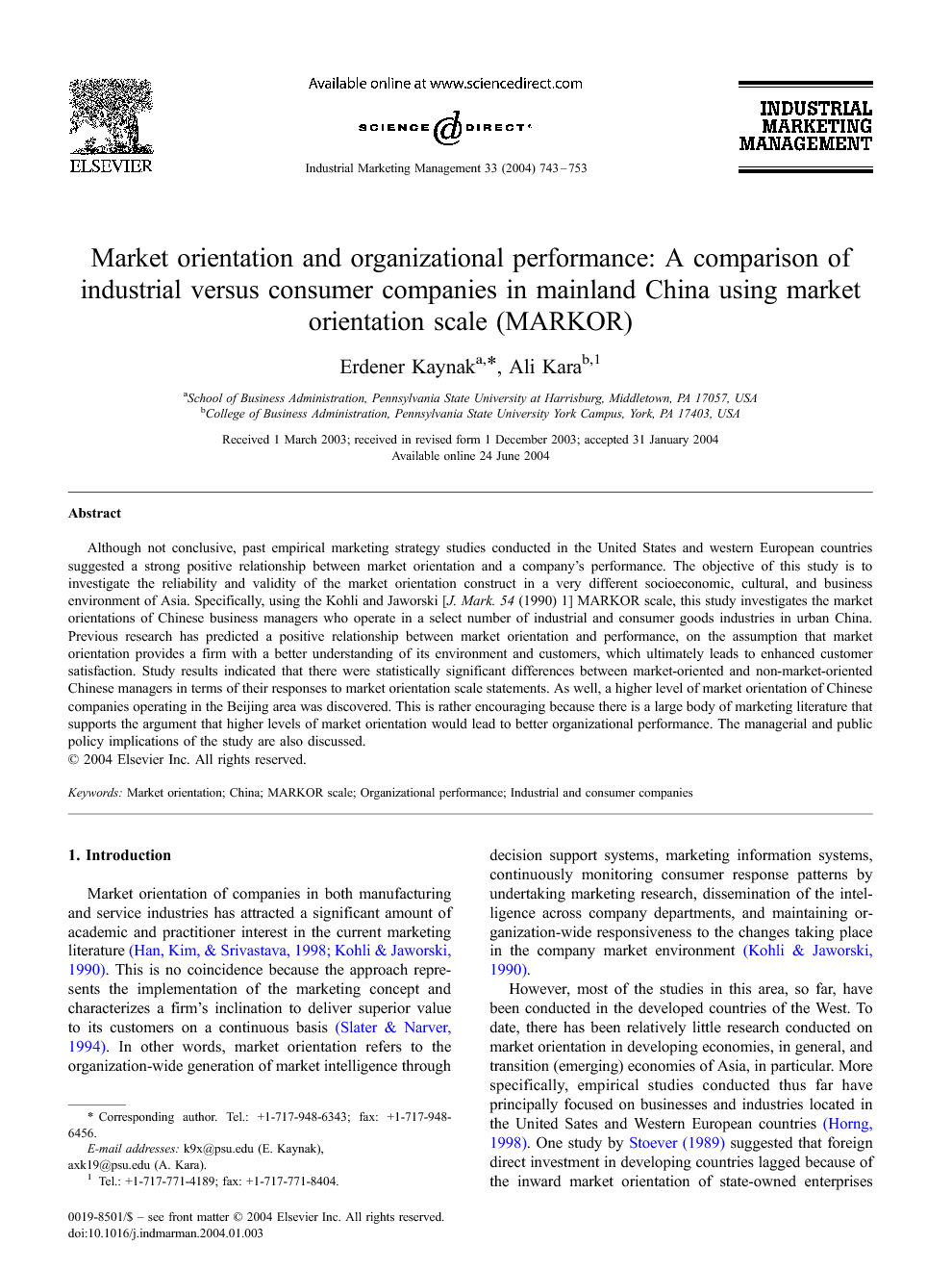 Although not conclusive, past empirical marketing strategy studies conducted in the United States and western European countries suggested a strong positive relationship between market orientation and a company's performance. The objective of this study is to investigate the reliability and validity of the market orientation construct in a very different socioeconomic, cultural, and business environment of Asia. Specifically, using the Kohli and Jaworski [J. Mark. 54 (1990) 1] MARKOR scale, this study investigates the market orientations of Chinese business managers who operate in a select number of industrial and consumer goods industries in urban China. Previous research has predicted a positive relationship between market orientation and performance, on the assumption that market orientation provides a firm with a better understanding of its environment and customers, which ultimately leads to enhanced customer satisfaction. Study results indicated that there were statistically significant differences between market-oriented and non-market-oriented Chinese managers in terms of their responses to market orientation scale statements. As well, a higher level of market orientation of Chinese companies operating in the Beijing area was discovered. This is rather encouraging because there is a large body of marketing literature that supports the argument that higher levels of market orientation would lead to better organizational performance. The managerial and public policy implications of the study are also discussed.

Market orientation of companies in both manufacturing and service industries has attracted a significant amount of academic and practitioner interest in the current marketing literature Han et al., 1998 and Kohli & Jaworski, 1990. This is no coincidence because the approach represents the implementation of the marketing concept and characterizes a firm's inclination to deliver superior value to its customers on a continuous basis (Slater & Narver, 1994). In other words, market orientation refers to the organization-wide generation of market intelligence through decision support systems, marketing information systems, continuously monitoring consumer response patterns by undertaking marketing research, dissemination of the intelligence across company departments, and maintaining organization-wide responsiveness to the changes taking place in the company market environment (Kohli & Jaworski, 1990). However, most of the studies in this area, so far, have been conducted in the developed countries of the West. To date, there has been relatively little research conducted on market orientation in developing economies, in general, and transition (emerging) economies of Asia, in particular. More specifically, empirical studies conducted thus far have principally focused on businesses and industries located in the United Sates and Western European countries (Horng, 1998). One study by Stoever (1989) suggested that foreign direct investment in developing countries lagged because of the inward market orientation of state-owned enterprises investment promotion materials. While this study presents a pessimistic point of view regarding market orientation, another study by Kaynak and Arbelaez (2000) provided a very positive perspective about market orientation in a Latin American developing country. This study surveyed Colombian managers and concluded that market trends are continuously changing in Colombia, and also indicated that marketing concept and market orientation pervaded the entire organization of the firms investigated. Although the marketing concept and market orientation have been highlighted in current business periodicals and academic literature for over four decades, businesses that function in global markets and want to become market oriented need to revise their outlook on the markets they serve and develop a different value system, vision, mission, or perspective of doing business. This issue becomes more important in transition economies, as these countries, in their attempt for economic development and transformation, try to improve not only their macro (at country or industry level) but also their micro (at individual company level) marketing system. As a result, it is valuable and essential that both academics and practitioners research the market orientation behavior of companies in transition economies. As globalization issues become essential to marketing practice, it is critical to consider whether (1) the existing market orientation scale items “make sense” in other cultures/nations and languages, (2) subsequent measure assessment would produce similar or comparable results (Kohli, Jaworski, & Kumar, 1993), and (3) comparability means that the results obtained in the United States by use of the scale items can be used to make valid comparisons between the countries covered by the research (Kumar, 1999). Past cross-cultural research literature offered us two approaches—emic and etic analysis. Emic attempts to study a culture from within by using its own system of norms, traditions, meanings, and value systems. On the other hand, etic analysis is a more detached perspective, which is more often used in comparative, cross-cultural/national studies. In global research, an etic scale would necessitate using the same set of scale items across all countries studied because it presupposes similarity across nations, which enhances the comparability among these nations. Whereas emic scale items would be tailored and/or adapted to a particular country cultural/national environment because cross-cultural/national differences are assumed (Keegan & Green, 2003, p. 243). The crucial question remains whether the construct developed in an advanced, developed country, such as the United State, is equally applicable in the different and turbulent environment of a developing, emerging economy (Hooly et al., 2000). Which items should remain the same and which ones need to be altered/modified, and which ones need to be dropped altogether? Researchers concluded that only a small number of market orientation studies have investigated the moderating effects of environmental variables on the relationship between market orientation and market performance (Gray, Matear, & Matheson, 1998). These studies concluded a stronger relationship between market orientation and performance in cases of technological and market turbulence Greenley, 1995 and Slater & Narver, 1994. The explanation for this stronger relationship appears to be that the managers operating in more turbulent markets become more sensitive to market changes and developments. It must be pointed out here that a strong growth market, such as the Chinese economy, shows a high degree of environmental turbulence with respect to fluctuating economic growth, company performance changes, unemployment, and inflation rates. There is also the emergence of burgeoning stronger consumer markets, particularly along the coastal cities of eastern China (Zeng & Williamson, 2003). The objective of the present study is to investigate the reliability and validity of the market orientation construct in the very different socioeconomic, cultural and business environment of Asia. Specifically, this study investigates the market orientation of Chinese business managers, who operate in a select number of industrial and consumer goods industries in urban China.

The research has demonstrated that the overall market orientation scale is a valid and reliable instrument of company market orientation in China. When presented with the scale, Chinese managers/executives had little difficulty in relating to these items. In addition, the discussions during the in-depth interview phase of the research suggested that the construct maintained its face validity. The reliability coefficients and the confirmatory factor analysis for the market orientation constructs indicate that the scale was adequate based on criterion used in the literature. An initial attempt was also made to examine the relationship between marketing orientation and organizational performances in a transition economy and provided empirical evidence to demonstrate the universal applicability of marketing in totally different settings. In this case, it is a low context culture. The analysis conducted in this study indicates that intelligence generation, dissemination, and responsiveness were the major factors that impacted a market orientation, which, in turn, impacts the organization's performance in a Chinese context. Based on the demographics of the sample, it is believed that a large proportion of the managers/executives that participated in the study had higher levels of market orientation. This finding is not surprising, as these companies are operating in a very competitive market environment, where they face stiff competition from both domestic and foreign companies. As well, most of these companies are serving the needs of sophisticated consumer and institutional markets. This finding of a higher level of market orientation of Chinese companies operating in the Beijing area is rather encouraging because there is a large body of marketing literature that supports the argument that higher levels of market orientation would lead to better organizational performance. The findings of this study indicate a higher market orientation among the industrial goods producers as opposed to the consumer goods producers. This might be due to the higher tendency to focus on intelligence generation and dissemination of the industrial goods producers. This might also be due to the fact that banking/financial services companies are included in the consumer goods producers, and our previous analyses indicated a tendency of low market orientation in this sector, which might have ultimately led to a lower market orientation for the whole group.