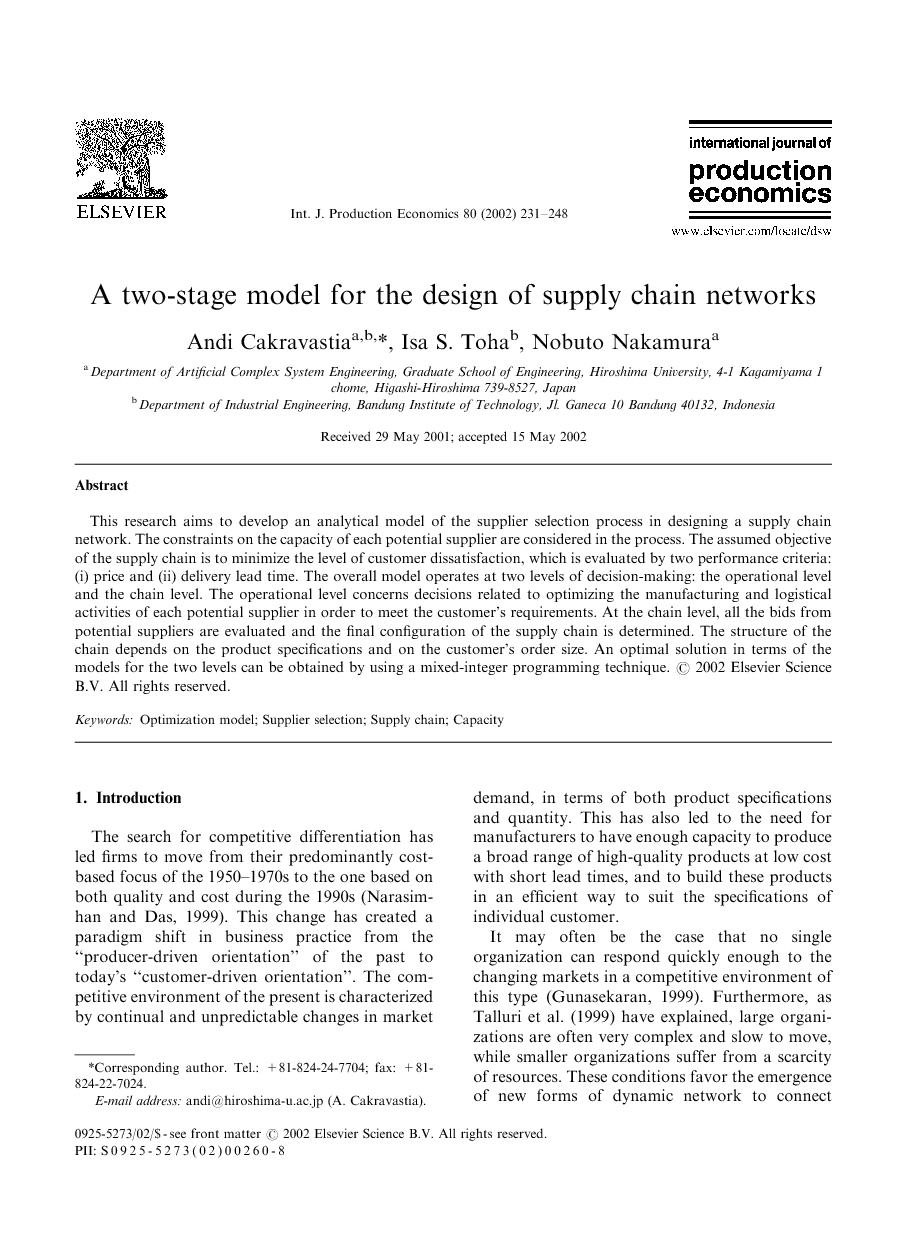 This research aims to develop an analytical model of the supplier selection process in designing a supply chain network. The constraints on the capacity of each potential supplier are considered in the process. The assumed objective of the supply chain is to minimize the level of customer dissatisfaction, which is evaluated by two performance criteria: (i) price and (ii) delivery lead time. The overall model operates at two levels of decision-making: the operational level and the chain level. The operational level concerns decisions related to optimizing the manufacturing and logistical activities of each potential supplier in order to meet the customer's requirements. At the chain level, all the bids from potential suppliers are evaluated and the final configuration of the supply chain is determined. The structure of the chain depends on the product specifications and on the customer's order size. An optimal solution in terms of the models for the two levels can be obtained by using a mixed-integer programming technique.

The search for competitive differentiation has led firms to move from their predominantly cost-based focus of the 1950–1970s to the one based on both quality and cost during the 1990s (Narasimhan and Das, 1999). This change has created a paradigm shift in business practice from the “producer-driven orientation” of the past to today's “customer-driven orientation”. The competitive environment of the present is characterized by continual and unpredictable changes in market demand, in terms of both product specifications and quantity. This has also led to the need for manufacturers to have enough capacity to produce a broad range of high-quality products at low cost with short lead times, and to build these products in an efficient way to suit the specifications of individual customer. It may often be the case that no single organization can respond quickly enough to the changing markets in a competitive environment of this type (Gunasekaran, 1999). Furthermore, as Talluri et al. (1999) have explained, large organizations are often very complex and slow to move, while smaller organizations suffer from a scarcity of resources. These conditions favor the emergence of new forms of dynamic network to connect manufacturers (D’Amours et al., 1996). Such a network develops on the basis of temporary alliances with other parties. These alliances are based on the core competencies of the various suppliers to create a supply chain that is highly responsive and flexible at responding to customer orders. To ensure such flexibility, the supply chain is considered to be temporary and its precise form is dependent on the demands of the market. By developing collaborations of this kind, manufacturers can increase their level of expertise and minimize the risk of investment (Samadhi and Hoang, 1998). One of the key issues in developing such a supply chain network is the selection of the suppliers. Sound selection is crucial since the performance of the chain depends on every single organization involved. Many factors are usually taken into account in the supplier selection process. Samadhi and Hoang (1998) have suggested a three-stage procedure for evaluating supplier compatibility, starting with abstract and strategic factors, moving through their attributes in terms of manufacturing, and ending with logistical factors. Talluri et al. (1999) have given a framework for the design of a design value chain network with a two-stage procedure that combines data envelopment analysis and goal-programming techniques. In other work, De Boer et al. (1998) have proposed the outranking methods to support the selection of suppliers. These methods are based on multi-criteria factors. In all of this research, by De Boer et al. (1998), Samadhi and Hoang (1998), and Talluri et al. (1999), the strongest emphasis is placed on the strategic factors that need to be considered in selecting suppliers. On the other hand, some efforts have been made to address operational factors. D’Amours et al. (1996) have developed a model for the price-based planning and scheduling of actions to do with multiple products to create a symbiotic manufacturing network. In that research, they assumed a set of bids from potential suppliers as given. The impact of information sharing on the development of networked manufacturing has been considered in subsequent work by D’Amours et al. (1999). Li and O’Brien (1999) have developed a two-stage model for the design of an efficient supply chain. It focuses on analyzing the impact of three possible manufacturing strategies, the make-to-order (MTO), make-from-stock (MFS), and make-to-stock (MTS) strategies. The research reported in this paper was developed based on the problem situation and model structure developed by Li and O’Brien (1999). However, their model does not consider constraints on each supplier's capacity, although capacity constraints are critical in responses to order inquiries (Hendry and Kingsman, 1994; Kingsman et al., 1996). They were addressed in the development of manufacturing networks by D’Amours et al (1996) and D’Amours et al (1999). In the present paper, we focus on capacity constraints in the design of a networked supply chain. In the model developed in this paper, the performance of the supply chain is analyzed at two levels of decision-making: (i) the chain level and (ii) the operational level. At the chain level, objectives associated with each criterion are set for each stage of the supply chain to ensure that the supply chain meets the customer's target. At the operational level, the manufacturing and logistical activities of each potential supplier are optimized in a way that matches the customer's target. The rest of this paper is organized as follows. Section 2 describes the decision structure and problem situation considered in this paper. Section 3 discusses the development of our models. Section 4 describes how we apply the two-level overall model and analyzes its behavior. Section 5 summarizes the main points and makes some concluding remarks about the limitations and future directions of this research.

We presented a two-level mathematical model for supplier selection in developing a supply chain network based on the work of Li and O’Brien (1999). The decision process of supply chain design was modeled in order to minimize the end customer’s level of dissatisfaction by making a tradeoff between price and delivery lead time. By considering capacity constraints we allowed potential suppliers to bid for part of the order quantity. For this situation, quantity-based measurement is more appropriate, since each supplier can bid for a different portion of the total order quantity. Based on the supply chain research taxonomy of Croom et al. (2000), the analysis in this paper was on the chain level, and limited to the consideration of the procurement part of the overall supply chain. In this paper, we assumed that there is a defined set of potential suppliers at each stage of the supply chain. Further discussion of the optimal method of defining a set of potential suppliers to be invited to take part in the bidding process can be found in De Boer and Telgen (2000). Our research is also concerned with the situation in which all parties in the supply chain are manufacturing companies. The manufacturer that made contact with the end customer plays the role of a network initiator, while the others provide support in terms of lower-stage product procurement. In the real world, as has been discussed by D’Amours et al. (1996), warehousing and transportation companies also play vital roles in determining the price and delivery lead time of a product, and thus need to be considered in the development of supply chain networks. We tried to validate the model by comparing its behaviors with the results of previous research. We found that the operational model has been able to generate the most efficient strategy in response to a customer inquiry and to produce general characteristics of the three basic manufacturing strategies MTO, MFS, and MTS. Subsequently, the chain-level model can produce the most efficient allocation of an order in creating a manufacturing network that minimizes the total dissatisfaction level. This research can be extended by overcoming the limitations of the model described above. In this paper, the manufacturer dominates the chain-level decision. One challenging area for further research is to consider the process of negotiation between the manufacturer and its potential suppliers when determining the order quantity, price, and due date for a lower-stage product.