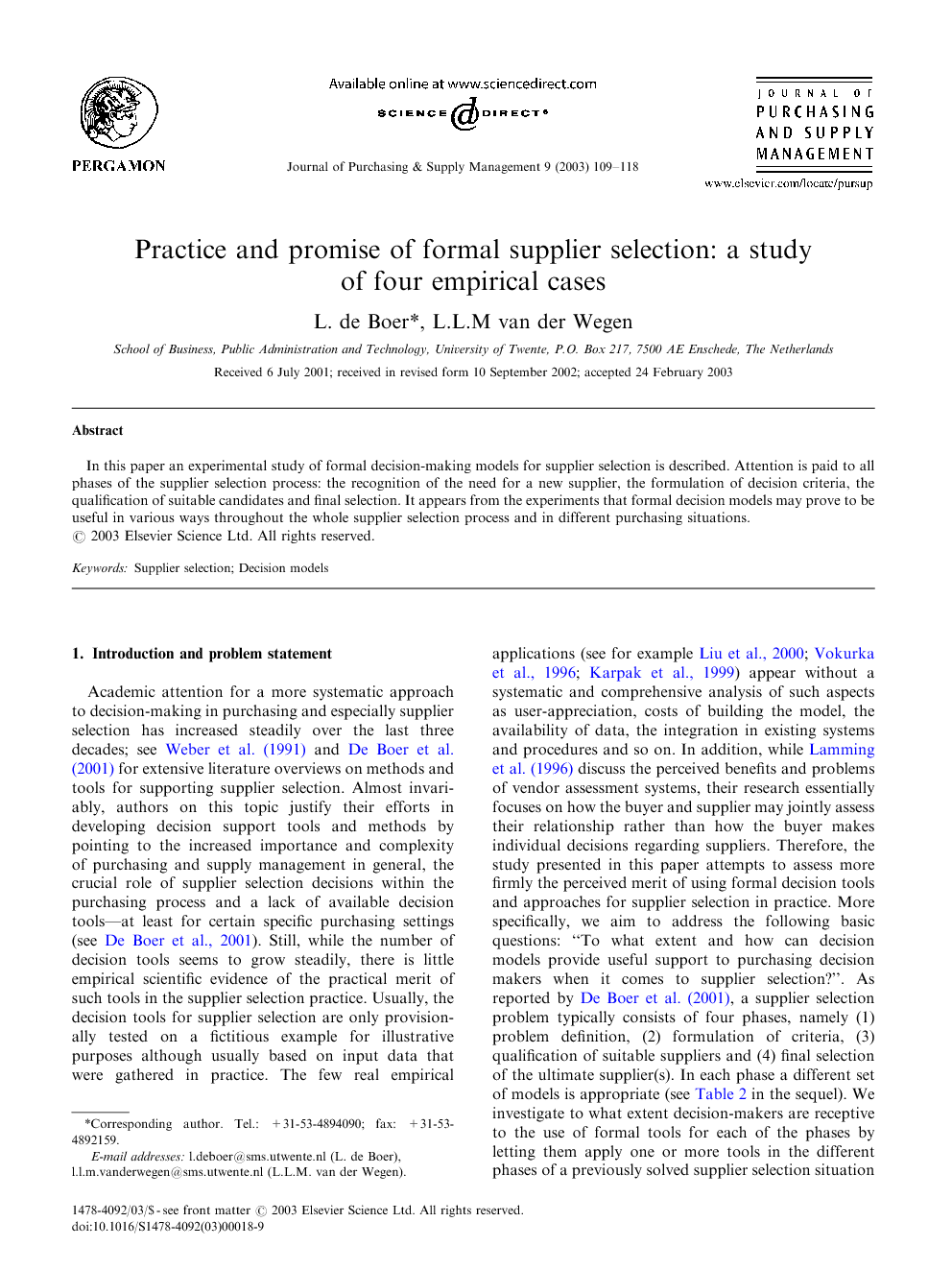 Based on the foregoing, the answer to our question “To what extent and how can decision models provide useful support to purchasers when it comes to supplier selection?” is twofold. First of all, in general the response resulting from the interviews can be described as ranging from neutral to positive with regard to the overall usefulness of decision models for supplier selection. This leads us to suggest that using decision models in supplier selection—provided that they are carefully selected and given certain conditions—may prove useful in various ways throughout the whole supplier selection process in fundamentally different purchasing situations. In our view, this underlines the usefulness and importance of research in this area. It also shows that the wide range of methods and techniques that has emerged during the past 50 or so years in Operations Research seems to provide the required variety of approaches required for coping with the diversity found in the purchasing practice. Furthermore, it implies the need for a shift in emphasis from developing decision models for the final selection phase to the earlier phases of problem definition and the formulation of criteria. Secondly, the analysis reveals the importance of considering the flexibility of a decision model in relation to the function of providing structure throughout the process. An extremely flexible decision model may limit the ‘structuring’ function. Depending on the respective importance of these two aspects for the decision-maker, different decision models—or ways of using them—may be considered. Also, the nature of the input information provided by the decision-makers requires specific attention. On the one hand, the acceptability of the outcome relies on using ‘unpolished’ personal judgements while objectivity of input information is important, as the subsequent aggregation mechanisms are not always clear to the users of the decision models. The results indicate the importance of a differentiated approach when applying decision models in supplier selection processes. For example, differences regarding the quantity and quality of available decision information and the financial impact of the supplier selection decision clearly require different types of decision models. This implies that in future research, the applicability of a novel decision model should be specified more clearly than has been the case so far. Finally, the analysis of the evaluation of the experiments suggests that organisation-wide implementation is not a straightforward matter. Clearly, most decision-makers need to be trained in order to be able to effectively use most of the decision models. Another challenge is to strike an appropriate balance between (a) the variety of decision models required to cope with the many different purchasing situations in terms of importance and complexity and (b) the overall cost of implementing and maintaining a set of decision models in an organisation which clearly will rise as the number of different decision models used in the firm increases. This points to two important and interrelated directions for further research on decision support for supplier selection. The first direction concerns the problem of trying to identify and develop and empirically investigate a number of small sets of different decision models per phase in the supplier selection process that may meet the challenge pointed out above. Secondly, this challenge also requires us to investigate the strong emergence of web-based provision of decision models and related know-how (see for example Geoffrion and Krishnan, 2001), which increasingly offers opportunities for buying decision support for supplier selection rather than developing all support in-house.