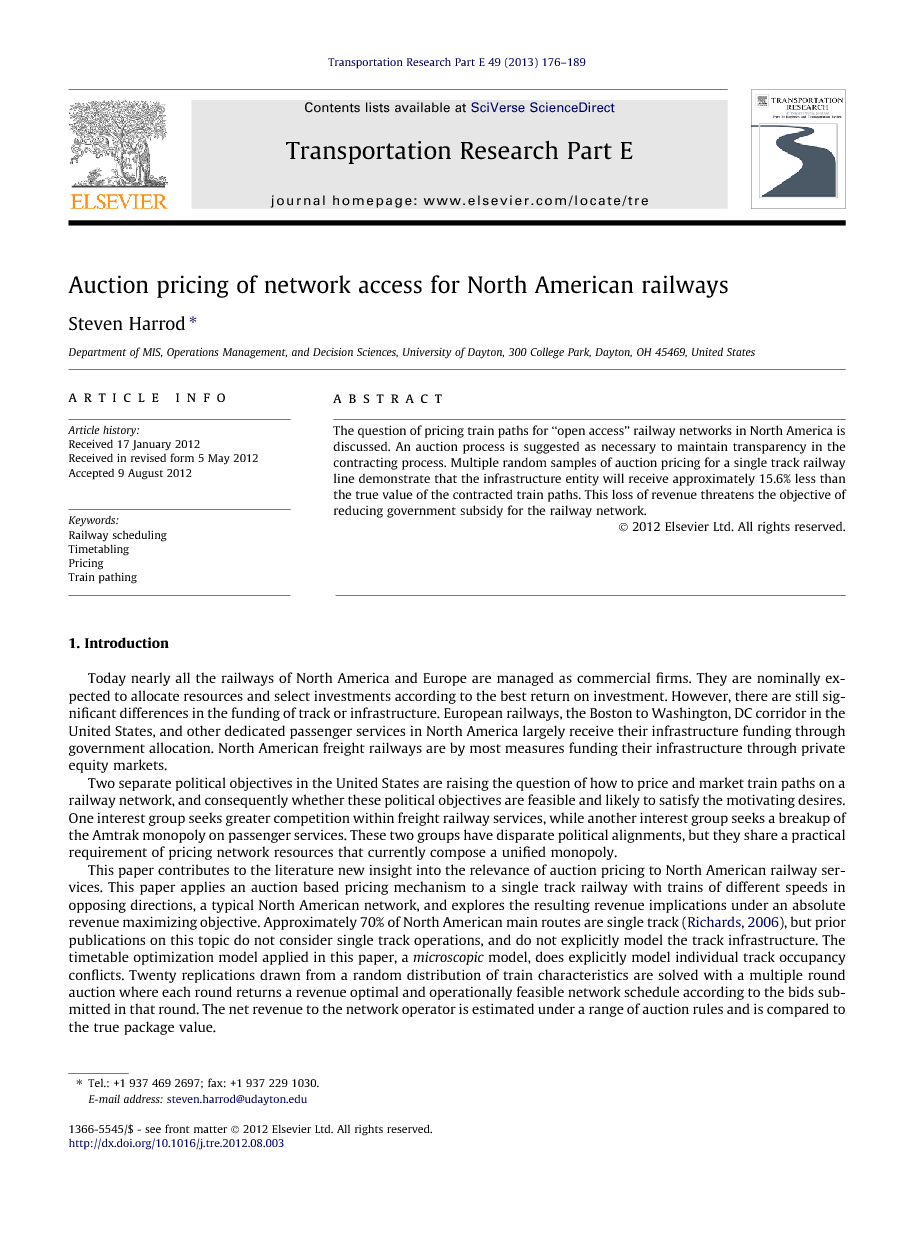 The question of pricing train paths for “open access” railway networks in North America is discussed. An auction process is suggested as necessary to maintain transparency in the contracting process. Multiple random samples of auction pricing for a single track railway line demonstrate that the infrastructure entity will receive approximately 15.6% less than the true value of the contracted train paths. This loss of revenue threatens the objective of reducing government subsidy for the railway network.

Today nearly all the railways of North America and Europe are managed as commercial firms. They are nominally expected to allocate resources and select investments according to the best return on investment. However, there are still significant differences in the funding of track or infrastructure. European railways, the Boston to Washington, DC corridor in the United States, and other dedicated passenger services in North America largely receive their infrastructure funding through government allocation. North American freight railways are by most measures funding their infrastructure through private equity markets. Two separate political objectives in the United States are raising the question of how to price and market train paths on a railway network, and consequently whether these political objectives are feasible and likely to satisfy the motivating desires. One interest group seeks greater competition within freight railway services, while another interest group seeks a breakup of the Amtrak monopoly on passenger services. These two groups have disparate political alignments, but they share a practical requirement of pricing network resources that currently compose a unified monopoly. This paper contributes to the literature new insight into the relevance of auction pricing to North American railway services. This paper applies an auction based pricing mechanism to a single track railway with trains of different speeds in opposing directions, a typical North American network, and explores the resulting revenue implications under an absolute revenue maximizing objective. Approximately 70% of North American main routes are single track (Richards, 2006), but prior publications on this topic do not consider single track operations, and do not explicitly model the track infrastructure. The timetable optimization model applied in this paper, a microscopic model, does explicitly model individual track occupancy conflicts. Twenty replications drawn from a random distribution of train characteristics are solved with a multiple round auction where each round returns a revenue optimal and operationally feasible network schedule according to the bids submitted in that round. The net revenue to the network operator is estimated under a range of auction rules and is compared to the true package value.

This paper is motivated by political objectives in North America which seek to simultaneously move railway operations from government to private operators, stimulate competition, and eliminate government subsidy. The most likely scheme, the most politically acceptable one, is a form of open access management similar to that implemented in Europe. The process for contracting access to the government owned railway network to private operators, the contracting of train paths, is likely to be contentious and subject to accusations of bias or incorrect selection. An auction process offers the benefit of an open, transparent process that can be numerically and objectively defended. In this paper a representative single track, North American line is scheduled with train paths drawn from a pool of competing bidders. An optimal timetable and selection of train paths is generated at each round after train path bid prices are revised. Twenty replications of the scheduling problem with mutually independent train speeds and utility values are evaluated. Bidders seeking train paths nearly exceed line capacity twofold, and the iterative auction process seeks the combination of winning bids that maximizes package revenue within the operating constraints of the network. The contributions of this paper to the literature are that, in contrast to prior work by Borndörfer et al., 2006 and Schlechte and Tanner, 2010, and others, this paper studies a single track line with bi-directional traffic, and the timetable optimization model in this paper is a microscopic model which specifically considers the physical limits of the track infrastructure. The net revenue to the network operator is estimated under a range of auction rules. Further, this paper compares the potential revenue from an auction allocation scheme to the revenue expected from either a vertically integrated organization or a private transaction organized along yield management principles. The best case auction method will result in approximately 15.6% less revenue that the true value of the train paths contracted. Assuming an auction method is the most politically acceptable method of contracting network access, an open access infrastructure operator would have less revenue to maintain the network than the same network under a vertically integrated firm. A vertically integrated firm would be able to realize and allocate the true value of the railway network to infrastructure investment. A separate infrastructure operator under an open access system with auction pricing would be transferring that additional value to the contracting operators. The only alternative suggested here, pure yield management, would not be politically acceptable because its pricing and contracting method would not be transparent. There is an inherent conflict in the political objectives described. The infrastructure operator will maximize revenue if it internalizes operations, if it operates as a vertically integrated transportation firm. An open access railway network will transfer or lose some value to the independent operators. Government subsidy may be necessary to replace this value, especially if profit margins are tight. On the other hand, maintaining a vertically integrated operator negates the objective for greater competition and entrepreneurial innovation. This paper sees no solution to this conflict in objectives. However, if an auction is desired yet, these results suggest that limiting the number of bid rounds will lead to higher prices and more revenue for the network. These results consistently show that allowing longer auctions with many bidding rounds only serves to help bidders minimize their bids, and thus return less revenue to the network operator. Ideally, these results argue for a limited number of bid cycles in which it would be expected that bidders would make offers closer to their maximum bid.