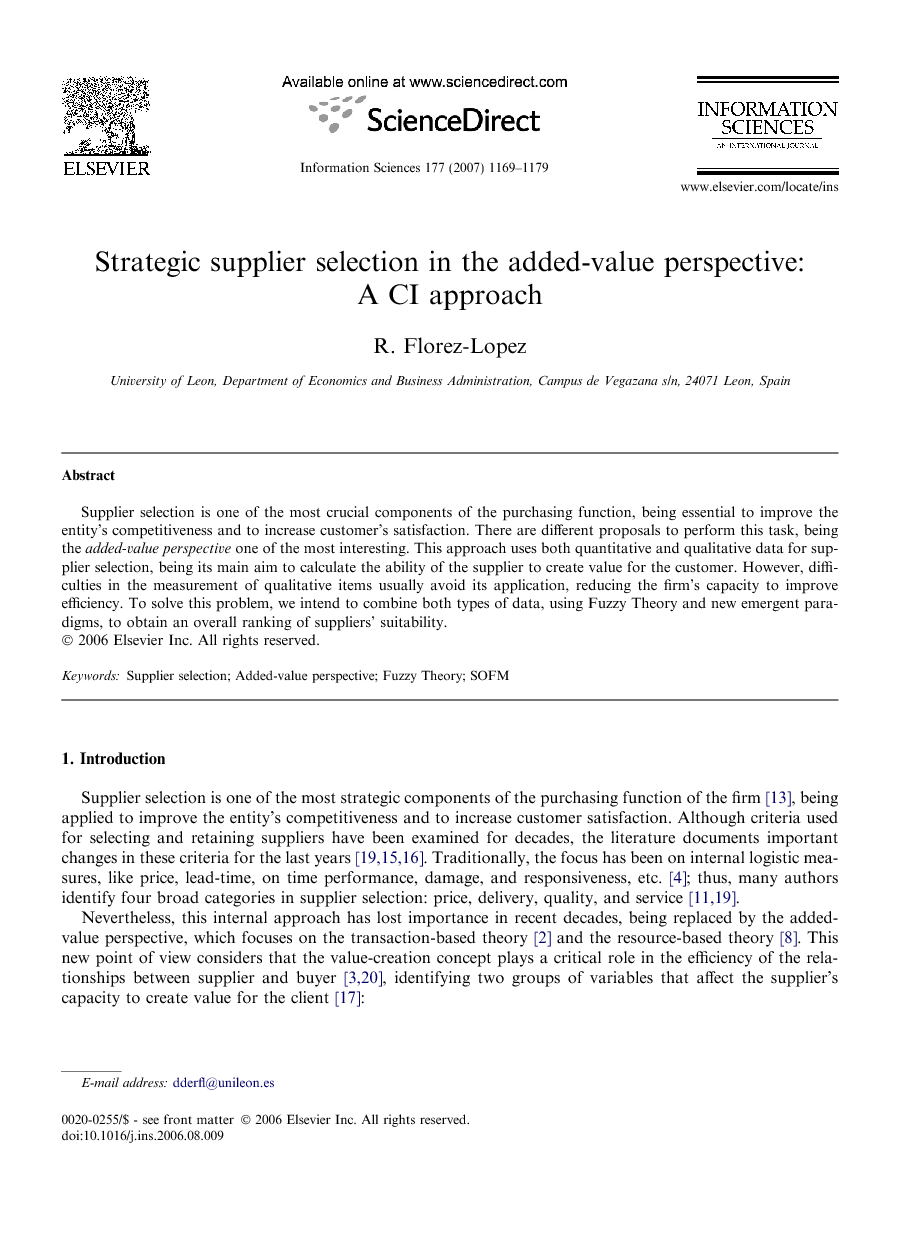 Supplier selection is one of the most crucial components of the purchasing function, being essential to improve the entity’s competitiveness and to increase customer’s satisfaction. There are different proposals to perform this task, being the added-value perspective one of the most interesting. This approach uses both quantitative and qualitative data for supplier selection, being its main aim to calculate the ability of the supplier to create value for the customer. However, difficulties in the measurement of qualitative items usually avoid its application, reducing the firm’s capacity to improve efficiency. To solve this problem, we intend to combine both types of data, using Fuzzy Theory and new emergent paradigms, to obtain an overall ranking of suppliers’ suitability.

Supplier selection is one of the most strategic components of the purchasing function of the firm [13], being applied to improve the entity’s competitiveness and to increase customer satisfaction. Although criteria used for selecting and retaining suppliers have been examined for decades, the literature documents important changes in these criteria for the last years [19], [15] and [16]. Traditionally, the focus has been on internal logistic measures, like price, lead-time, on time performance, damage, and responsiveness, etc. [4]; thus, many authors identify four broad categories in supplier selection: price, delivery, quality, and service [11] and [19]. Nevertheless, this internal approach has lost importance in recent decades, being replaced by the added-value perspective, which focuses on the transaction-based theory [2] and the resource-based theory [8]. This new point of view considers that the value-creation concept plays a critical role in the efficiency of the relationships between supplier and buyer [3] and [20], identifying two groups of variables that affect the supplier’s capacity to create value for the client [17]: (1) Direct value variables, defined in a quantitative way: prices, quality mistakes or delivery items. (2) Indirect value variables, provided by relational factors, such as: cooperation [17]; commitment of resources [1]; trust [22]; customer orientation [18]; communication [17]; responsiveness [11], and customized services and products [12]. This second group has been identified as critical in many studies about business relationships [2] and [8], being related with the reduction of conflicts among channels and the improvement of firm’s performance [15] and [16]. Despite the merit of added-value proposals, few firms have systematically assessed the value of suppliers, due to the difficulties in the measurement of the second group of qualitative and intangible variables [8], [15] and [16]. The absence of these qualitative attributes in suppliers’ selection is not positive for the firm, which “fail to identify where opportunities exist to increase competitiveness, customer value, and shareholder value” [12, p. 1]. We propose a new model of suppliers’ selection that allows to combine both quantitative information (first group) and qualitative one (second group), also including the relative importance of each variable, using both ‘crisp’ and ‘fuzzy’ attributes [21] (for the first and second group of variables, respectively), combining them through the 2-tuple model proposed by Herrera and Martinez [6]. Thus, we will get an overall ranking of suppliers without losing significant information. Additionally, in order to get a graphical view of the relative position of sellers, a SOFM model will be developed, including in its construction the particular importance of analysed attributes.

The results obtained from this paper could be summarised in two main conclusions: First, we have checked that both numerical and linguistic information can be combined using the 2-tuple fuzzy linguistic model, in order to obtain a better representation of suppliers’ ability to create value for the customer. Additionally, it allows applying the value-added perspective on supplier selection, increasing the performance of the firm. Secondly, the use of the SOFM model, applied to previously processed data, allows obtaining a graphical view about the relative suitability of suppliers, and identifies strategic groups of them, which can be very useful for the logistic policy of the firm. Finally, the future applications of this sort of analysis should be pointed, being a tool to take strategic decisions for the firm’s management (personnel selection based on competences, client clustering using qualitative attributes, benchmarking problems, and others).