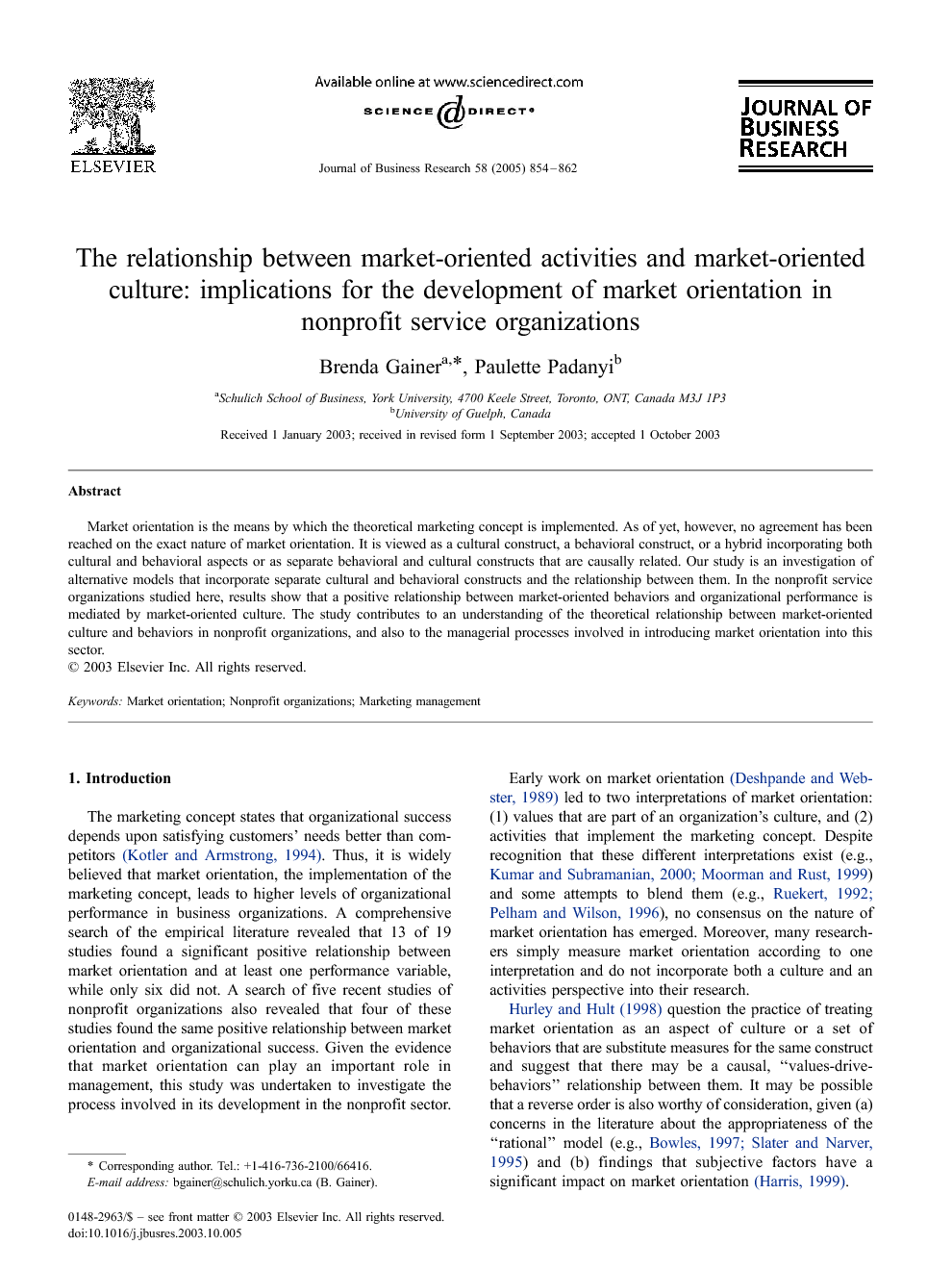 Market orientation is the means by which the theoretical marketing concept is implemented. As of yet, however, no agreement has been reached on the exact nature of market orientation. It is viewed as a cultural construct, a behavioral construct, or a hybrid incorporating both cultural and behavioral aspects or as separate behavioral and cultural constructs that are causally related. Our study is an investigation of alternative models that incorporate separate cultural and behavioral constructs and the relationship between them. In the nonprofit service organizations studied here, results show that a positive relationship between market-oriented behaviors and organizational performance is mediated by market-oriented culture. The study contributes to an understanding of the theoretical relationship between market-oriented culture and behaviors in nonprofit organizations, and also to the managerial processes involved in introducing market orientation into this sector.

This research confirms that both client-oriented culture and client-oriented behavior are important in predicting organizational performance and that there appears to be a causal relationship between them in which a client-oriented culture mediates the relationship between engagement in a specific set of activities and higher levels of client satisfaction with the organization, its programs and its role in the community. This study thus supports previous findings on the market orientation–performance relationship and provides empirical evidence that this theory can be extended to the nonprofit sector. Moreover, it provides important guidelines to managers about where to start when it comes to initiating change with respect to market orientation in nonprofit organizations. From a managerial perspective, initiating client-oriented activities prior to attempting to instill a client-oriented culture through education programs, for example, has practical advantages. Success with market-oriented activities may help overcome employee resistance to change. It should also reduce the risk to human and financial resources associated with imposing cultural change in a deliberate, top-down manner (Harris, 1999). Notably, in terms of management theory, the “activities predicts culture” finding is consistent with the “adoption–entrenchment” theory of new management processes proposed by Zeitz et al. (1999). Based on a combination of diffusion theory and institutional theory, they posit that adoption of new management processes is heavily influenced by modeling, that is, mimicry of other organizations and stories of the success achieved with other similar practices. Entrenchment of the new process occurs over time if organizational experiments with it prove successful. With entrenchment, the new approach becomes part of the organization's existing knowledge structure/culture and influences future activities related to it. It should be noted, however, that while this study contributes to both theoretical and practical knowledge of the organizational process involved in introducing a market orientation into nonprofit organizations, the limitations of the study suggest a number of areas in which further research could profitably be undertaken. Although cross-sectional studies are common in the market orientation literature, the findings would be improved if longitudinal data were collected on activities, culture, and outcomes. In addition, although CEOs are in a position to provide excellent information about the constructs measured here, data collected from multiple sources, such as peer organizations, employees, and clients themselves, would lead to a more complete understanding of the relationships between values and behaviors. Finally, we have collected data from a sample of organizations that represent a broad range of nonprofit activities and programs in an attempt to draw conclusions that are generalizable across large parts of the nonprofit sector. However, different patterns with regard to the implementation of market orientation may occur in nonprofit organizations that are focused on different types of activities (advocacy as opposed to service delivery) or that rely on different types of revenue sources (client fees as opposed to government grants as opposed to private donations) and a more complete understanding of the processes described here could perhaps be achieved through cross-sector analysis. Moreover, it may be that the market-back approach also applies to organizations outside the nonprofit sector and further empirical work could determine how far the results presented here extend.