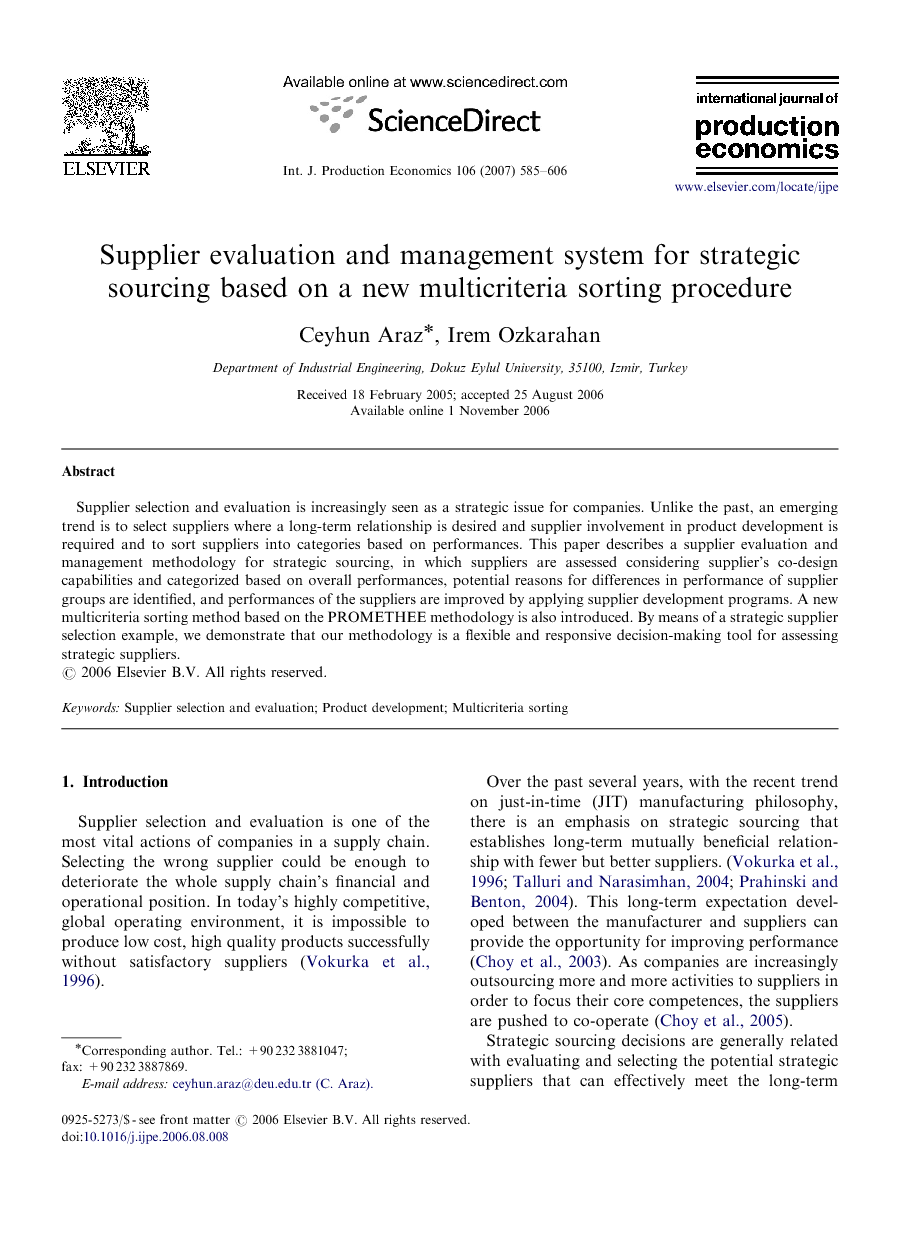 Supplier selection and evaluation is increasingly seen as a strategic issue for companies. Unlike the past, an emerging trend is to select suppliers where a long-term relationship is desired and supplier involvement in product development is required and to sort suppliers into categories based on performances. This paper describes a supplier evaluation and management methodology for strategic sourcing, in which suppliers are assessed considering supplier's co-design capabilities and categorized based on overall performances, potential reasons for differences in performance of supplier groups are identified, and performances of the suppliers are improved by applying supplier development programs. A new multicriteria sorting method based on the PROMETHEE methodology is also introduced. By means of a strategic supplier selection example, we demonstrate that our methodology is a flexible and responsive decision-making tool for assessing strategic suppliers.

Supplier selection and evaluation has ever been considered as an important function for the companies. Collaborating with the right suppliers and managing them is getting more important now with the strategic partnerships being implemented with suppliers to achieve a competitive advantage and the involvement of suppliers in product development stages. Therefore, effective methodologies that have the capability of evaluating and continually monitoring suppliers’ performance are still needed. In this paper, we proposed a supplier evaluation and management methodology for the product development process, in which suppliers are categorized and compared according to their performances on several design based criteria, potential reasons for differences in suppliers’ performances are identified, and performances of the suppliers are improved by applying supplier development programs. The proposed methodology considers the strategic partnership and concurrent product development concepts to identify the supplier selection criteria rather than the traditional selection criteria. This paper also describes a new MCS method, called as PROMSORT and based on the PROMETHEE methodology. We utilized it in sorting the suppliers based on their preference relations, which assist management in selecting suppliers for strategic partnership (“perfect” suppliers), supplier development programs (“good” suppliers), competitive partnership (“moderate” suppliers) and pruning (“bad” suppliers). On the other hand, it should be pointed out that, in the proposed methodology, all the parameters are determined by the decision maker. To find the appropriate set of parameters in practice is sometimes cumbersome. Therefore, one of the further research studies should be to develop an indirect estimation procedure for the parameters specified by the decision maker using a set of training samples. Another further study will be based on the fuzzification of the PROMSORT so that it can deal with fuzzy input data, since, as Kahraman et al. (2003) stated, some criteria may be impractical to evaluate, information may be difficult to obtain, complex to analyze, or there may not be sufficient time to perform these issues. When the performances of alternative suppliers can be only approximately determined, Fuzzy Set Theory (FST) effectively helps to model uncertainty and imprecision in supplier selection problems. Furthermore, the extension of this methodology which can handle veto situation may give more realistic results for strategic supplier selection problem.