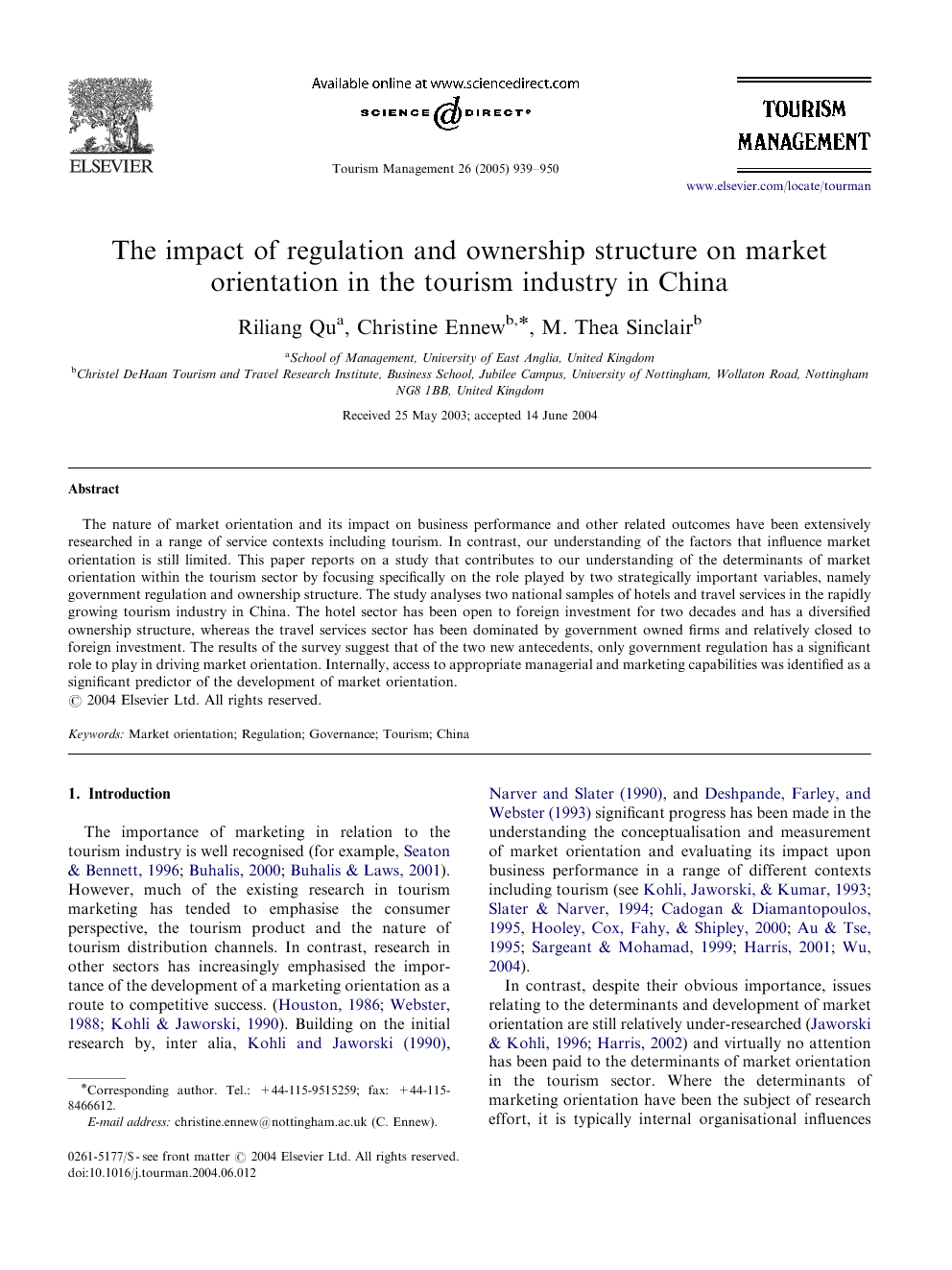 The nature of market orientation and its impact on business performance and other related outcomes have been extensively researched in a range of service contexts including tourism. In contrast, our understanding of the factors that influence market orientation is still limited. This paper reports on a study that contributes to our understanding of the determinants of market orientation within the tourism sector by focusing specifically on the role played by two strategically important variables, namely government regulation and ownership structure. The study analyses two national samples of hotels and travel services in the rapidly growing tourism industry in China. The hotel sector has been open to foreign investment for two decades and has a diversified ownership structure, whereas the travel services sector has been dominated by government owned firms and relatively closed to foreign investment. The results of the survey suggest that of the two new antecedents, only government regulation has a significant role to play in driving market orientation. Internally, access to appropriate managerial and marketing capabilities was identified as a significant predictor of the development of market orientation.

The importance of marketing in relation to the tourism industry is well recognised (for example, Seaton & Bennett, 1996; Buhalis, 2000; Buhalis & Laws, 2001). However, much of the existing research in tourism marketing has tended to emphasise the consumer perspective, the tourism product and the nature of tourism distribution channels. In contrast, research in other sectors has increasingly emphasised the importance of the development of a marketing orientation as a route to competitive success. (Houston, 1986; Webster, 1988; Kohli & Jaworski, 1990). Building on the initial research by, inter alia, Kohli and Jaworski (1990), Narver and Slater (1990), and Deshpande, Farley, and Webster (1993) significant progress has been made in the understanding the conceptualisation and measurement of market orientation and evaluating its impact upon business performance in a range of different contexts including tourism (see Kohli, Jaworski, & Kumar, 1993; Slater & Narver, 1994; Cadogan & Diamantopoulos, 1995, Hooley, Cox, Fahy, & Shipley, 2000; Au & Tse, 1995; Sargeant & Mohamad, 1999; Harris, 2001; Wu, 2004). In contrast, despite their obvious importance, issues relating to the determinants and development of market orientation are still relatively under-researched (Jaworski & Kohli, 1996; Harris, 2002) and virtually no attention has been paid to the determinants of market orientation in the tourism sector. Where the determinants of marketing orientation have been the subject of research effort, it is typically internal organisational influences that have been the focus of attention (e.g. Ruekert, 1992; Jaworski & Kohli, 1993; Harris (1996) and Harris (2000); Homburg & Pflesser, 2000; Cadogan, Paul, Salminen, Puumalainen, & Sundqvist, 2001). Notwithstanding the impact of the external environment on business performance and the integration of environmental influences into the original market orientation models (Kohli & Jaworski, 1990; Narver & Slater, 1990), researchers have devoted relatively little attention to exploring the impact of these variables in practice. Despite its economic significance, relatively little market orientation research has examined the travel and tourism sector and understanding of the factors that drive market orientation is, at best, limited. This paper aims to contribute to this relatively under-researched area by exploring both the internal and external influences on market orientation among hotels and travel services in China. In addition to an examination of existing, identified internal antecedents, the paper argues that governance issues may be of relevance to market orientation and considers the impact of ownership structure. With respect to external influences, the paper explicitly considers the impact of regulation—both of competition and product quality. The article begins with a brief review of the literature and discusses the development of hypotheses. The following sections explain the research method and data collection procedures. Thereafter, the results of the data analysis are presented and discussed and the final section provides a summary and conclusions.