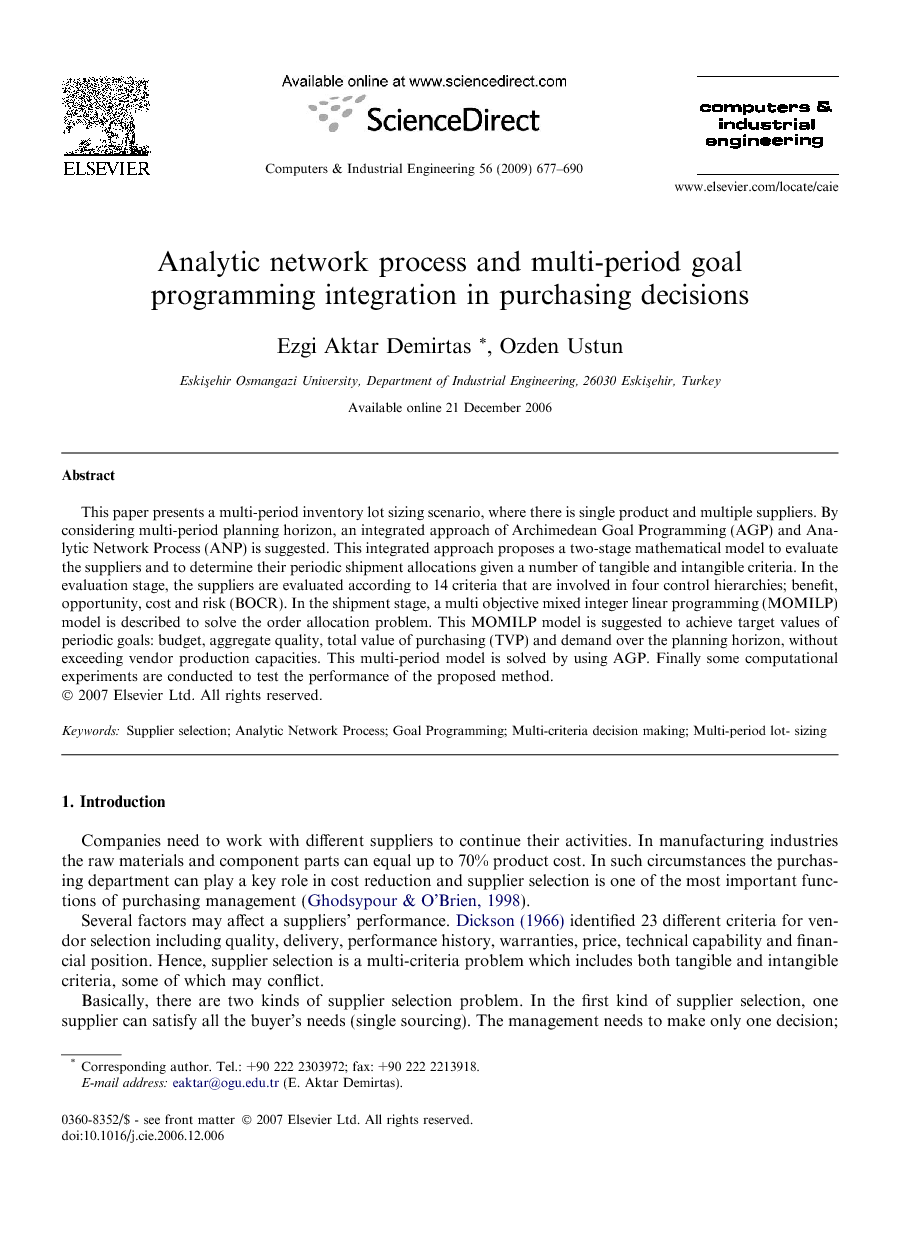 This paper presents a multi-period inventory lot sizing scenario, where there is single product and multiple suppliers. By considering multi-period planning horizon, an integrated approach of Archimedean Goal Programming (AGP) and Analytic Network Process (ANP) is suggested. This integrated approach proposes a two-stage mathematical model to evaluate the suppliers and to determine their periodic shipment allocations given a number of tangible and intangible criteria. In the evaluation stage, the suppliers are evaluated according to 14 criteria that are involved in four control hierarchies; benefit, opportunity, cost and risk (BOCR). In the shipment stage, a multi objective mixed integer linear programming (MOMILP) model is described to solve the order allocation problem. This MOMILP model is suggested to achieve target values of periodic goals: budget, aggregate quality, total value of purchasing (TVP) and demand over the planning horizon, without exceeding vendor production capacities. This multi-period model is solved by using AGP. Finally some computational experiments are conducted to test the performance of the proposed method.

Although, supplier selection problems are not new, quite a few researchers treat the supplier selection issue as an optimization problem, which requires the formulation of the objective function. Several mathematical models have been proposed for single and multiple sourcing supplier selection problems in the literature but, not every supplier selection criterion is quantitative, so only a few quantitative criteria are included in the optimization formulation in these studies. To overcome this drawback, some authors have suggested new models that integrate multi-criteria decision making techniques and the mathematical models with single or multi objectives for single period. Being different from previous studies, this paper presents an integration of ANP and AGP approach in multi-period inventory lot sizing scenario, where there are multiple suppliers and single product. A two-stage mathematical model was proposed to evaluate the suppliers and to determine their shipment allocations given a number of tangible and intangible criteria. In the evaluation stage, the suppliers were evaluated according to 14 criteria that are involved in four control hierarchies; benefits, opportunities, cost and risks (BOCR). Although AHP and ANP are the multi-criteria decision making techniques which provide to consider both tangible and intangible factors, AHP is not sufficient to catch the effects of the same level criteria on themselves and the effects of the alternatives on the criteria. To overcome the drawbacks of AHP, the priorities of suppliers were calculated by ANP although an increase in the number of pairwise comparisons and more complex calculations. Real data was used for the quantitative criteria in comparisons to improve the system consistency. These priorities obtained by ANP are used to calculate TVP, the third goal of shipment stage. In the shipment stage, to find the optimal order quantities and inventory levels, a multi-period AGP model was built to minimize unwanted deviations. It is conducted more computational experiments to test the performance of the proposed method. The sensitivity analysis of the AGP model was also performed for different levels of periodic budget, quality, TVP and demand. Sensitivity analyses can be enlarged with capacity levels and priorities of suppliers and different weights of goals for long term planning activities.