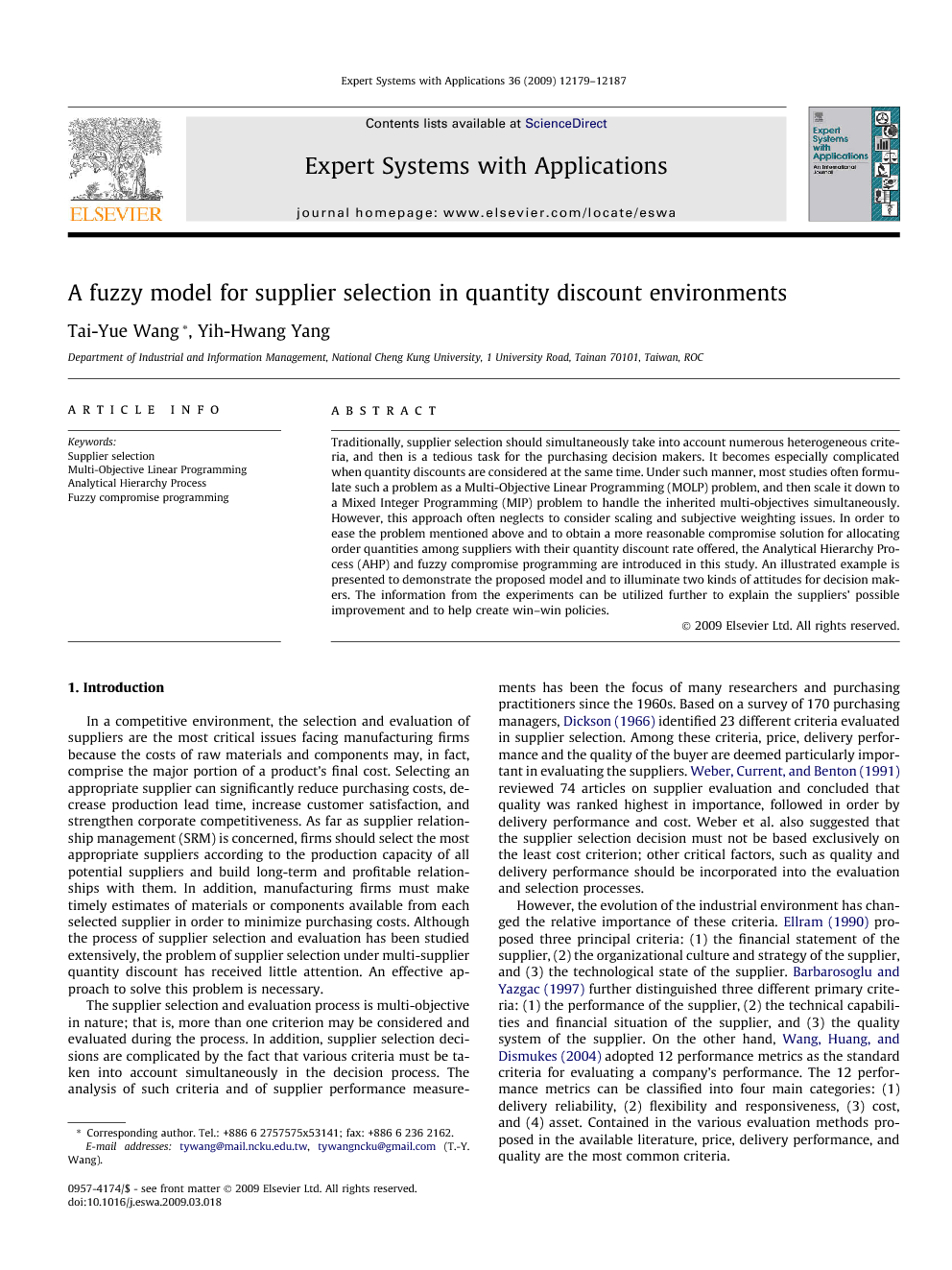 Traditionally, supplier selection should simultaneously take into account numerous heterogeneous criteria, and then is a tedious task for the purchasing decision makers. It becomes especially complicated when quantity discounts are considered at the same time. Under such manner, most studies often formulate such a problem as a Multi-Objective Linear Programming (MOLP) problem, and then scale it down to a Mixed Integer Programming (MIP) problem to handle the inherited multi-objectives simultaneously. However, this approach often neglects to consider scaling and subjective weighting issues. In order to ease the problem mentioned above and to obtain a more reasonable compromise solution for allocating order quantities among suppliers with their quantity discount rate offered, the Analytical Hierarchy Process (AHP) and fuzzy compromise programming are introduced in this study. An illustrated example is presented to demonstrate the proposed model and to illuminate two kinds of attitudes for decision makers. The information from the experiments can be utilized further to explain the suppliers’ possible improvement and to help create win–win policies.

Supplier selection in a quantity discount environment is the most critical activity in the process of making purchasing decisions. This importance would be increased more than usual while pursuing the competitive advantage. However, such problem is usually treated on the basis of the MOLP model where the objectives are not of equal importance. Thus, AHP and fuzzy compromise programming are employed in this study to facilitate such decision-making. With the help of these two transformations, a compromise solution satisfying most configurations of decision-makers’ preferences is generated efficiently in order to allocate purchasing quantities within a supplier base under the conditions of quantity discounts. The overall characteristics of this study can be summarized as follows: • In order to prevent the presence of nonhomogeneous measuring scales among different objectives in supply chain system, fuzzy compromise programming is employed to facilitate the generation of a more objective compromise solution. • By using the generalized MOLP model formulated in this study, decision-making related to purchasing strategies can be more easily realized while accounting for particular alliance relationships with suppliers. • Employing AHP to generate the most appropriate set of weights to accurately represent the relative importance of various objectives can generate more reasonable solutions. • In the realm of MOLP for supplier selection, the available literature reveals a general lack of the ability to simultaneously involve multi-objectives under various quantity discount rates. An efficient way to overcome this obstacle is offered in this study. • Both with the decision-makers’ attitudes of neutral and risk-averter, the most preferred supplier and their respective quantities ordered could easily be recognized. • Based on the information unveiled by the proposed model, candidate suppliers can also easily recognize their drawbacks and consequently improve their policies in the future, which could help create win–win policies among partners. Future studies of supplier selection procedures could explore an even more comprehensive model by introducing qualitative attributes in addition to quantitative attributes.