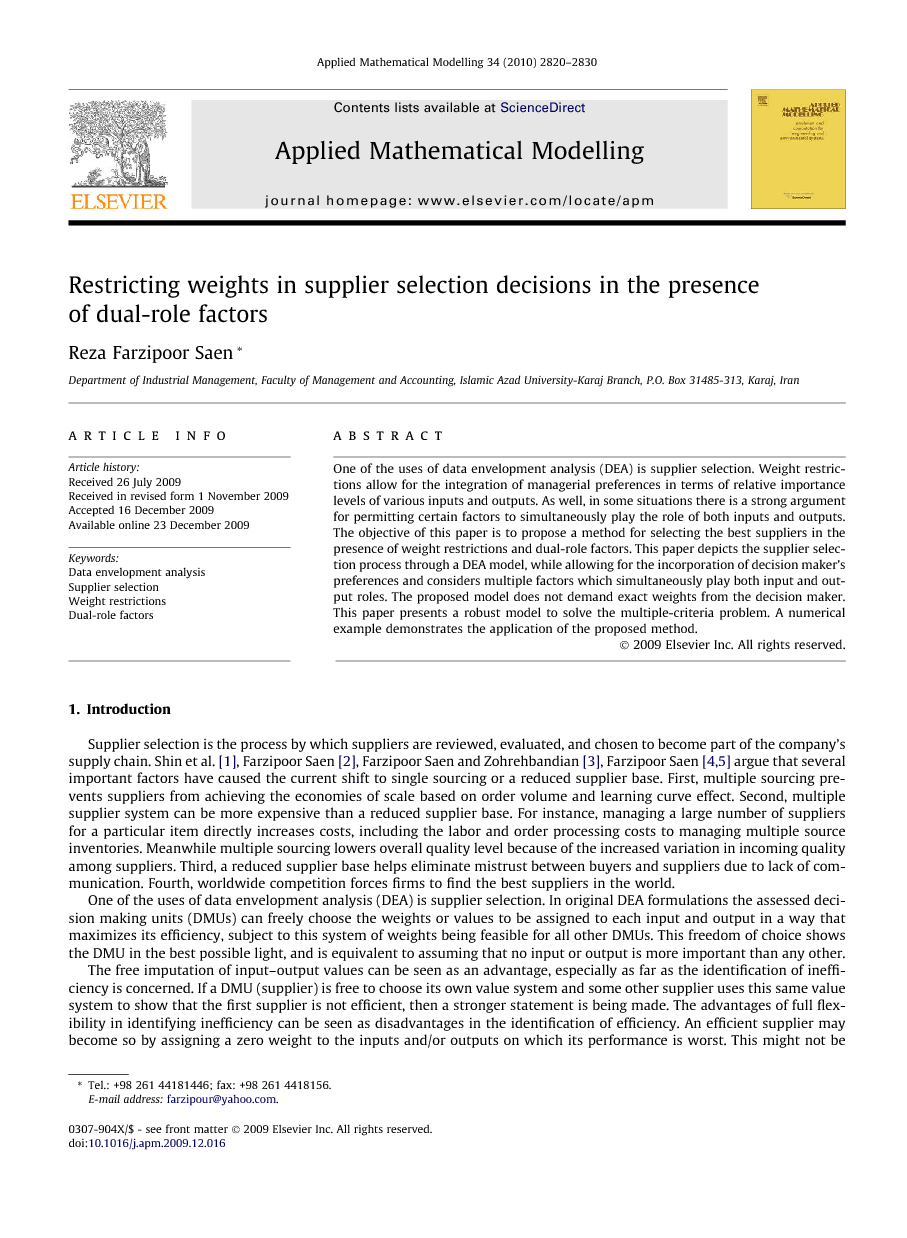 One of the uses of data envelopment analysis (DEA) is supplier selection. Weight restrictions allow for the integration of managerial preferences in terms of relative importance levels of various inputs and outputs. As well, in some situations there is a strong argument for permitting certain factors to simultaneously play the role of both inputs and outputs. The objective of this paper is to propose a method for selecting the best suppliers in the presence of weight restrictions and dual-role factors. This paper depicts the supplier selection process through a DEA model, while allowing for the incorporation of decision maker’s preferences and considers multiple factors which simultaneously play both input and output roles. The proposed model does not demand exact weights from the decision maker. This paper presents a robust model to solve the multiple-criteria problem. A numerical example demonstrates the application of the proposed method.

Supplier selection is the process by which suppliers are reviewed, evaluated, and chosen to become part of the company’s supply chain. Shin et al. [1], Farzipoor Saen [2], Farzipoor Saen and Zohrehbandian [3], Farzipoor Saen [4] and [5] argue that several important factors have caused the current shift to single sourcing or a reduced supplier base. First, multiple sourcing prevents suppliers from achieving the economies of scale based on order volume and learning curve effect. Second, multiple supplier system can be more expensive than a reduced supplier base. For instance, managing a large number of suppliers for a particular item directly increases costs, including the labor and order processing costs to managing multiple source inventories. Meanwhile multiple sourcing lowers overall quality level because of the increased variation in incoming quality among suppliers. Third, a reduced supplier base helps eliminate mistrust between buyers and suppliers due to lack of communication. Fourth, worldwide competition forces firms to find the best suppliers in the world. One of the uses of data envelopment analysis (DEA) is supplier selection. In original DEA formulations the assessed decision making units (DMUs) can freely choose the weights or values to be assigned to each input and output in a way that maximizes its efficiency, subject to this system of weights being feasible for all other DMUs. This freedom of choice shows the DMU in the best possible light, and is equivalent to assuming that no input or output is more important than any other. The free imputation of input–output values can be seen as an advantage, especially as far as the identification of inefficiency is concerned. If a DMU (supplier) is free to choose its own value system and some other supplier uses this same value system to show that the first supplier is not efficient, then a stronger statement is being made. The advantages of full flexibility in identifying inefficiency can be seen as disadvantages in the identification of efficiency. An efficient supplier may become so by assigning a zero weight to the inputs and/or outputs on which its performance is worst. This might not be acceptable by decision makers as well as by the analyst, who after spending time in a careful selection of inputs and outputs sees some of them being completely neglected by suppliers. Decision makers may have in supplier selection problems value judgments that can be formalized a priori, and therefore should be taken into account in supplier selection. These value judgments can reflect known information about how the factors used by the suppliers behave, and/or “accepted” beliefs or preferences on the relative worth of inputs, outputs or even suppliers. For example, in supplier selection problem in general, one input (material price) usually overwhelms all other inputs, and ignoring this aspect may lead to biased efficiency results. Suppliers might also supply some outputs that require considerably more resources than others and this marginal rate of substitution between outputs should somehow be taken into account when selecting a supplier. To avoid the problem of free (and often undesirable) specialization, input and output weights should be constrained in DEA. In some situations there is a strong argument for permitting certain factors to simultaneously play the role of both inputs and outputs. In supplier selection context, the research and development cost can be considered as both an input and an output. Remembering that the simple definition of efficiency is the ratio of output to input, an output can be defined as anything whose increase will cause an increase in efficiency. Similarly, an input can be defined as anything whose decrease will cause an increase in efficiency. If the research and development cost is considered as an output, then the increase in the research and development cost will increase the efficiency of the supplier. Likewise, if the research and development cost is considered as an input, then any decrease in the research and development cost without a proportional decrease in the outputs will increase efficiency. So, depending on how one looks at it, either increasing or decreasing the research and development cost can increase efficiency. As well, as Farzipoor Saen [6] discussed, the factors such as ratings for service-quality experience (EXP) and service-quality credence (CRE) were considered dual-role factors. From the perspective of decision maker who intends to select the best supplier, such measures may play the role of proxy for “high quality of services”, hence can reasonably be classified as outputs. On the other hand, from the perspective of supplier that intends to supply reverse logistics services, they can be considered as inputs that help the supplier in obtaining more customers. Beasley [7] and [8], in a study of the efficiency of university departments, treated research funding on both the input and output sides. However, as Cook et al. [9] addressed, the model proposed by Beasley [7] and [8] has two limitations. The first limitation is that in the absence of constraints (e.g., assurance region or cone-ratio) on the multipliers, each DMU will be 100% efficient. The second limitation is that the dual-role factor is considered as a discretionary factor. Cook et al. [9] developed a new model that has not the above mentioned limitations. However, their development pertains to a single dual-role factor and does not consider multiple dual-role factors. The objective of this paper is to propose a method for selecting the best suppliers in the presence of both weight restrictions and dual-role factors. This paper depicts the supplier selection process through a DEA model, while allowing for the incorporation of decision maker’s preferences and considers multiple factors which simultaneously play both input and output roles. This paper proceeds as follows. In Section 2, literature review is presented. Section 3 introduces the method which selects the suppliers. Numerical example and concluding remarks are discussed in Sections 4 and 5, respectively.

Strong competitive pressure forces many organizations to provide their products and services to customers faster, cheaper and better than the competitors. Managers have come to realize that they cannot do it alone without satisfactory suppliers. Therefore, the increasing importance of supplier selection decisions is forcing organizations to rethink their purchasing and evaluation strategies and hence the selection of suppliers has received considerable attention in the purchasing literature. This paper has provided a model for selecting suppliers in the presence of dual-role factors and weight restriction. Notice that, whatever we propose any possible process to improve DEA model, there always is a result that shows the best DMUs as efficient so that their efficiency scores equal to one. The reason is that DEA measures the relative efficiency of DMUs. As well, there are too many DEA models. Each DEA model has a specific assumption which should be considered beforehand. In real world, decision makers should take into consideration theses assumptions. As a result, the proposed model is only a possible way to achieve better supplier selection but not sufficient. In other words, the proposed model assumes that weight restrictions and dual-role factors are present. It is obvious that if these assumptions are not applicable, the proposed model can not be used. The problem considered in this study is at initial stage of investigation and many further researches can be done based on the results of this paper. Some of them are as follow: – Similar research can be repeated for dealing with fuzzy data in the conditions that dual-role factors exist. – One of the limitations of this paper is that the proposed model assumes all suppliers are completely homogeneous. As Farzipoor Saen [59] discussed, the assumption of classical supplier selection models is based on the principle that suppliers consume common inputs to supply common outputs. In spite of this assumption in many applications some suppliers do not comprehensively consume common inputs to comprehensively supply common outputs. In other words, different industrial suppliers may have many differences between them. To evaluate the relative efficiency of suppliers, all the suppliers may not have identical functions. For instance, to select a supplier most of inputs and outputs (selection criteria) of suppliers are common, but there are a few input (s) and/or output (s) for some suppliers that may not be common to all. In a supplier evaluation example that buyer consumes two types of materials such as type A and type B. A supplier may not supply type B. To evaluate this supplier, considering cost as an input, cost of type B for the supplier is meaningless. It is clear that zero value allocation for this type of input, causes relative efficiency of the supplier, to increase unrealistically. In this case, it is not acceptable saying that the suppliers which do not supply material of type B, are not comparable with the suppliers which supply material of type B. Meanwhile, allocating zero value to suppliers that do not supply material of type B, is not fair. Generally, zero allocation to outputs and inputs of some suppliers, makes the efficiency evaluation unfair. That is zero allocation to output, may make a supplier inefficient, on the other hand, zero allocation to input, may make a supplier efficient, unrealistically. Farzipoor Saen [59] and Farzipoor Saen [60] propose a model for selecting slightly non-homogeneous suppliers. However, he did not consider weight restrictions and dual-role factors. A potential extension to the methodology includes the case that some of the suppliers are slightly non-homogeneous in the presence of both weight restrictions and dual-role factors. – This study used the proposed model for supplier selection. It seems that more fields (e.g. technology selection, personnel selection, etc.) can be applied.