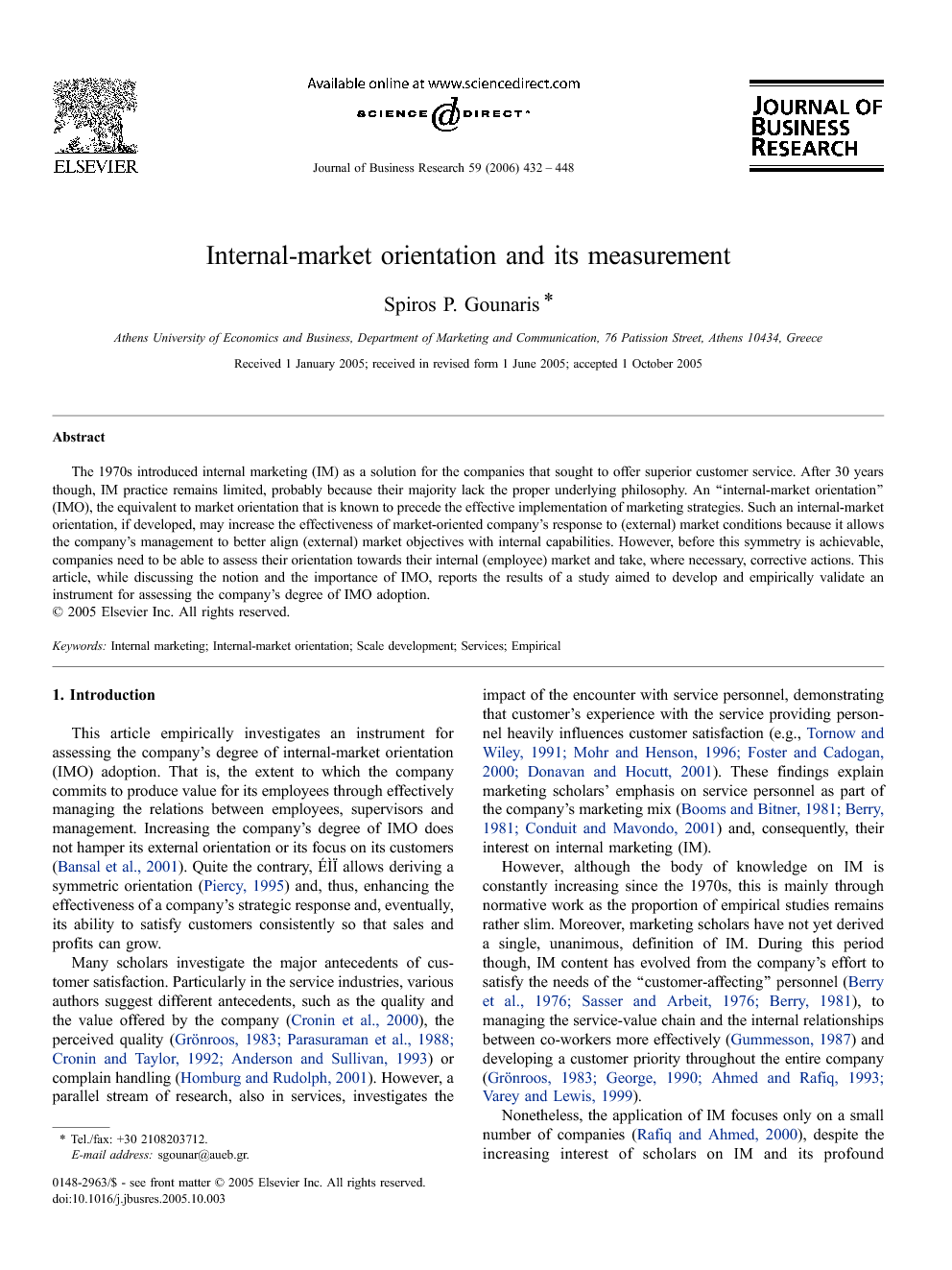 The 1970s introduced internal marketing (IM) as a solution for the companies that sought to offer superior customer service. After 30 years though, IM practice remains limited, probably because their majority lack the proper underlying philosophy. An “internal-market orientation” (IMO), the equivalent to market orientation that is known to precede the effective implementation of marketing strategies. Such an internal-market orientation, if developed, may increase the effectiveness of market-oriented company's response to (external) market conditions because it allows the company's management to better align (external) market objectives with internal capabilities. However, before this symmetry is achievable, companies need to be able to assess their orientation towards their internal (employee) market and take, where necessary, corrective actions. This article, while discussing the notion and the importance of IMO, reports the results of a study aimed to develop and empirically validate an instrument for assessing the company's degree of IMO adoption.

This article empirically investigates an instrument for assessing the company's degree of internal-market orientation (IMO) adoption. That is, the extent to which the company commits to produce value for its employees through effectively managing the relations between employees, supervisors and management. Increasing the company's degree of IMO does not hamper its external orientation or its focus on its customers (Bansal et al., 2001). Quite the contrary, ÉÌÏ allows deriving a symmetric orientation (Piercy, 1995) and, thus, enhancing the effectiveness of a company's strategic response and, eventually, its ability to satisfy customers consistently so that sales and profits can grow. Many scholars investigate the major antecedents of customer satisfaction. Particularly in the service industries, various authors suggest different antecedents, such as the quality and the value offered by the company (Cronin et al., 2000), the perceived quality (Grönroos, 1983, Parasuraman et al., 1988, Cronin and Taylor, 1992 and Anderson and Sullivan, 1993) or complain handling (Homburg and Rudolph, 2001). However, a parallel stream of research, also in services, investigates the impact of the encounter with service personnel, demonstrating that customer's experience with the service providing personnel heavily influences customer satisfaction (e.g., Tornow and Wiley, 1991, Mohr and Henson, 1996, Foster and Cadogan, 2000 and Donavan and Hocutt, 2001). These findings explain marketing scholars' emphasis on service personnel as part of the company's marketing mix (Booms and Bitner, 1981, Berry, 1981 and Conduit and Mavondo, 2001) and, consequently, their interest on internal marketing (IM). However, although the body of knowledge on IM is constantly increasing since the 1970s, this is mainly through normative work as the proportion of empirical studies remains rather slim. Moreover, marketing scholars have not yet derived a single, unanimous, definition of IM. During this period though, IM content has evolved from the company's effort to satisfy the needs of the “customer-affecting” personnel (Berry et al., 1976, Sasser and Arbeit, 1976 and Berry, 1981), to managing the service-value chain and the internal relationships between co-workers more effectively (Gummesson, 1987) and developing a customer priority throughout the entire company (Grönroos, 1983, George, 1990, Ahmed and Rafiq, 1993 and Varey and Lewis, 1999). Nonetheless, the application of IM focuses only on a small number of companies (Rafiq and Ahmed, 2000), despite the increasing interest of scholars on IM and its profound importance for service industries. This constrained focus occurs because companies lack the underlying philosophy that can facilitate the implementation of IM strategies. A company philosophy analogous to that of “market orientation” (e.g., Kohli and Jaworski, 1990 and Narver and Slater, 1990) which precedes the company's ability to develop effective marketing strategies. Moreover, the fact that existing literature on IMO remains thin and sporadic while its measurement lacks empirical validation, may further explain why the implementation of IM remains limited. To this end, the contribution of this manuscript is that it provides an instrument that future researchers may employee in order to investigate further how IMO adoption influences the application of IM practices and the effectiveness of the company's strategic response. The structure of the manuscript is as follows: The first section of the manuscript presents the existing literature in order to clarify and establish the concept of IMO. The Next section presents the method and the analysis of the data. The discussion and the limitations and future research sections follow.