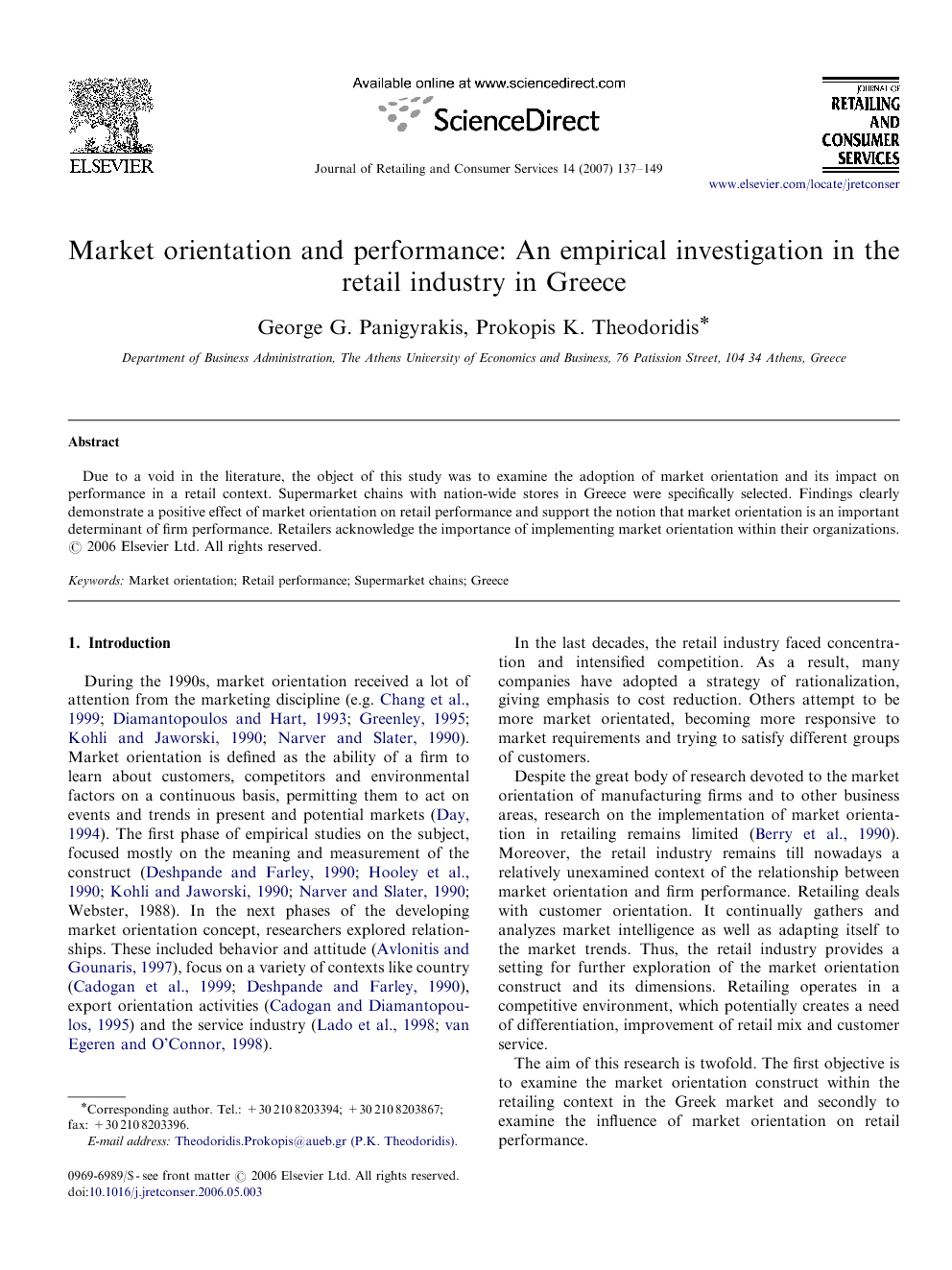 During the 1990s, market orientation received a lot of attention from the marketing discipline (e.g. Chang et al., 1999; Diamantopoulos and Hart, 1993; Greenley, 1995; Kohli and Jaworski, 1990; Narver and Slater, 1990). Market orientation is defined as the ability of a firm to learn about customers, competitors and environmental factors on a continuous basis, permitting them to act on events and trends in present and potential markets (Day, 1994). The first phase of empirical studies on the subject, focused mostly on the meaning and measurement of the construct (Deshpande and Farley, 1990; Hooley et al., 1990; Kohli and Jaworski, 1990; Narver and Slater, 1990; Webster, 1988). In the next phases of the developing market orientation concept, researchers explored relationships. These included behavior and attitude (Avlonitis and Gounaris, 1997), focus on a variety of contexts like country (Cadogan et al., 1999; Deshpande and Farley, 1990), export orientation activities (Cadogan and Diamantopoulos, 1995) and the service industry (Lado et al., 1998; van Egeren and O’Connor, 1998). In the last decades, the retail industry faced concentration and intensified competition. As a result, many companies have adopted a strategy of rationalization, giving emphasis to cost reduction. Others attempt to be more market orientated, becoming more responsive to market requirements and trying to satisfy different groups of customers. Despite the great body of research devoted to the market orientation of manufacturing firms and to other business areas, research on the implementation of market orientation in retailing remains limited (Berry et al., 1990). Moreover, the retail industry remains till nowadays a relatively unexamined context of the relationship between market orientation and firm performance. Retailing deals with customer orientation. It continually gathers and analyzes market intelligence as well as adapting itself to the market trends. Thus, the retail industry provides a setting for further exploration of the market orientation construct and its dimensions. Retailing operates in a competitive environment, which potentially creates a need of differentiation, improvement of retail mix and customer service. The aim of this research is twofold. The first objective is to examine the market orientation construct within the retailing context in the Greek market and secondly to examine the influence of market orientation on retail performance.

This is one of the very few studies, which has examined the adoption of market orientation in retail organizations. The role of marketing both as a specialist function and dominant organizational culture in retailing in Greece has grown, as retailers have become more concentrated and face intensive competition. The findings of this study have some important managerial implications. Firstly, the identified positive affect of market orientation on performance supports a proposition running through the marketing literature which states that the achievement of organizational goals is determined by satisfying the needs of customers more efficiently and effectively than competitors. The research represents an application and adaptation of the MARKOR scale to the retail sector and provides empirical evidence of a direct link between market orientation and organizational performance. The results confirm that a market orientation is a worthwhile management goal to adopt and highlight that retailers need to proceed by gathering and disseminating information in order to respond to the market. The findings suggest that retailers in Greece implement market orientation. It seems that retailers acknowledge the importance of implementing market orientation within their organizations. Findings are consistent of what was expected and support the notion that market orientation is an important determinant of firm performance. It is revealed that market-orientated retail organizations have similar characteristics to those identified in market-orientated manufacturing organizations such as generating and responding to market intelligence, coordinating business activities and having a market focus. There is a need that managers should consider their underlying business philosophy and become more customer and competitor orientated at the corporate level, in branches and across the different functional departments. It is certain that the findings need to be evaluated in light of the study's limitations: single key informant, one type of retailing and lack of cross-sectional data. In methodological terms, there is a need of additional analysis of the relationships between the three dimensions of the MARKOR construct. Furthermore, it is crucial to underline the post hoc analysis employed when examining the MARKOR scale, evidence of the exploratory nature of the procedure. It seems that there is a need of further exploring the adoption of the specific construct and its adaptation to reflect the retail context and organization. Also, it is important to remember that the subjective measures of any business performance are overestimated when compared to objective measures. The next step would be the examination of the relationships between market orientation, performance (financial and non-financial measures) and internal aspects of the organization such as internal market orientation. This triangle needs more attention and empirical investigation. This study clearly supports the positive effect of market orientation on firm performance. Retailers operating in Greece should continue their efforts in being more market oriented. This means however, that there is an extremely urgent need of adaptation and even changing the archaic mentality in their firms, in order to be market driven.