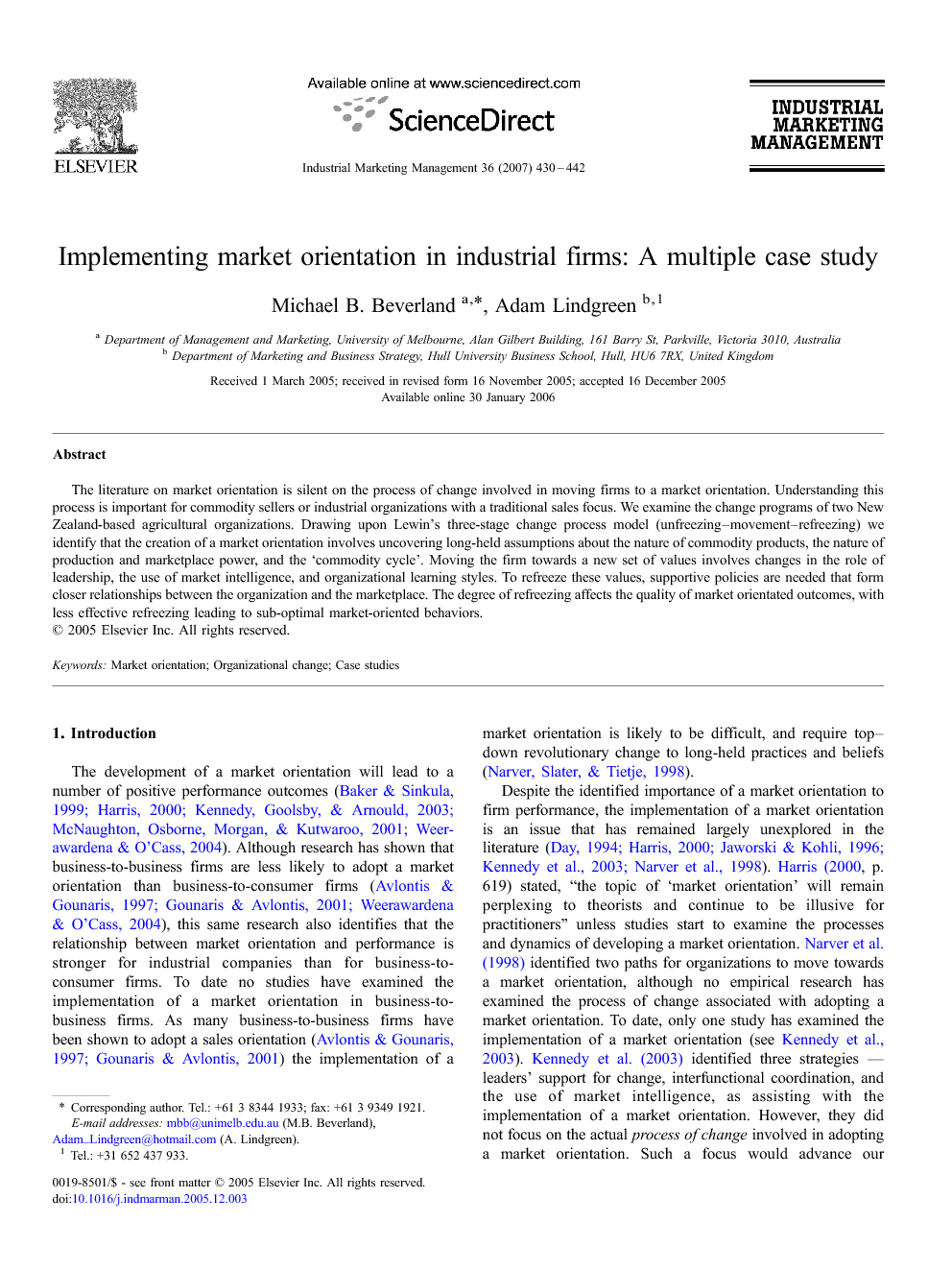 The literature on market orientation is silent on the process of change involved in moving firms to a market orientation. Understanding this process is important for commodity sellers or industrial organizations with a traditional sales focus. We examine the change programs of two New Zealand-based agricultural organizations. Drawing upon Lewin's three-stage change process model (unfreezing–movement–refreezing) we identify that the creation of a market orientation involves uncovering long-held assumptions about the nature of commodity products, the nature of production and marketplace power, and the ‘commodity cycle’. Moving the firm towards a new set of values involves changes in the role of leadership, the use of market intelligence, and organizational learning styles. To refreeze these values, supportive policies are needed that form closer relationships between the organization and the marketplace. The degree of refreezing affects the quality of market orientated outcomes, with less effective refreezing leading to sub-optimal market-oriented behaviors.

This article addressed two questions. First, we identified that Lewin's (1951) planned change model captured the dynamics of adopting a market orientation. Secondly, we combined planned change theories with the limited research on implementing a market orientation. We posited that leadership, the form and use of market intelligence, the form of interfunctional coordination, learning style and challenges would change across the three phases of unfreezing, movement, and refreezing. Based on a comparison of two cases, we identified how the role and importance of these variables changed across the three phases of the change process (see Table 4). This was supported with real time industry data, providing the first examples of the process of change towards market orientation. As such, this article both identifies new insights, and extends extant theory by building on the results of Kennedy et al. (2003) and Narver et al. (1998).The adoption of a market orientation by the cases illustrates the complex and often politicized process involved in implementing marketing programs. To implement a market orientation, the marketers studied had to overcome a lack of influence and formal power. As a result they formed coalitions with key stakeholders, used market research to influence organizational members, and had to continue to build and sustain support for a market orientation throughout the change process. To date, little emphasis has been placed on marketers political role within firms even though this is necessary to implement marketing programs. Future research needs to examine how marketers effectively implement strategies given that they often have little direct authority over functional areas critical to the implementation of market orientation.