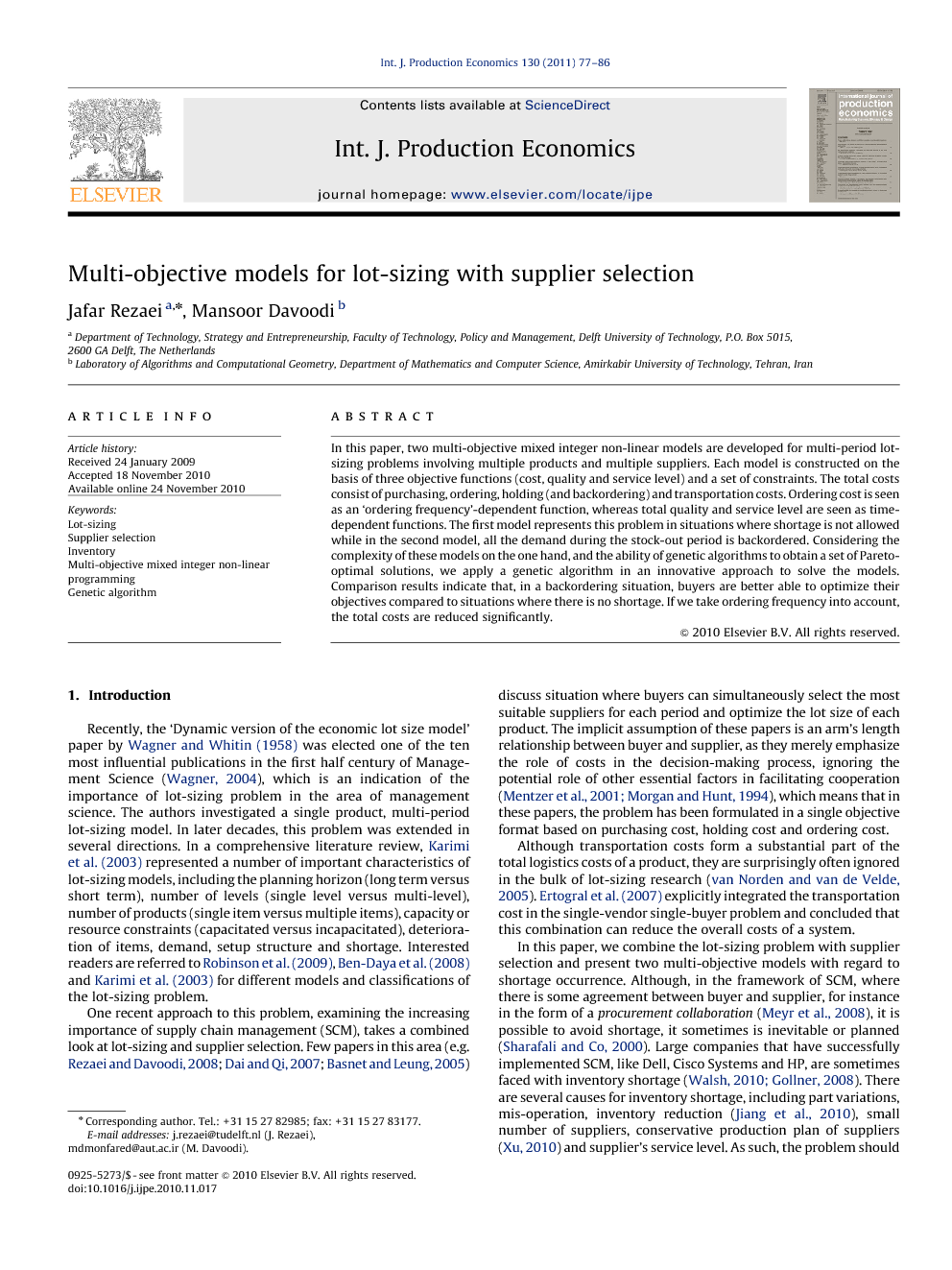 In this paper, two multi-objective mixed integer non-linear models are developed for multi-period lot-sizing problems involving multiple products and multiple suppliers. Each model is constructed on the basis of three objective functions (cost, quality and service level) and a set of constraints. The total costs consist of purchasing, ordering, holding (and backordering) and transportation costs. Ordering cost is seen as an ‘ordering frequency’-dependent function, whereas total quality and service level are seen as time-dependent functions. The first model represents this problem in situations where shortage is not allowed while in the second model, all the demand during the stock-out period is backordered. Considering the complexity of these models on the one hand, and the ability of genetic algorithms to obtain a set of Pareto-optimal solutions, we apply a genetic algorithm in an innovative approach to solve the models. Comparison results indicate that, in a backordering situation, buyers are better able to optimize their objectives compared to situations where there is no shortage. If we take ordering frequency into account, the total costs are reduced significantly.

Recently, the ‘Dynamic version of the economic lot size model’ paper by Wagner and Whitin (1958) was elected one of the ten most influential publications in the first half century of Management Science (Wagner, 2004), which is an indication of the importance of lot-sizing problem in the area of management science. The authors investigated a single product, multi-period lot-sizing model. In later decades, this problem was extended in several directions. In a comprehensive literature review, Karimi et al. (2003) represented a number of important characteristics of lot-sizing models, including the planning horizon (long term versus short term), number of levels (single level versus multi-level), number of products (single item versus multiple items), capacity or resource constraints (capacitated versus incapacitated), deterioration of items, demand, setup structure and shortage. Interested readers are referred to Robinson et al. (2009), Ben-Daya et al. (2008) and Karimi et al. (2003) for different models and classifications of the lot-sizing problem. One recent approach to this problem, examining the increasing importance of supply chain management (SCM), takes a combined look at lot-sizing and supplier selection. Few papers in this area (e.g. Rezaei and Davoodi, 2008; Dai and Qi, 2007; Basnet and Leung, 2005) discuss situation where buyers can simultaneously select the most suitable suppliers for each period and optimize the lot size of each product. The implicit assumption of these papers is an arm’s length relationship between buyer and supplier, as they merely emphasize the role of costs in the decision-making process, ignoring the potential role of other essential factors in facilitating cooperation (Mentzer et al., 2001 and Morgan and Hunt, 1994), which means that in these papers, the problem has been formulated in a single objective format based on purchasing cost, holding cost and ordering cost. Although transportation costs form a substantial part of the total logistics costs of a product, they are surprisingly often ignored in the bulk of lot-sizing research (van Norden and van de Velde, 2005). Ertogral et al. (2007) explicitly integrated the transportation cost in the single-vendor single-buyer problem and concluded that this combination can reduce the overall costs of a system. In this paper, we combine the lot-sizing problem with supplier selection and present two multi-objective models with regard to shortage occurrence. Although, in the framework of SCM, where there is some agreement between buyer and supplier, for instance in the form of a procurement collaboration ( Meyr et al., 2008), it is possible to avoid shortage, it sometimes is inevitable or planned ( Sharafali and Co, 2000). Large companies that have successfully implemented SCM, like Dell, Cisco Systems and HP, are sometimes faced with inventory shortage ( Walsh, 2010 and Gollner, 2008). There are several causes for inventory shortage, including part variations, mis-operation, inventory reduction ( Jiang et al., 2010), small number of suppliers, conservative production plan of suppliers ( Xu, 2010) and supplier’s service level. As such, the problem should be studied in two different situations: (1) when shortage is avoidable and (2) when shortage is inevitable or planned. Taking these two different scenarios into account, the first model is formulated assuming the shortage is not allowed, whereas in the second model the shortage is assumed to be allowed and backordered. Thus far, only a few researchers have used genetic algorithms to try and solve the inventory and lot-sizing problems in general (Gupta et al., 2007, Rezaei and Davoodi, 2005, van Hop and Tabucanon, 2005, Dellaert et al., 2000 and Disney et al., 2000) and ‘lot-sizing with supplier selection problem’ in particular (e.g. Sadeghi Moghadam et al., 2008, Rezaei and Davoodi, 2008, Rezaei and Davoodi, 2006, Liao and Rittscher, 2007, Xie and Dong, 2002 and Dellaert et al., 2000). In this paper, we look at some robust and unique characteristics of genetic algorithms, especially those dealing with multi-objective problems, and adopt a genetic algorithm approach to solve these problems, introducing a new flexible approach to dealing with hard constraints in multi-objective optimization problems. The remainder of this paper is organized as follows. In Section 2, we present the formulation of the models. In Section 3, we present a genetic algorithm to solve these models. In Section 4, two numerical examples and comparison results are presented. Finally, in Section 5, we provide our conclusions and offer suggestions for future research.

Lot-sizing and supplier selection are two important decisions any buyer has to make. However, due to the inherent interdependency between these two decisions, the buyer cannot optimize them separately. To combine the two, the buyer needs to consider the main objectives with regard to supplier selection, such as cost minimization, and quality and service level maximization (Ghodsypour and O'Brien, 1998 and Ghodsypour and O'Brien, 2001), and with regard to lot-sizing, things like as inventory costs minimization. To that end, in this paper, we have formulated two multi-objective optimization models based on two scenarios where shortage plays a role. The first model is geared towards situations where customers are not in the habit of wanting to wait and the buyer does not want to be faced with lost sales, while the second model is geared towards situations where customers accept late delivery. The results indicate that, if the customer agrees to late delivery (backordering) the minimum level of buyer's inventory costs is less than if the buyer has to meet all demands at the requested time. In formulating the ordering costs and looking at the effect of order frequency on ordering costs, we have applied a new approach that creates a long term relationship between buyer and supplier. This does not mean that the buyer reduces the size of the orders he places with the suppliers to increase the order frequency and thereby reduce ordering costs. Instead, the buyer places orders with a limited number of suppliers more frequently, rather than dispersing the orders among a large number of suppliers. In methodological terms, this paper introduces a novel, easy and flexible operator (the refiner operator) in the applied genetic algorithm dealing with the ‘hard constraints’ of the models. This operator not only speeds up the algorithm to find the feasible solutions but also improves the convergence of the solutions to the Pareto-regions while preserving population density. This paper suggests a number of avenues for future research. In this paper, the supplier's service level and quality level are treated as time-dependent functions. Although this makes the model closer to real-world problems, as far as future research is concerned, we suggest examining the effects of other attributes of buyer–supplier relationships on supplier quality and service level, for instance information sharing, supply risk, power balance and joint investment in quality improvement. In addition, we suggest investigating problems associated with lost sales and the combination of lost sales and backordering conditions. In this paper, the prices proposed by suppliers are assumed to be independent of the size of orders being placed. However, in some cases, suppliers are prone to give size-dependent discounts, which means that it may be interesting to investigate the problems discussed in this paper taking discounts into account, while at the same time taking a look at the relationship between price levels and customer demand.