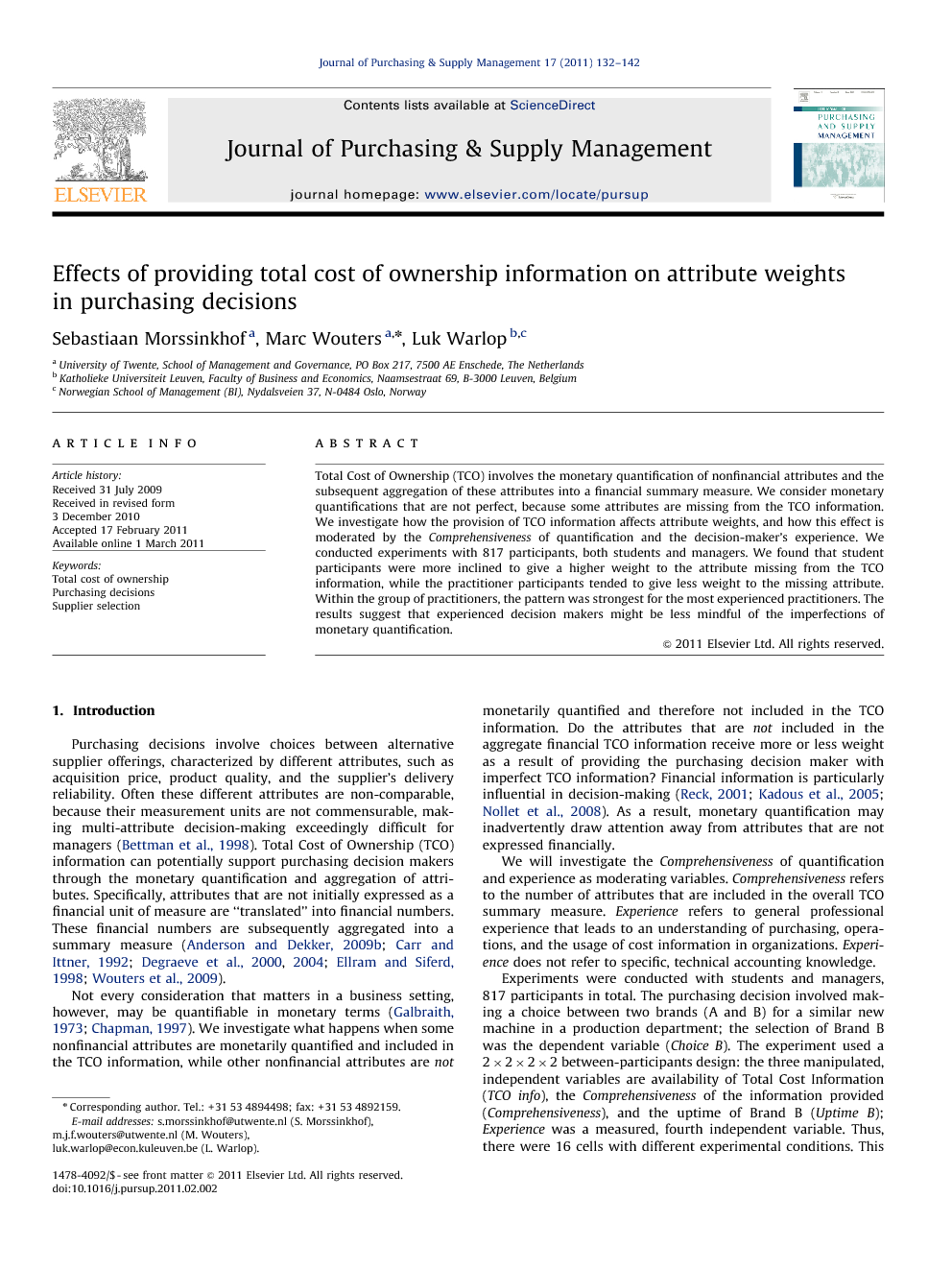 Total Cost of Ownership (TCO) involves the monetary quantification of nonfinancial attributes and the subsequent aggregation of these attributes into a financial summary measure. We consider monetary quantifications that are not perfect, because some attributes are missing from the TCO information. We investigate how the provision of TCO information affects attribute weights, and how this effect is moderated by the Comprehensiveness of quantification and the decision-maker’s experience. We conducted experiments with 817 participants, both students and managers. We found that student participants were more inclined to give a higher weight to the attribute missing from the TCO information, while the practitioner participants tended to give less weight to the missing attribute. Within the group of practitioners, the pattern was strongest for the most experienced practitioners. The results suggest that experienced decision makers might be less mindful of the imperfections of monetary quantification.

Purchasing decisions involve choices between alternative supplier offerings, characterized by different attributes, such as acquisition price, product quality, and the supplier’s delivery reliability. Often these different attributes are non-comparable, because their measurement units are not commensurable, making multi-attribute decision-making exceedingly difficult for managers (Bettman et al., 1998). Total Cost of Ownership (TCO) information can potentially support purchasing decision makers through the monetary quantification and aggregation of attributes. Specifically, attributes that are not initially expressed as a financial unit of measure are “translated” into financial numbers. These financial numbers are subsequently aggregated into a summary measure (Anderson and Dekker, 2009b, Carr and Ittner, 1992, Degraeve et al., 2000, Degraeve et al., 2004, Ellram and Siferd, 1998 and Wouters et al., 2009). Not every consideration that matters in a business setting, however, may be quantifiable in monetary terms (Galbraith, 1973 and Chapman, 1997). We investigate what happens when some nonfinancial attributes are monetarily quantified and included in the TCO information, while other nonfinancial attributes are not monetarily quantified and therefore not included in the TCO information. Do the attributes that are not included in the aggregate financial TCO information receive more or less weight as a result of providing the purchasing decision maker with imperfect TCO information? Financial information is particularly influential in decision-making ( Reck, 2001, Kadous et al., 2005 and Nollet et al., 2008). As a result, monetary quantification may inadvertently draw attention away from attributes that are not expressed financially. We will investigate the Comprehensiveness of quantification and experience as moderating variables. Comprehensiveness refers to the number of attributes that are included in the overall TCO summary measure. Experience refers to general professional experience that leads to an understanding of purchasing, operations, and the usage of cost information in organizations. Experience does not refer to specific, technical accounting knowledge. Experiments were conducted with students and managers, 817 participants in total. The purchasing decision involved making a choice between two brands (A and B) for a similar new machine in a production department; the selection of Brand B was the dependent variable (Choice B). The experiment used a 2×2×2×2 between-participants design: the three manipulated, independent variables are availability of Total Cost Information (TCO info), the Comprehensiveness of the information provided (Comprehensiveness), and the uptime of Brand B (Uptime B); Experience was a measured, fourth independent variable. Thus, there were 16 cells with different experimental conditions. This study did not consider incentives, and no information about reward structures related to this purchasing task was provided. We found that decision-makers adjusted their strategy depending on the situation. When few attributes were included in the TCO measure (Comprehensiveness is low), we found that students put more weight on the attribute that was not included in the TCO measure, consistent with Hypothesis 1. For practitioners this condition did not yield a statistically significant result. When more attributes were included in the overall TCO measure (Comprehensiveness is high), we found that practitioners put less weight on the missing attribute, consistent with Hypothesis 2. However, students still put more weight on the missing attribute, contrary to Hypothesis 2. We also conducted further analyses by splitting the group of practitioners into more and less experienced subgroups. We found that the results for the less experienced subgroup resembled the students’ results more than the results of the more experienced subgroup. Taken together, these findings suggest that Experience is an important factor, and providing TCO information to experienced decision makers may lead them to put less emphasis on attributes that are not incorporated in the cost information. The remainder of this paper is structured as follows. In the next section, the background of this paper is introduced in more detail and our hypotheses are developed. Subsequently, the resea