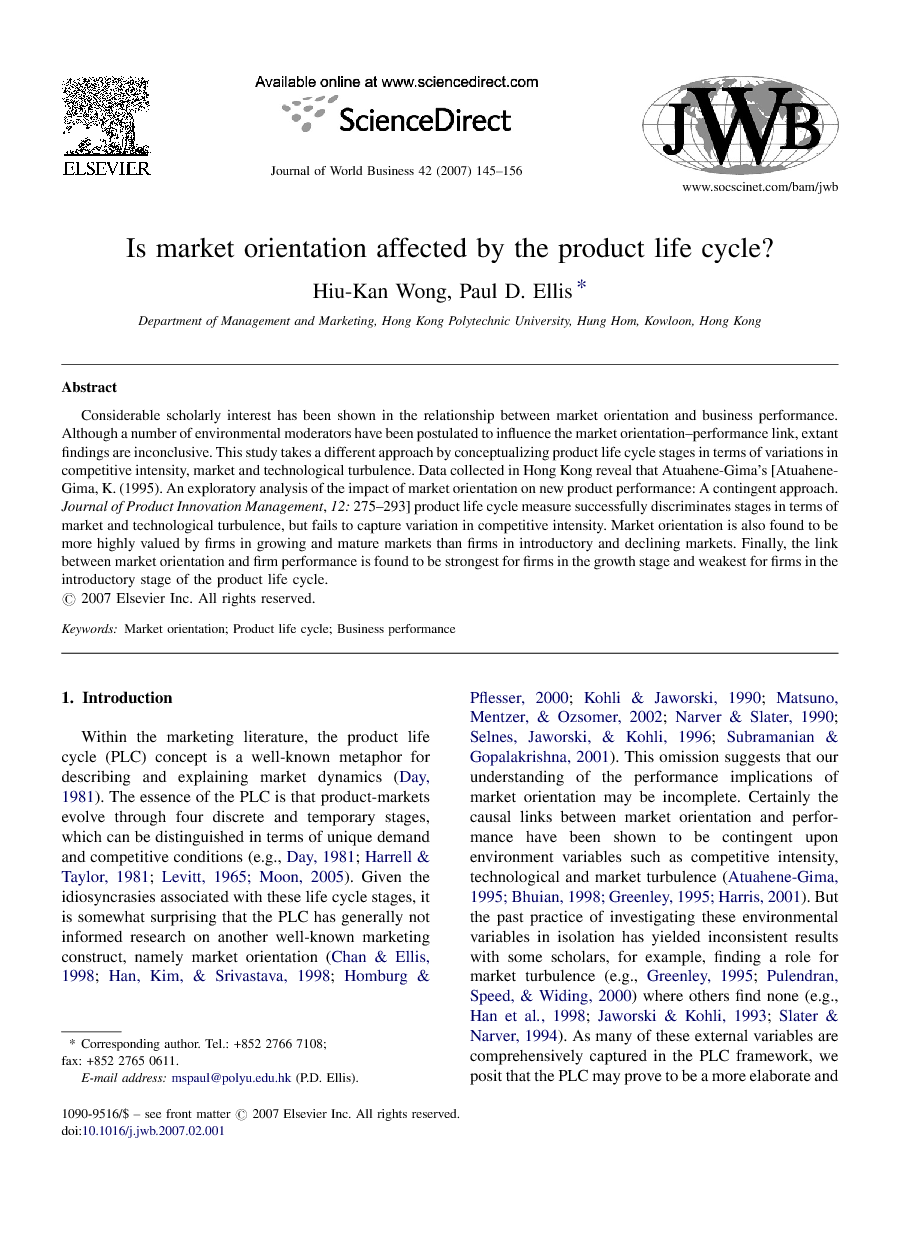 Considerable scholarly interest has been shown in the relationship between market orientation and business performance. Although a number of environmental moderators have been postulated to influence the market orientation–performance link, extant findings are inconclusive. This study takes a different approach by conceptualizing product life cycle stages in terms of variations in competitive intensity, market and technological turbulence. Data collected in Hong Kong reveal that Atuahene-Gima's [Atuahene-Gima, K. (1995). An exploratory analysis of the impact of market orientation on new product performance: A contingent approach. Journal of Product Innovation Management, 12: 275–293] product life cycle measure successfully discriminates stages in terms of market and technological turbulence, but fails to capture variation in competitive intensity. Market orientation is also found to be more highly valued by firms in growing and mature markets than firms in introductory and declining markets. Finally, the link between market orientation and firm performance is found to be strongest for firms in the growth stage and weakest for firms in the introductory stage of the product life cycle.

Within the marketing literature, the product life cycle (PLC) concept is a well-known metaphor for describing and explaining market dynamics (Day, 1981). The essence of the PLC is that product-markets evolve through four discrete and temporary stages, which can be distinguished in terms of unique demand and competitive conditions (e.g., Day, 1981; Harrell & Taylor, 1981; Levitt, 1965 and Moon, 2005). Given the idiosyncrasies associated with these life cycle stages, it is somewhat surprising that the PLC has generally not informed research on another well-known marketing construct, namely market orientation (Chan & Ellis, 1998; Han, Kim, & Srivastava, 1998; Homburg & Pflesser, 2000; Kohli & Jaworski, 1990; Matsuno, Mentzer, & Ozsomer, 2002; Narver & Slater, 1990; Selnes, Jaworski, & Kohli, 1996; Subramanian & Gopalakrishna, 2001). This omission suggests that our understanding of the performance implications of market orientation may be incomplete. Certainly the causal links between market orientation and performance have been shown to be contingent upon environment variables such as competitive intensity, technological and market turbulence (Atuahene-Gima, 1995, Bhuian, 1998, Greenley, 1995 and Harris, 2001). But the past practice of investigating these environmental variables in isolation has yielded inconsistent results with some scholars, for example, finding a role for market turbulence (e.g., Greenley, 1995; Pulendran, Speed, & Widing, 2000) where others find none (e.g., Han et al., 1998; Jaworski & Kohli, 1993; Slater & Narver, 1994). As many of these external variables are comprehensively captured in the PLC framework, we posit that the PLC may prove to be a more elaborate and appropriate concept useful for the simultaneous examination of multiple sources of extraneous influence. Consequently, the aim of this study is to examine the performance implications of market orientation during the different stages of the PLC.

Based on data collected from 292 Hong Kong–Chinese manufacturers, we conclude that market orientation is indeed affected by the PLC. Market orientation tends to be higher for firms in the middle stages (growth and maturity) of the life cycle than for firms in new or declining markets. We also find that a market orientation will have the greatest impact on performance during the turbulent growth stage of the PLC and the least impact during the introductory stage. These findings have implications for both researchers and managers. 6.1. Implications for researchers We originally proposed that inconsistencies evident in past work examining the independent effects of competitive intensity, market, and technological turbulence may be partly resolved by considering the combined effects of these environmental characteristics via the metaphor of the PLC. The results of this study reveal that the PLC is useful in this regard. Chiefly, the findings show that the various life cycle stages can be meaningfully classified in terms of market and technological turbulence (both are highest during growth stages and lowest in decline stages), with concomitant implications for market orientation. The implication for researchers interested in environmental moderators of the classic market orientation–performance link is clear: the PLC matters. In this regard the findings of this study add weight to, and extend, the original work of Atuahene-Gima (1995). However, the data failed to support the hypothesis that competitive intensity would be highest (lowest) during the mature (introductory) stages. This lack of a result might be attributable to the small number of respondents identified in the introductory stage of the PLC. The mean competitive intensity score for this group of firms is the lowest of the sample, as predicted, but the study may lack the statistical power required to confirm a true effect size. Follow-up studies would need to take care to ensure larger numbers in all groups. Another plausible explanation for this lack of a finding is measurement error. In the Atuahene-Gima (1995) scale, a mature market is defined as one in which the “competitive structure of the market is fairly stable” (cf. Day, 1981). This definition possibly fails to fully capture the idea that a mature market is saturated and characterized by a proliferation of increasingly differentiated products, intense price competition, and falling profits (Levitt, 1965). As such, respondents in this study operating in growing or declining markets may have inadvertently classified themselves as operating in mature markets (and this may explain why this group was three times larger than any other group). Future surveys would do well to provide expanded definitions of each stage and to particularly signal the price-based competition that is a hallmark of mature markets. Care also needs to be taken to ensure that PLC measures are sufficiently discriminated from environmental traits. In this regard Atuahene-Gima's (1995) scale may not be ideal as it relies on terminology (e.g., in describing the growth stage) reminiscent of technological turbulence. These two limitations notwithstanding, the study makes an important and original contribution to the multinational literature on market orientation moderators. None of the three environmental variables was found to independently moderate the market orientation–performance link, a finding consistent with other research (Han et al., 1998; Jaworski & Kohli, 1993; Kwon & Hu, 2000; Subramanian & Gopalakrishna, 2001). Yet, examined together via the PLC framework, a moderating effect was observed. Three recent meta-analyses failed to consider any role for the PLC in their surveys of extant market orientation research (Cano, Carrillat, & Jaramillo, 2004; Ellis, 2006 and Kirca et al., 2005). Yet, this and Atuahene-Gima's (1995) studies suggest that the PLC offers untapped opportunities for further work. A good starting point would be to explicate the conceptual links between life cycle dynamics and different sources of uncertainty. In this study, market and technological turbulence were found to be highest in the growth stages. Yet, each environmental trait offers dissimilar implications for marketing managers as outlined by Kohli and Jaworski (1990). Does it follow that a market orientation will be valued more in a growth stage characterized by high market turbulence and relatively low technological turbulence? Another question concerns the causal link between PLC and market orientation. One implication arising from this study is that a firm's market orientation is contingent upon the PLC. Might the reverse also be true? If the time element of the life cycle is a proxy for all the marketing decisions made by firms in a market, then the PLC might be more properly viewed as a dependent variable (Enis et al., 1977). It follows that market-oriented firms may be better at recycling their mature products back to the growth stage by adopting repositioning strategies that change the way customers categorize their products (Moon, 2005). These untested ideas also hint at implications for managers.