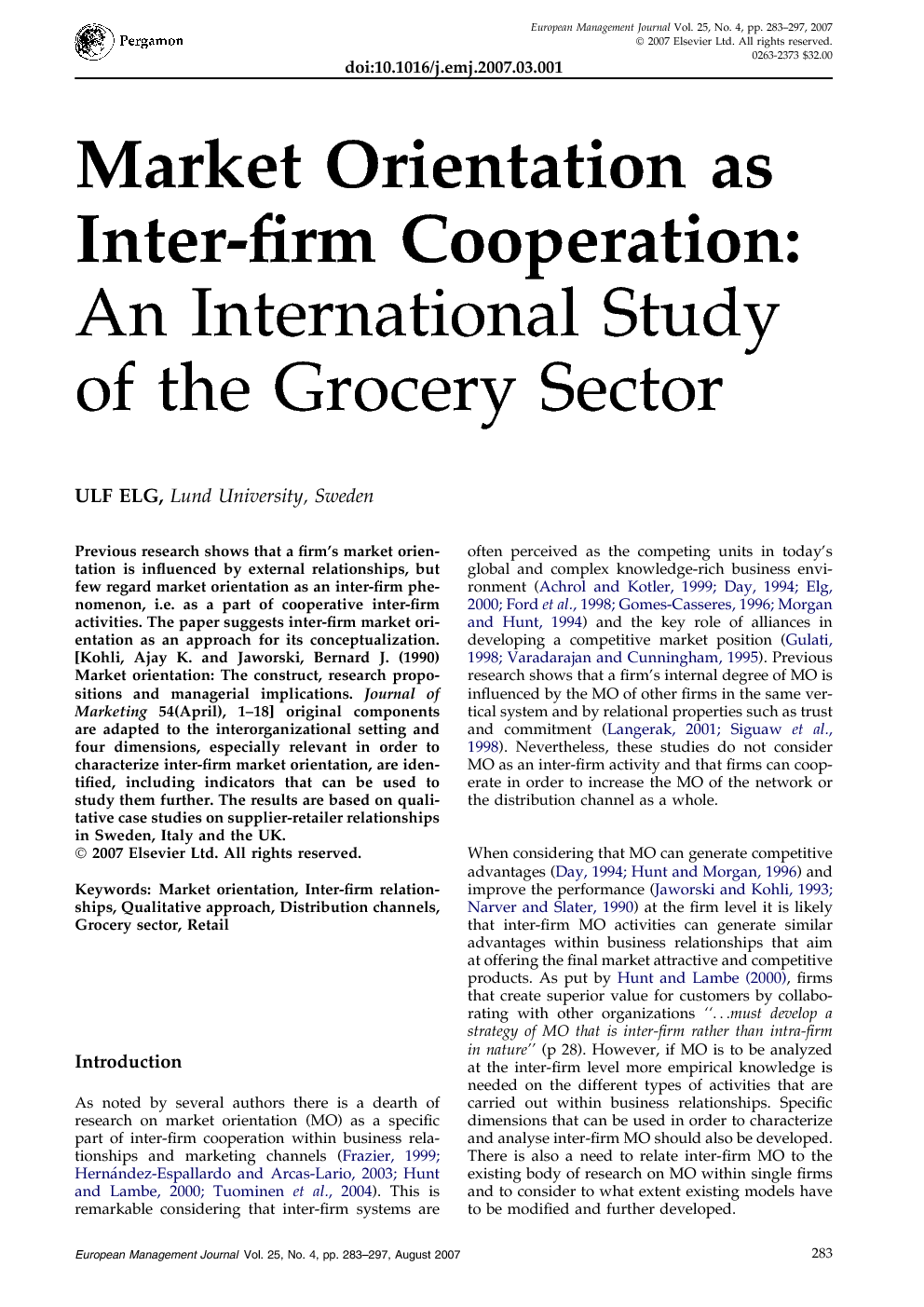 As noted by several authors there is a dearth of research on market orientation (MO) as a specific part of inter-firm cooperation within business relationships and marketing channels (Frazier, 1999, Hernández-Espallardo and Arcas-Lario, 2003, Hunt and Lambe, 2000 and Tuominen et al., 2004). This is remarkable considering that inter-firm systems are often perceived as the competing units in today’s global and complex knowledge-rich business environment (Achrol and Kotler, 1999, Day, 1994, Elg, 2000, Ford et al., 1998, Gomes-Casseres, 1996 and Morgan and Hunt, 1994) and the key role of alliances in developing a competitive market position (Gulati, 1998 and Varadarajan and Cunningham, 1995). Previous research shows that a firm’s internal degree of MO is influenced by the MO of other firms in the same vertical system and by relational properties such as trust and commitment (Langerak, 2001 and Siguaw et al., 1998). Nevertheless, these studies do not consider MO as an inter-firm activity and that firms can cooperate in order to increase the MO of the network or the distribution channel as a whole. When considering that MO can generate competitive advantages (Day, 1994 and Hunt and Morgan, 1996) and improve the performance (Jaworski and Kohli, 1993 and Narver and Slater, 1990) at the firm level it is likely that inter-firm MO activities can generate similar advantages within business relationships that aim at offering the final market attractive and competitive products. As put by Hunt and Lambe (2000), firms that create superior value for customers by collaborating with other organizations “…must develop a strategy of MO that is inter-firm rather than intra-firm in nature” (p 28). However, if MO is to be analyzed at the inter-firm level more empirical knowledge is needed on the different types of activities that are carried out within business relationships. Specific dimensions that can be used in order to characterize and analyse inter-firm MO should also be developed. There is also a need to relate inter-firm MO to the existing body of research on MO within single firms and to consider to what extent existing models have to be modified and further developed. This paper investigates inter-firm MO within retailer-manufacturer relationships, inter-firm MO referring to activities performed in cooperation between independent companies in order to respond to market forces (Elg, 2002). The purpose is to increase the understanding of inter-firm MO as an empirical phenomenon and to identify dimensions that can be used to systematically characterize inter-firm MO within interorganizational relationships. The study investigates the role that MO can have in inter-firm relationships more generally and how relationships can effectively incorporate market signals. It shows that there are different types of inter-firm MO depending on external and relational conditions. It was considered suitable to study distribution channels because they represent an inter-firm system that is explicitly related to the demands of a final market. The notion of competing inter-firm systems has also been stressed in previous studies on distribution channels ( Gadde and Håkansson, 1992 and Stern et al., 1996). A qualitative study of inter-firm cooperation between food companies in Sweden, the UK and Italy was conducted. The markets were chosen because of their structural differences. For example, both in the UK and Sweden they were dominated by a few very powerful retailers, whereas the Italian market was much more fragmented. Structural differences were expected to influence the character of inter-firm MO and a study of these three markets would reveal different patterns.

This paper shows that MO can be a significant part in inter-firm cooperation, and that there are differences between relationships concerning the character of inter-firm MO. The study identified four key dimensions that can be used to systematically categorize inter-firm MO within different relationships. It also indicates that the external context influences the character and degree of inter-firm MO. The Italian market was the most fragmented one and relationships were dominated by competition, whereas the UK market was more concentrated and relationships were more oriented towards cooperation. Based on the results, it appears that inter-firm MO will become more intense, comprehensive, have a broader focus and be more proactive on more concentrated and integrated markets. The results also imply that a high degree of stability and oligopolistic market conditions may reduce the incentives to drive inter-firm MO within relationships between suppliers and retailers. In the introduction it was argued that there is a need to assess the relevance of existing MO models on the inter-firm level and that new dimensions and indicators may be needed in order to study inter-firm MO. This study suggests that the original MO components introduced by Kohli and Jaworski (1990) are general enough to fit the inter-firm level as well. However, some of the introduced MO dimensions have not been considered in previous research. One is how MO activities are driven, and whether any actor has the power and the incentives to initiate joint activities. It was also found that whether inter-firm MO had a strategic role has important implications in the sence that it may decide whether the value chain will be able to capture future needs and consumer segments or not. The findings have implications for intra-firm MO as well. The paper shows that there are variations between distribution channels concerning the scope of inter-firm MO. In the light of the broad range of issues and tasks that have to be managed by a channel, this is explainable. However, it may also be fruitful to consider the scope of the MO activities when studying them within the single firm. Especially when considering that marketing literature often stresses that the firm’s marketing strategy needs to be a guide for all employees and incorporated in all activities within the organization. The study further implies that it is not sufficient to measure the degree of MO based on Kohli and Jaworski’s or Narver and Slater’s three components. In fact, previous research may have been too focused on measuring the quantity and degree of MO without really considering the use or the quality of the activities in relation to the firms’ strategic focus and capability or whether the information is transferred to relevant levels and functions within the firm. This may also explain why previous studies have offered contradictory and to some extent puzzling results about the link between MO and performance (Langerak, 2003). As a whole, the study illustrates that inter-firm MO is not an isolated phenomena. It is related to the parties’ general propensity to develop long-term relationships on a personal as well as an organizational level. It also suggests that we need to study inter-firm MO on several network levels in order to get a comprehensive view. This paper has discussed vertical relationships, but inter-firm MO is also likely to have a significant role within, for example, inter-market and customer opportunity networks (Achrol and Kotler, 1999). From a managerial perspective, the study shows that external partner firms can be a significant resource in developing a MO. If inter-firm MO activities are to become a significant strategic resource, the support of a cooperative relationship atmosphere is required. The UK especially stressed the personal level and the need to develop information systems between firms and routines for gathering and disseminating information and for jointly developing adequate market responses. The UK also suggests that powerful retailers may be a central driving force in the development of an inter-firm MO. Still, if all necessary preconditions do not exist, a firm may still initiate inter-firm MO activities but they should be limited to less complex tasks such as a marketing campaign or the development of a certain product.