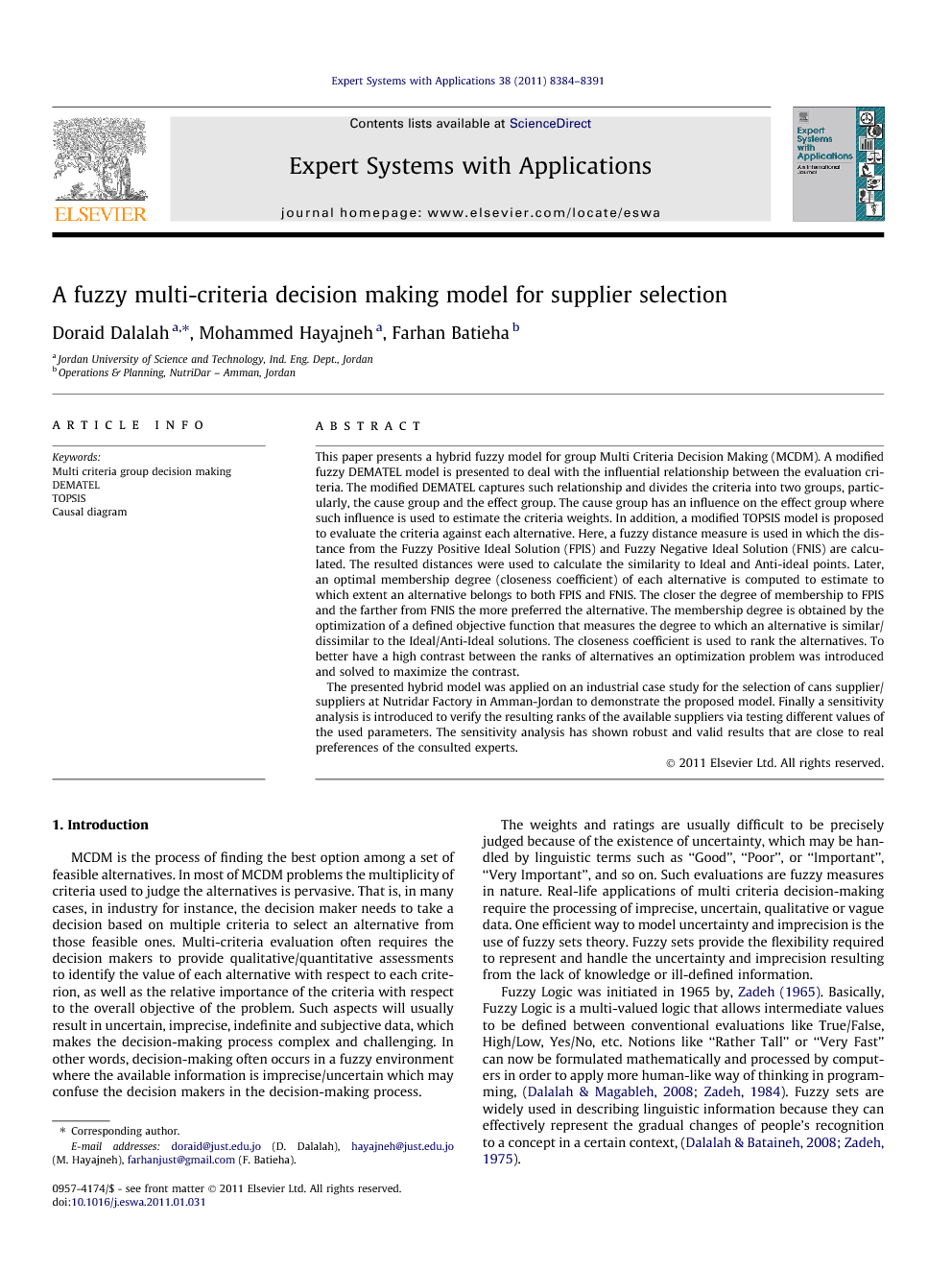 This paper presents a hybrid fuzzy model for group Multi Criteria Decision Making (MCDM). A modified fuzzy DEMATEL model is presented to deal with the influential relationship between the evaluation criteria. The modified DEMATEL captures such relationship and divides the criteria into two groups, particularly, the cause group and the effect group. The cause group has an influence on the effect group where such influence is used to estimate the criteria weights. In addition, a modified TOPSIS model is proposed to evaluate the criteria against each alternative. Here, a fuzzy distance measure is used in which the distance from the Fuzzy Positive Ideal Solution (FPIS) and Fuzzy Negative Ideal Solution (FNIS) are calculated. The resulted distances were used to calculate the similarity to Ideal and Anti-ideal points. Later, an optimal membership degree (closeness coefficient) of each alternative is computed to estimate to which extent an alternative belongs to both FPIS and FNIS. The closer the degree of membership to FPIS and the farther from FNIS the more preferred the alternative. The membership degree is obtained by the optimization of a defined objective function that measures the degree to which an alternative is similar/dissimilar to the Ideal/Anti-Ideal solutions. The closeness coefficient is used to rank the alternatives. To better have a high contrast between the ranks of alternatives an optimization problem was introduced and solved to maximize the contrast. The presented hybrid model was applied on an industrial case study for the selection of cans supplier/suppliers at Nutridar Factory in Amman-Jordan to demonstrate the proposed model. Finally a sensitivity analysis is introduced to verify the resulting ranks of the available suppliers via testing different values of the used parameters. The sensitivity analysis has shown robust and valid results that are close to real preferences of the consulted experts.

MCDM is the process of finding the best option among a set of feasible alternatives. In most of MCDM problems the multiplicity of criteria used to judge the alternatives is pervasive. That is, in many cases, in industry for instance, the decision maker needs to take a decision based on multiple criteria to select an alternative from those feasible ones. Multi-criteria evaluation often requires the decision makers to provide qualitative/quantitative assessments to identify the value of each alternative with respect to each criterion, as well as the relative importance of the criteria with respect to the overall objective of the problem. Such aspects will usually result in uncertain, imprecise, indefinite and subjective data, which makes the decision-making process complex and challenging. In other words, decision-making often occurs in a fuzzy environment where the available information is imprecise/uncertain which may confuse the decision makers in the decision-making process. The weights and ratings are usually difficult to be precisely judged because of the existence of uncertainty, which may be handled by linguistic terms such as “Good”, “Poor”, or “Important”, “Very Important”, and so on. Such evaluations are fuzzy measures in nature. Real-life applications of multi criteria decision-making require the processing of imprecise, uncertain, qualitative or vague data. One efficient way to model uncertainty and imprecision is the use of fuzzy sets theory. Fuzzy sets provide the flexibility required to represent and handle the uncertainty and imprecision resulting from the lack of knowledge or ill-defined information. Fuzzy Logic was initiated in 1965 by, Zadeh (1965). Basically, Fuzzy Logic is a multi-valued logic that allows intermediate values to be defined between conventional evaluations like True/False, High/Low, Yes/No, etc. Notions like “Rather Tall” or “Very Fast” can now be formulated mathematically and processed by computers in order to apply more human-like way of thinking in programming, (Dalalah and Magableh, 2008 and Zadeh, 1984). Fuzzy sets are widely used in describing linguistic information because they can effectively represent the gradual changes of people’s recognition to a concept in a certain context, (Dalalah and Bataineh, 2008 and Zadeh, 1975). The study in Lin and Wu (2008) develops a fuzzy DEMATEL method (The Decision-Making Trial and Evaluation Laboratory), a very popular method in Japan, which applies matrices and digraphs for visualizing the structure of complicated causal relationships. DEMATEL involves group decision-making which consists of gathering ideas and then analyzing the cause–effect relationship of complex problems. The DEMATEL, originated from the Geneva Research Centre of the Battelle Memorial Institute (Fontela and Gabus, 1976 and Gabus and Fontela, 1973), aimed at the fragmented and antagonistic phenomena of world societies and search for integrated solutions. It is useful for visualizing the structure of complicated causal relationships with matrices or digraphs. Hence, the DEMATEL model can convert the relationship between the causes and effects of criteria into an intelligible structural model of the system. In our study, we will modify the DEMATEL model to handle fuzzy rating and evaluations as will be illustrated shortly. A survey of the MCDM methods has been presented by, Hwang and Yoon (1981). The Technique for Order Performance by Similarity to Ideal Solution (TOPSIS), one of the known classical MCDM methods, was first developed in this survey. It is based on the concept that the chosen alternative should have the shortest distance from the Positive Ideal Solution (PIS), i.e., the solution that maximizes the benefit criteria; and the farthest from the Negative Ideal Solution (NIS), i.e., the solution that minimizes the benefit criteria (Benitez et al., 2007 and Wang and Elhag, 2006). In short, the positive ideal solution is composed of all best values attainable of criteria, whereas the negative ideal solution consists of all worst values, (Saghafian and Reza Hejazi, 2005 and Wang, 2008). In our study, we will modify the TOPSIS model to handle fuzzy rating, weights and evaluations as will be illustrated shortly.

In this paper, a hybrid fuzzy multi-criteria group decision making model has been developed based on fuzzy set theory to efficiently deal with the ambiguity of the decision making problems in practical cases. A modified fuzzy DEMATEL model is presented to deal with the influential relationship between the evaluation criteria and to identify their causal relationship which was used to estimate the criteria weights. A modified TPSIS model is also proposed to evaluate the criteria against each alternative. In our modified model a fuzzy distance measure is presented in which the distance from the Fuzzy Positive Idea Solution (FPIS) and the Fuzzy Negative Ideal Solution (FNIS) are calculated to find the similarities of the available alternatives. In this study, an optimal membership degree of each alternative is computed to estimate to which extent an alternative belongs to both FPIS and FNIS. The membership degree (Closeness Coefficient) is obtained by the optimization of a defined objective function that measures the degree to which an alternative is similar/dissimilar to the Ideal/Anti-Ideal solutions. To better have a higher contrast between the ranks of the alternatives, an optimization problem is also introduced to solve for the maximum contrast. The presented hybrid model was applied on an industrial case study for the selection of cans suppliers at Nutridar Factory in Amman-Jordan. In conclusion, it was noticed that the hybrid model has a good potential to deal with linguistic and fuzzy evaluations with no need to strictly determine the criteria weights. Contrary to traditional approaches, in this study, the weights are calculated from the modified DEMATEL model which is an improvement over the direct evaluation. The presented hybrid model clarifies the complex influential interactions between the criteria and transforms these interactions into a visible structural model. The visible structural model (casual diagram) makes it easy to capture the core of the problem with the right criteria weights; consequently efficient decision can be made. Moreover, comparing the alternatives via the introduced similarity measure provides a comparable normalized scale that differs from direct distance measure of the fuzzy ratings. The sensitivity analysis could demonstrate the robustness of the model, that is, any change in α value does not change the ranks of the suppliers, rather, it makes the decision making process easier. In addition, the sensitivity analysis helps build a visual perception of the rank of each alternative which aids in categorizing the suppliers into different groups. Finally, the proposed hybrid model can be easily programmed, implemented and applied to different decision making problems such as manufacturing, environmental engineering, financial analysis, social science, material selection and many other decision making problems in which the linguistic evaluation may be used.