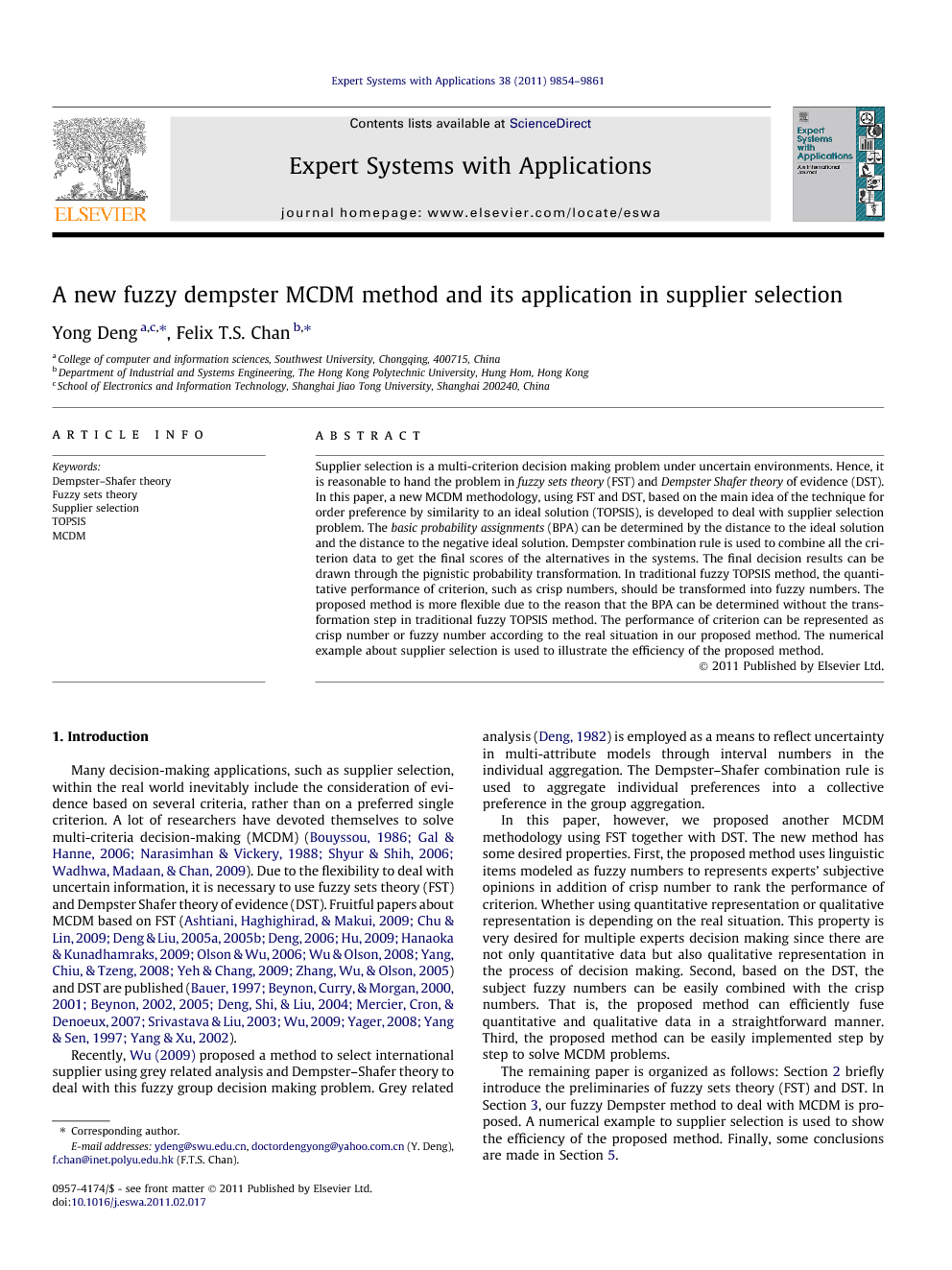 Supplier selection is a multi-criterion decision making problem under uncertain environments. Hence, it is reasonable to hand the problem in fuzzy sets theory (FST) and Dempster Shafer theory of evidence (DST). In this paper, a new MCDM methodology, using FST and DST, based on the main idea of the technique for order preference by similarity to an ideal solution (TOPSIS), is developed to deal with supplier selection problem. The basic probability assignments (BPA) can be determined by the distance to the ideal solution and the distance to the negative ideal solution. Dempster combination rule is used to combine all the criterion data to get the final scores of the alternatives in the systems. The final decision results can be drawn through the pignistic probability transformation. In traditional fuzzy TOPSIS method, the quantitative performance of criterion, such as crisp numbers, should be transformed into fuzzy numbers. The proposed method is more flexible due to the reason that the BPA can be determined without the transformation step in traditional fuzzy TOPSIS method. The performance of criterion can be represented as crisp number or fuzzy number according to the real situation in our proposed method. The numerical example about supplier selection is used to illustrate the efficiency of the proposed method.

Many decision-making applications, such as supplier selection, within the real world inevitably include the consideration of evidence based on several criteria, rather than on a preferred single criterion. A lot of researchers have devoted themselves to solve multi-criteria decision-making (MCDM) (Bouyssou, 1986, Gal and Hanne, 2006, Narasimhan and Vickery, 1988, Shyur and Shih, 2006 and Wadhwa et al., 2009). Due to the flexibility to deal with uncertain information, it is necessary to use fuzzy sets theory (FST) and Dempster Shafer theory of evidence (DST). Fruitful papers about MCDM based on FST (Ashtiani et al., 2009, Chu and Lin, 2009, Deng and Liu, 2005a, Deng and Liu, 2005b, Deng, 2006, Hu, 2009, Hanaoka and Kunadhamraks, 2009, Olson and Wu, 2006, Wu and Olson, 2008, Yang et al., 2008, Yeh and Chang, 2009 and Zhang et al., 2005) and DST are published (Bauer, 1997, Beynon et al., 2000, Beynon et al., 2001, Beynon, 2002, Beynon, 2005, Deng et al., 2004, Mercier et al., 2007, Srivastava and Liu, 2003, Wu, 2009, Yager, 2008, Yang and Sen, 1997 and Yang and Xu, 2002). Recently, Wu (2009) proposed a method to select international supplier using grey related analysis and Dempster–Shafer theory to deal with this fuzzy group decision making problem. Grey related analysis (Deng, 1982) is employed as a means to reflect uncertainty in multi-attribute models through interval numbers in the individual aggregation. The Dempster–Shafer combination rule is used to aggregate individual preferences into a collective preference in the group aggregation. In this paper, however, we proposed another MCDM methodology using FST together with DST. The new method has some desired properties. First, the proposed method uses linguistic items modeled as fuzzy numbers to represents experts’ subjective opinions in addition of crisp number to rank the performance of criterion. Whether using quantitative representation or qualitative representation is depending on the real situation. This property is very desired for multiple experts decision making since there are not only quantitative data but also qualitative representation in the process of decision making. Second, based on the DST, the subject fuzzy numbers can be easily combined with the crisp numbers. That is, the proposed method can efficiently fuse quantitative and qualitative data in a straightforward manner. Third, the proposed method can be easily implemented step by step to solve MCDM problems. The remaining paper is organized as follows: Section 2 briefly introduce the preliminaries of fuzzy sets theory (FST) and DST. In Section 3, our fuzzy Dempster method to deal with MCDM is proposed. A numerical example to supplier selection is used to show the efficiency of the proposed method. Finally, some conclusions are made in Section 5.

In this paper, a new MCDM method based on DST is proposed. It is shown that the new method can deal with MCDM in an efficient manner. We use a supplier selection example to illustate the use of the proposed method. It can easily be applied to other MCDM. In the future, the conflict data fusion alogrithm will be taken into consideration since that the DM may conflict with each other DM and the criterion in MCDM may conflict with each other criterion. If highly conflicting evidence are collected, the classical DS combination rule will get uncorrect results. Hence, it is necessary to efficiently handle conflict evidence in the decision making process (Guo et al., 2006, Lefevre, 2002 and Murphy, 2000).