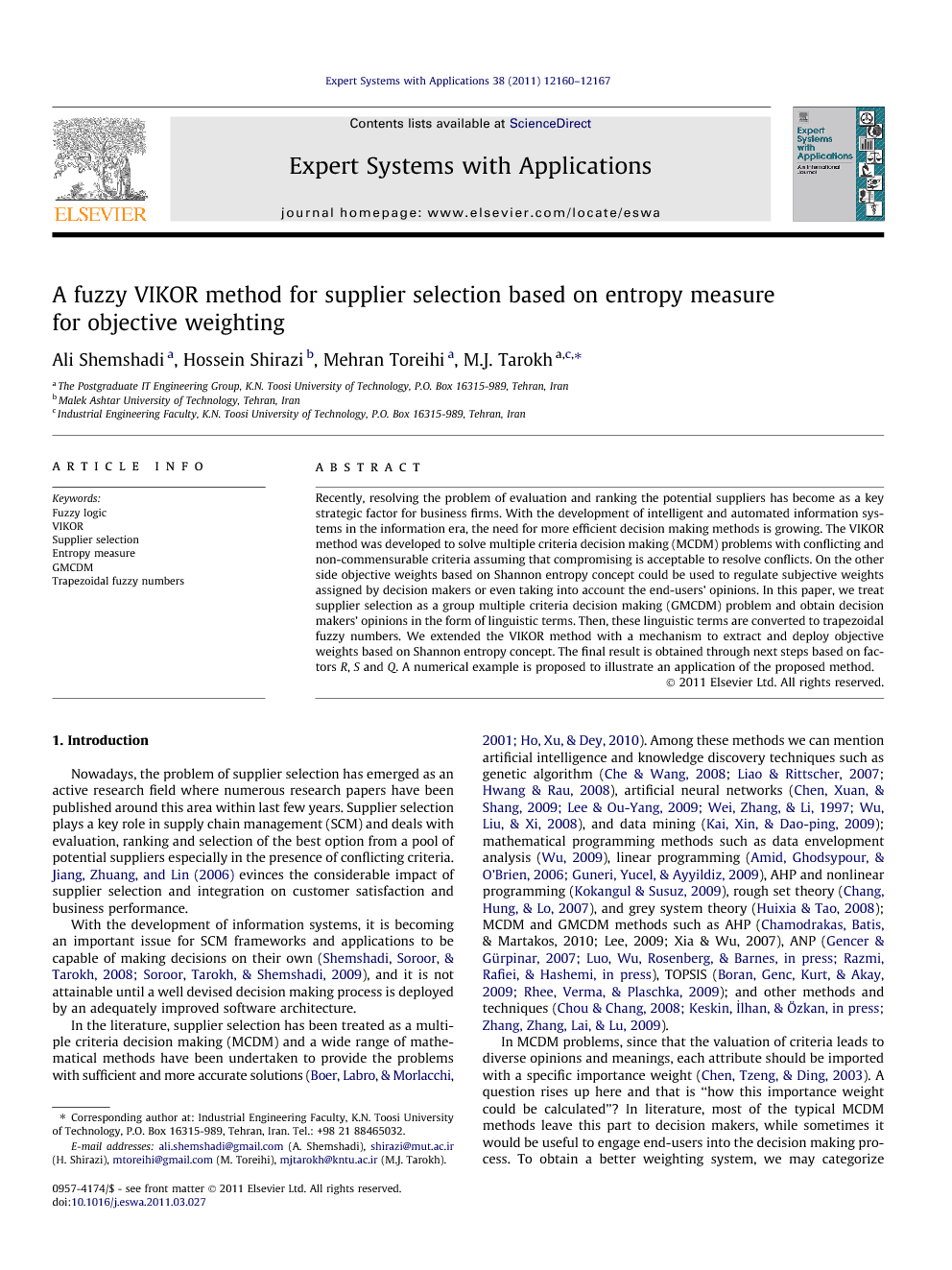 Recently, resolving the problem of evaluation and ranking the potential suppliers has become as a key strategic factor for business firms. With the development of intelligent and automated information systems in the information era, the need for more efficient decision making methods is growing. The VIKOR method was developed to solve multiple criteria decision making (MCDM) problems with conflicting and non-commensurable criteria assuming that compromising is acceptable to resolve conflicts. On the other side objective weights based on Shannon entropy concept could be used to regulate subjective weights assigned by decision makers or even taking into account the end-users’ opinions. In this paper, we treat supplier selection as a group multiple criteria decision making (GMCDM) problem and obtain decision makers’ opinions in the form of linguistic terms. Then, these linguistic terms are converted to trapezoidal fuzzy numbers. We extended the VIKOR method with a mechanism to extract and deploy objective weights based on Shannon entropy concept. The final result is obtained through next steps based on factors R, S and Q. A numerical example is proposed to illustrate an application of the proposed method.

Nowadays, the problem of supplier selection has emerged as an active research field where numerous research papers have been published around this area within last few years. Supplier selection plays a key role in supply chain management (SCM) and deals with evaluation, ranking and selection of the best option from a pool of potential suppliers especially in the presence of conflicting criteria. Jiang, Zhuang, and Lin (2006) evinces the considerable impact of supplier selection and integration on customer satisfaction and business performance. With the development of information systems, it is becoming an important issue for SCM frameworks and applications to be capable of making decisions on their own (Shemshadi et al., 2008 and Soroor et al., 2009), and it is not attainable until a well devised decision making process is deployed by an adequately improved software architecture. In the literature, supplier selection has been treated as a multiple criteria decision making (MCDM) and a wide range of mathematical methods have been undertaken to provide the problems with sufficient and more accurate solutions (Boer et al., 2001 and Ho et al., 2010). Among these methods we can mention artificial intelligence and knowledge discovery techniques such as genetic algorithm (Che & Wang, 2008; Liao & Rittscher, 2007; Hwang & Rau, 2008), artificial neural networks (Chen et al., 2009, Lee and Ou-Yang, 2009, Wei et al., 1997 and Wu et al., 2008), and data mining (Kai, Xin, & Dao-ping, 2009); mathematical programming methods such as data envelopment analysis (Wu, 2009), linear programming (Amid et al., 2006 and Guneri et al., 2009), AHP and nonlinear programming (Kokangul & Susuz, 2009), rough set theory (Chang, Hung, & Lo, 2007), and grey system theory (Huixia & Tao, 2008); MCDM and GMCDM methods such as AHP (Chamodrakas et al., 2010, Lee, 2009 and Xia and Wu, 2007), ANP (Gencer and Gürpinar, 2007, Luo et al., in press and Razmi et al., in press), TOPSIS (Boran et al., 2009 and Rhee et al., 2009); and other methods and techniques (Chou and Chang, 2008, Keskin et al., in press and Zhang et al., 2009). In MCDM problems, since that the valuation of criteria leads to diverse opinions and meanings, each attribute should be imported with a specific importance weight (Chen, Tzeng, & Ding, 2003). A question rises up here and that is “how this importance weight could be calculated”? In literature, most of the typical MCDM methods leave this part to decision makers, while sometimes it would be useful to engage end-users into the decision making process. To obtain a better weighting system, we may categorize weighting methods into two categories: subjective methods and objective methods (Wang & Lee, 2009). While subjective methods determine weights solely based on the preference or judgments of decision makers, objective methods utilize mathematical models, such as entropy method or multiple objective programming, automatically without considering the decision makers’ preferences. The approach with objective weighting is particularly applicable for situations where reliable subjective weights cannot be obtained (Deng, Yeh, & Willis, 2000). On the other side, new researches entail new MCDM approaches such as VIKOR. Recently, due to its characteristics and capabilities, the VIKOR method has been considerably undertaken by researchers to provide decision making problems, especially in the field of supplier selection, with more accurate solutions. This includes deploying VIKOR either solely (Chiang, 2009 and Chen and Wang, 2009) or along with other mathematical or MCDM approaches such as AHP (Liu and Yan,, 2007 and Wu et al., 2010), ANP (Liou & Chuang, in press), rough sets (Jiagang and Wei, 2008 and Zhou and Tian, 2008), and artificial neural networks (Chen & Li, 2008). In this article, we provide an introduction to the VIKOR method, Fuzzy Logic and the Shannon Entropy respectively at sections 2, 3 and 4. We are going to propose the new method in Section 5 while Section 6 provides it with a numerical example. Section 7 concludes the paper.

With the today’s highly competitive business environment, firms have to work hard and harder to reinforce their competitive advantages against their rivals in market. Supply chain management is one of the most important fields that affect manufacturers’ performance. Many researchers and practitioners have focused their work on this area and deployed a wide range of scientific and technical techniques to enhance efficiency and flexibility of the supply networks. Supplier selection is considered as a key problem that is generally considered as a MCDM or GMCDM problem and recently has attracted many researchers to it. VIKOR is a helpful tool in multi-criteria decision making, the obtained compromise solution could be accepted by the decision makers because it provides a maximum group utility (represented by min S,) of the majority, and a minimum of the individual regret (represented by min R) of the opponent. In this article we proposed an extension of VIKOR that supports subjective and objective weights, where subjective weights are obtained directly from the decision makers while objective weights are determined based on Shannon entropy. Including end-users’ opinions will be useful especially in the case of mass-customization or customer-oriented business firms. Finally we proposed a numerical example to illustrate an application of the proposed method.