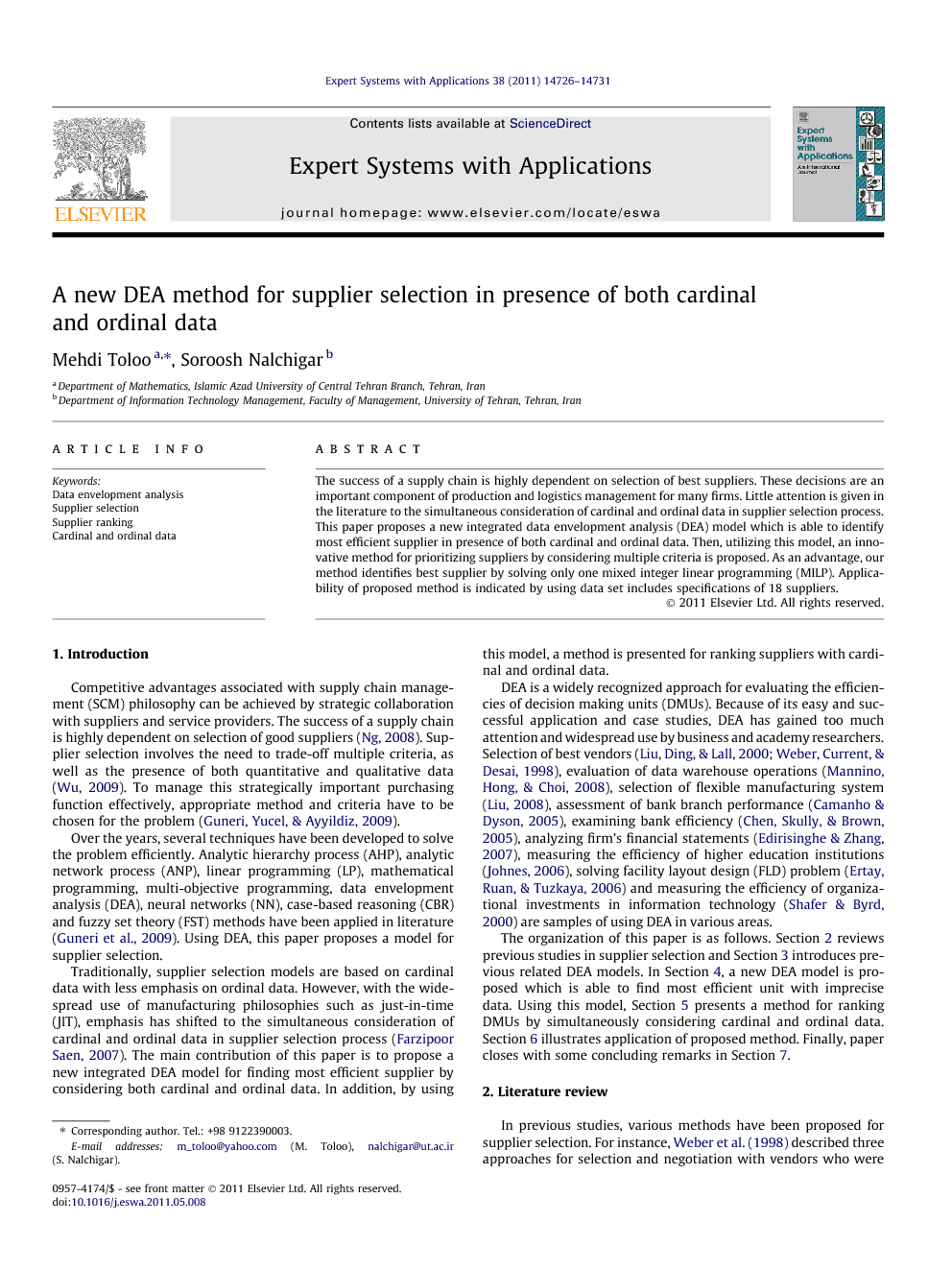 The success of a supply chain is highly dependent on selection of best suppliers. These decisions are an important component of production and logistics management for many firms. Little attention is given in the literature to the simultaneous consideration of cardinal and ordinal data in supplier selection process. This paper proposes a new integrated data envelopment analysis (DEA) model which is able to identify most efficient supplier in presence of both cardinal and ordinal data. Then, utilizing this model, an innovative method for prioritizing suppliers by considering multiple criteria is proposed. As an advantage, our method identifies best supplier by solving only one mixed integer linear programming (MILP). Applicability of proposed method is indicated by using data set includes specifications of 18 suppliers.

Competitive advantages associated with supply chain management (SCM) philosophy can be achieved by strategic collaboration with suppliers and service providers. The success of a supply chain is highly dependent on selection of good suppliers (Ng, 2008). Supplier selection involves the need to trade-off multiple criteria, as well as the presence of both quantitative and qualitative data (Wu, 2009). To manage this strategically important purchasing function effectively, appropriate method and criteria have to be chosen for the problem (Guneri, Yucel, & Ayyildiz, 2009). Over the years, several techniques have been developed to solve the problem efficiently. Analytic hierarchy process (AHP), analytic network process (ANP), linear programming (LP), mathematical programming, multi-objective programming, data envelopment analysis (DEA), neural networks (NN), case-based reasoning (CBR) and fuzzy set theory (FST) methods have been applied in literature (Guneri et al., 2009). Using DEA, this paper proposes a model for supplier selection. Traditionally, supplier selection models are based on cardinal data with less emphasis on ordinal data. However, with the widespread use of manufacturing philosophies such as just-in-time (JIT), emphasis has shifted to the simultaneous consideration of cardinal and ordinal data in supplier selection process (Farzipoor Saen, 2007). The main contribution of this paper is to propose a new integrated DEA model for finding most efficient supplier by considering both cardinal and ordinal data. In addition, by using this model, a method is presented for ranking suppliers with cardinal and ordinal data. DEA is a widely recognized approach for evaluating the efficiencies of decision making units (DMUs). Because of its easy and successful application and case studies, DEA has gained too much attention and widespread use by business and academy researchers. Selection of best vendors (Liu et al., 2000 and Weber et al., 1998), evaluation of data warehouse operations (Mannino, Hong, & Choi, 2008), selection of flexible manufacturing system (Liu, 2008), assessment of bank branch performance (Camanho & Dyson, 2005), examining bank efficiency (Chen, Skully, & Brown, 2005), analyzing firm’s financial statements (Edirisinghe & Zhang, 2007), measuring the efficiency of higher education institutions (Johnes, 2006), solving facility layout design (FLD) problem (Ertay, Ruan, & Tuzkaya, 2006) and measuring the efficiency of organizational investments in information technology (Shafer & Byrd, 2000) are samples of using DEA in various areas. The organization of this paper is as follows. Section 2 reviews previous studies in supplier selection and Section 3 introduces previous related DEA models. In Section 4, a new DEA model is proposed which is able to find most efficient unit with imprecise data. Using this model, Section 5 presents a method for ranking DMUs by simultaneously considering cardinal and ordinal data. Section 6 illustrates application of proposed method. Finally, paper closes with some concluding remarks in Section 7.

Supplier selection, which is one of the most crucial components of production and logistics management, has a significant impact on various functional areas of business from procurement to production and delivery of the products to the end customer. To select the most efficient suppliers in the conditions that both ordinal and cardinal factors are present, a methodology was introduced in this study. Investigation of previous published researches indicates that SCM and the supplier (vendor) selection process have received considerable attention in literature. However, little attention is given to decisions on the appropriate selection of suppliers in existence of both cardinal and ordinal data. This paper proposed a new integrated DEA model for finding most efficient supplier with imprecise data. Using this model, decision maker is able to choose most efficient supplier by solving just one MILP. Consequently, by using this model, a method developed for ranking suppliers. Furthermore, another DEA model which is able to identify most BCC-efficient unit with imprecise data introduced in Appendix A. To provide some further insights, it is notable that the models developed in this paper are input-oriented, but can be extended to output-oriented. In addition, extending the application of proposed method to the analysis of other decision problems can be considered as a topic for future research.