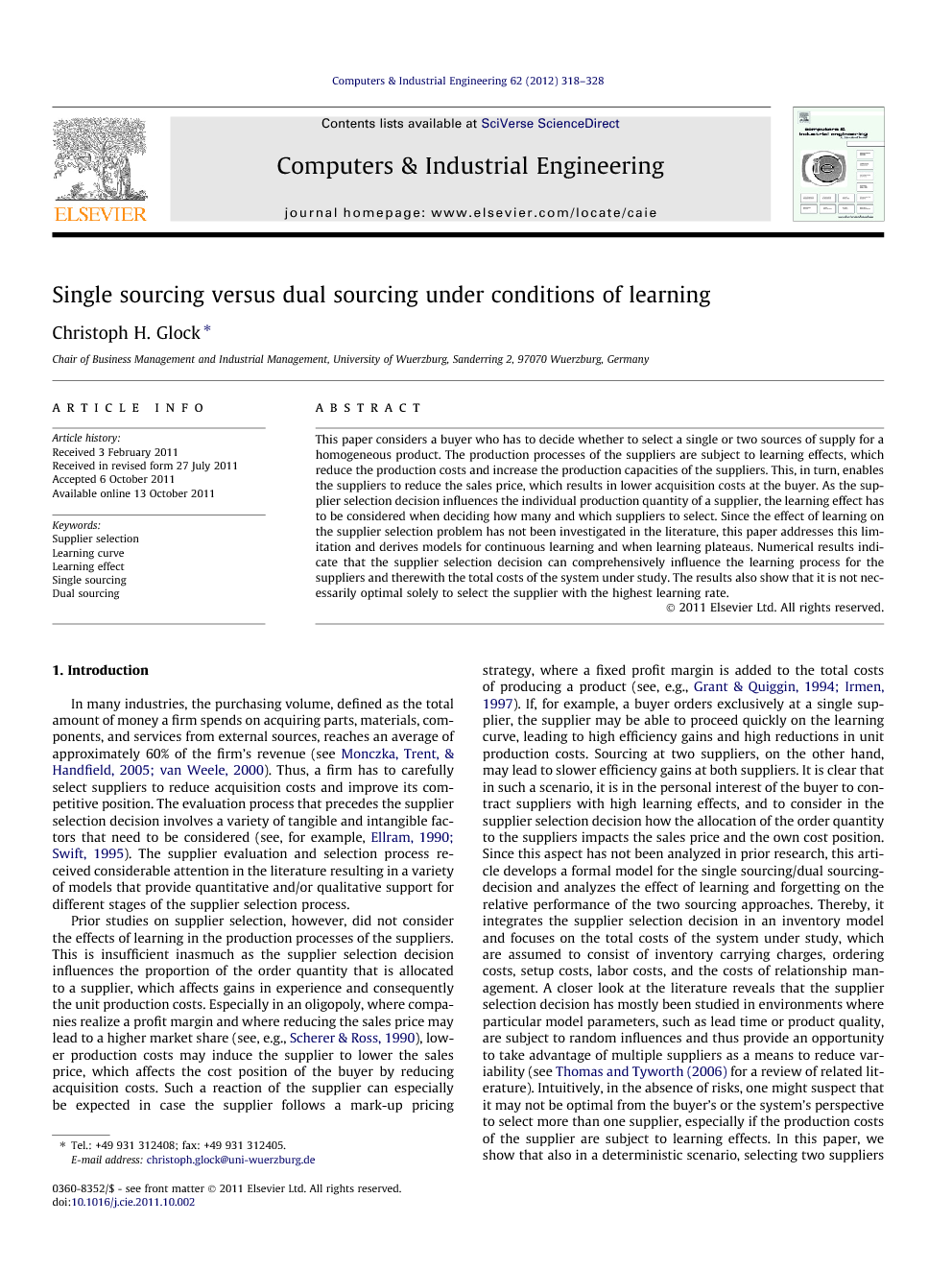 In many industries, the purchasing volume, defined as the total amount of money a firm spends on acquiring parts, materials, components, and services from external sources, reaches an average of approximately 60% of the firm’s revenue (see Monczka et al., 2005 and van Weele, 2000). Thus, a firm has to carefully select suppliers to reduce acquisition costs and improve its competitive position. The evaluation process that precedes the supplier selection decision involves a variety of tangible and intangible factors that need to be considered (see, for example, Ellram, 1990 and Swift, 1995). The supplier evaluation and selection process received considerable attention in the literature resulting in a variety of models that provide quantitative and/or qualitative support for different stages of the supplier selection process. Prior studies on supplier selection, however, did not consider the effects of learning in the production processes of the suppliers. This is insufficient inasmuch as the supplier selection decision influences the proportion of the order quantity that is allocated to a supplier, which affects gains in experience and consequently the unit production costs. Especially in an oligopoly, where companies realize a profit margin and where reducing the sales price may lead to a higher market share (see, e.g., Scherer & Ross, 1990), lower production costs may induce the supplier to lower the sales price, which affects the cost position of the buyer by reducing acquisition costs. Such a reaction of the supplier can especially be expected in case the supplier follows a mark-up pricing strategy, where a fixed profit margin is added to the total costs of producing a product (see, e.g., Grant and Quiggin, 1994 and Irmen, 1997). If, for example, a buyer orders exclusively at a single supplier, the supplier may be able to proceed quickly on the learning curve, leading to high efficiency gains and high reductions in unit production costs. Sourcing at two suppliers, on the other hand, may lead to slower efficiency gains at both suppliers. It is clear that in such a scenario, it is in the personal interest of the buyer to contract suppliers with high learning effects, and to consider in the supplier selection decision how the allocation of the order quantity to the suppliers impacts the sales price and the own cost position. Since this aspect has not been analyzed in prior research, this article develops a formal model for the single sourcing/dual sourcing-decision and analyzes the effect of learning and forgetting on the relative performance of the two sourcing approaches. Thereby, it integrates the supplier selection decision in an inventory model and focuses on the total costs of the system under study, which are assumed to consist of inventory carrying charges, ordering costs, setup costs, labor costs, and the costs of relationship management. A closer look at the literature reveals that the supplier selection decision has mostly been studied in environments where particular model parameters, such as lead time or product quality, are subject to random influences and thus provide an opportunity to take advantage of multiple suppliers as a means to reduce variability (see Thomas and Tyworth (2006) for a review of related literature). Intuitively, in the absence of risks, one might suspect that it may not be optimal from the buyer’s or the system’s perspective to select more than one supplier, especially if the production costs of the supplier are subject to learning effects. In this paper, we show that also in a deterministic scenario, selecting two suppliers may be better than sourcing from a single supplier. This is caused by the effect the total production capacity of the supplier base has on the total system inventory, as will be shown below. Our work is representative for a variety of industries, especially for those which rely on a high proportion of human work in the production process, such as the fashion industry or industries which use assembly lines. The remainder of the paper is organized as follows: in the next two sections, the article reviews related literature and outlines the assumptions and definitions which are used in the remainder of the paper. Accordingly, two formal models for the single sourcing/dual sourcing-decision under conditions of learning are developed and a solution method for the models is proposed. Section 7 contains a numerical study and Section 8 concludes the article.

Since many companies spend large sums on acquiring products and services from external sources, evaluating and selecting suppliers carefully may reduce purchasing costs and improve the competitive position of the company. If learning effects occur in the production process of the suppliers, the supplier selection decision influences the allocation of the order quantity to the suppliers and consequently the production costs. This paper considered a single buyer who has to decide whether to select a single or two sources of supply for a homogeneous product. Two models were suggested, one without and one with a plateauing effect, and a solution method was derived that applies to both models. The results from a numerical study showed that the supplier selection decision can comprehensively influence the learning effect at the suppliers and therewith the total costs of the system. It was also shown, in particular, that also in a deterministic scenario, selecting more than one supplier may be beneficial from a systems perspective. We ascribe this effect to the impact of the total production capacity of the system on the total system inventory, since delivering smaller lots more frequently to the buyer reduces inventory at both the buyer and the vendors. If the vendors are subject to different learning effects, we have shown that it may still be beneficial to select both suppliers, as long as the difference in the learning rates is not much. The plateauing effect we considered in our model in general dampens the learning effect. If plateauing occurs only or relatively strong at a single vendor, the relative advantage of sourcing at this particular supplier or of sourcing at both suppliers is reduced. We have further analyzed how the inventory carrying charges of buyer and vendors and the production costs of the vendors influence the supplier selection decision, and we have shown how the buyer should allocate the order quantity to the vendors in a dual sourcing scenario to maximize the benefits gained from the learning effect. The results of our paper are especially important for companies operating in high tech industries were the accumulation and retention of knowledge are of high importance. Further, our work may support supplier development initiatives, since it illustrates the benefit of an improved knowledge environment at the vendors and may thus give incentives to positively influence learning rates or reduce plateaus in the production processes of the suppliers. To increase the scope of our analysis, the models presented in this article could be extended to include further vendors to satisfy the fact that buyers often face a high number of potential suppliers who may be considered in their sourcing strategy. For a method of selecting suppliers from a supplier pool with N vendors, the reader is referred to Glock (2011). Further, it would be interesting to analyze the effect of alternative learning curves on the supplier selection decision to account for the fact that forms of learning occur in practice that cannot be appropriately described by the Wright learning curve. Finally, we have restricted our analysis to the case 0 ⩽ l ⩽ 1. Although one may assume that learning exponents with l > 1 may only infrequently be found in practice, empirical studies suggest that very high learning rates may exist (see for example Camm, 1985 and Dutton and Thomas, 1984). Thus, to increase the scope of our model, the case l > 1 could be studied in a supplier selection-problem as well (see Jaber and Guiffrida (2007) for observations on the case l > 1).