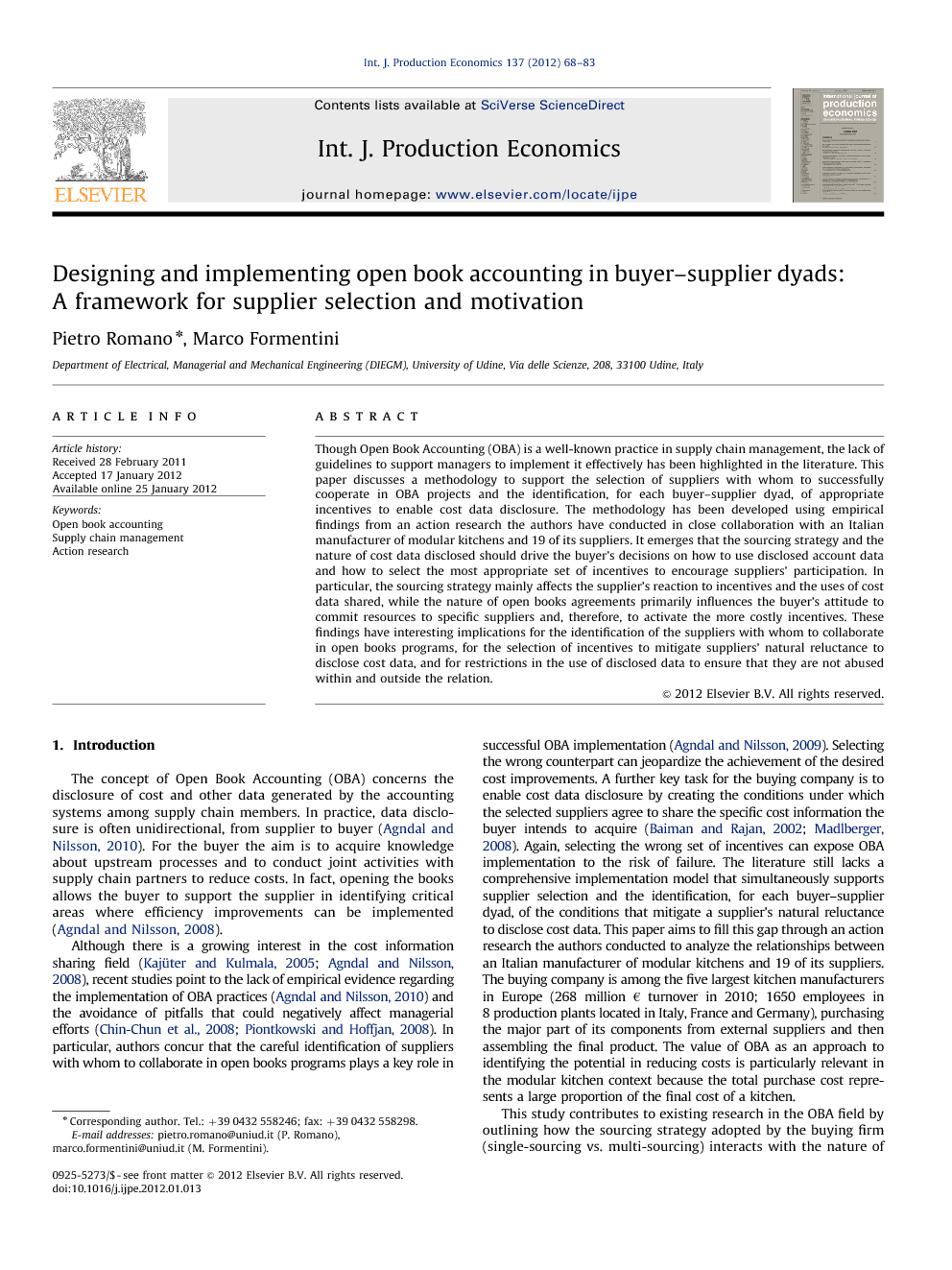 Though Open Book Accounting (OBA) is a well-known practice in supply chain management, the lack of guidelines to support managers to implement it effectively has been highlighted in the literature. This paper discusses a methodology to support the selection of suppliers with whom to successfully cooperate in OBA projects and the identification, for each buyer–supplier dyad, of appropriate incentives to enable cost data disclosure. The methodology has been developed using empirical findings from an action research the authors have conducted in close collaboration with an Italian manufacturer of modular kitchens and 19 of its suppliers. It emerges that the sourcing strategy and the nature of cost data disclosed should drive the buyer's decisions on how to use disclosed account data and how to select the most appropriate set of incentives to encourage suppliers' participation. In particular, the sourcing strategy mainly affects the supplier's reaction to incentives and the uses of cost data shared, while the nature of open books agreements primarily influences the buyer's attitude to commit resources to specific suppliers and, therefore, to activate the more costly incentives. These findings have interesting implications for the identification of the suppliers with whom to collaborate in open books programs, for the selection of incentives to mitigate suppliers' natural reluctance to disclose cost data, and for restrictions in the use of disclosed data to ensure that they are not abused within and outside the relation.

The concept of Open Book Accounting (OBA) concerns the disclosure of cost and other data generated by the accounting systems among supply chain members. In practice, data disclosure is often unidirectional, from supplier to buyer (Agndal and Nilsson, 2010). For the buyer the aim is to acquire knowledge about upstream processes and to conduct joint activities with supply chain partners to reduce costs. In fact, opening the books allows the buyer to support the supplier in identifying critical areas where efficiency improvements can be implemented (Agndal and Nilsson, 2008). Although there is a growing interest in the cost information sharing field (Kajüter and Kulmala, 2005 and Agndal and Nilsson, 2008), recent studies point to the lack of empirical evidence regarding the implementation of OBA practices (Agndal and Nilsson, 2010) and the avoidance of pitfalls that could negatively affect managerial efforts (Chin-Chun et al., 2008 and Piontkowski and Hoffjan, 2008). In particular, authors concur that the careful identification of suppliers with whom to collaborate in open books programs plays a key role in successful OBA implementation (Agndal and Nilsson, 2009). Selecting the wrong counterpart can jeopardize the achievement of the desired cost improvements. A further key task for the buying company is to enable cost data disclosure by creating the conditions under which the selected suppliers agree to share the specific cost information the buyer intends to acquire (Baiman and Rajan, 2002 and Madlberger, 2008). Again, selecting the wrong set of incentives can expose OBA implementation to the risk of failure. The literature still lacks a comprehensive implementation model that simultaneously supports supplier selection and the identification, for each buyer–supplier dyad, of the conditions that mitigate a supplier's natural reluctance to disclose cost data. This paper aims to fill this gap through an action research the authors conducted to analyze the relationships between an Italian manufacturer of modular kitchens and 19 of its suppliers. The buying company is among the five largest kitchen manufacturers in Europe (268 million € turnover in 2010; 1650 employees in 8 production plants located in Italy, France and Germany), purchasing the major part of its components from external suppliers and then assembling the final product. The value of OBA as an approach to identifying the potential in reducing costs is particularly relevant in the modular kitchen context because the total purchase cost represents a large proportion of the final cost of a kitchen. This study contributes to existing research in the OBA field by outlining how the sourcing strategy adopted by the buying firm (single-sourcing vs. multi-sourcing) interacts with the nature of cost data disclosure (detailed and frequent vs. general and occasional), the uses of disclosed data and the conditions under which data are disclosed. From a managerial point of view, the research findings have interesting implications for the identification of the suppliers with whom to collaborate in open books programs, for the selection of incentives to mitigate suppliers' natural reluctance to disclose cost data, and for restrictions in the use of disclosed data to ensure that they are not abused within and outside the relation. The paper is organized as follows: the next section focuses on the literature review, from which it emerges that there is a lack of guidelines as to how to implement OBA. The third section describes the action research process which led to the development of the proposed OBA implementation model. The following sections describe the proposed model and discuss the results. In the conclusions, we present the academic and managerial implications together with some indications for future research.