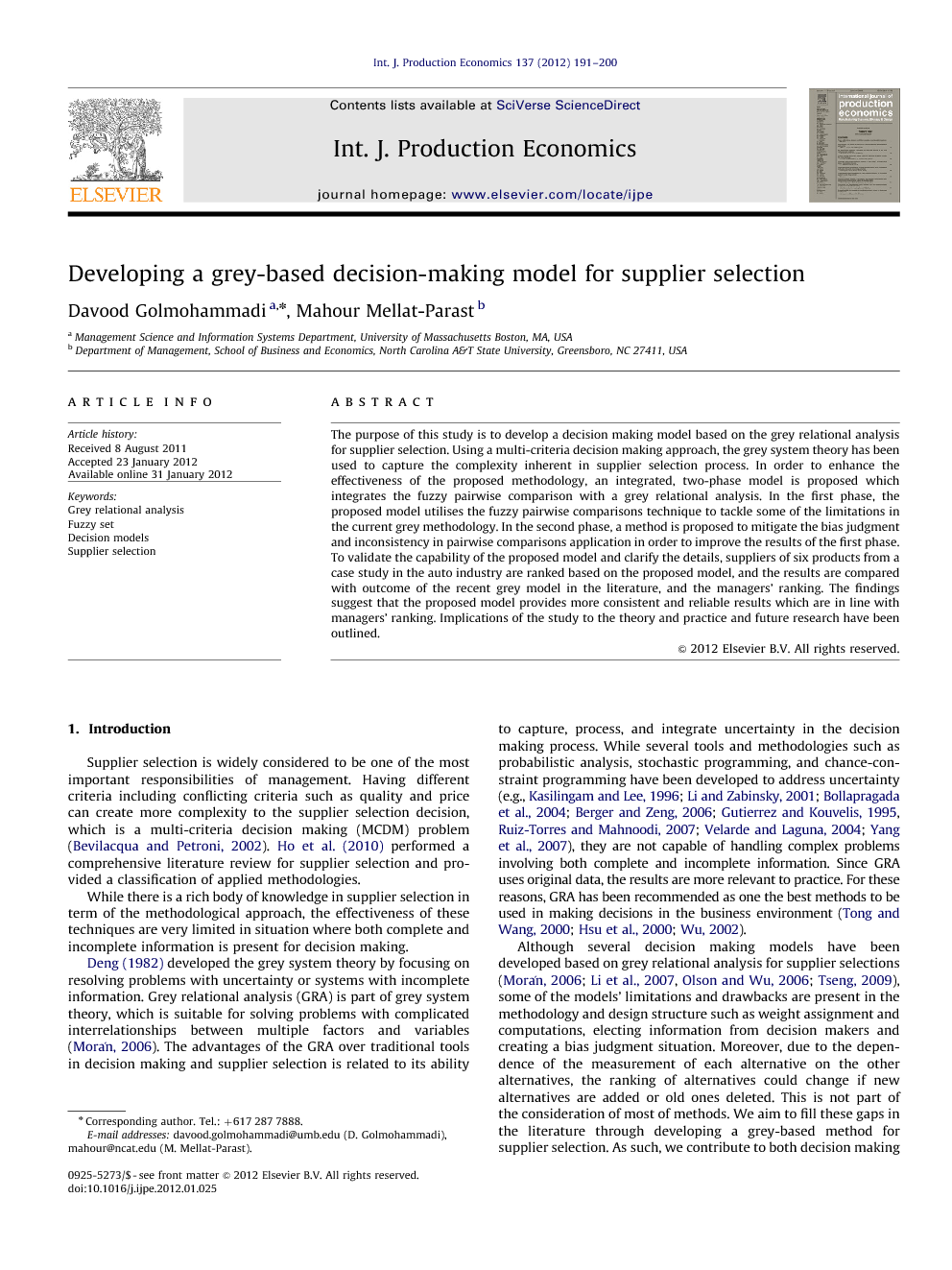 The purpose of this study is to develop a decision making model based on the grey relational analysis for supplier selection. Using a multi-criteria decision making approach, the grey system theory has been used to capture the complexity inherent in supplier selection process. In order to enhance the effectiveness of the proposed methodology, an integrated, two-phase model is proposed which integrates the fuzzy pairwise comparison with a grey relational analysis. In the first phase, the proposed model utilises the fuzzy pairwise comparisons technique to tackle some of the limitations in the current grey methodology. In the second phase, a method is proposed to mitigate the bias judgment and inconsistency in pairwise comparisons application in order to improve the results of the first phase. To validate the capability of the proposed model and clarify the details, suppliers of six products from a case study in the auto industry are ranked based on the proposed model, and the results are compared with outcome of the recent grey model in the literature, and the managers' ranking. The findings suggest that the proposed model provides more consistent and reliable results which are in line with managers' ranking. Implications of the study to the theory and practice and future research have been outlined.

Supplier selection is widely considered to be one of the most important responsibilities of management. Having different criteria including conflicting criteria such as quality and price can create more complexity to the supplier selection decision, which is a multi-criteria decision making (MCDM) problem (Bevilacqua and Petroni, 2002). Ho et al. (2010) performed a comprehensive literature review for supplier selection and provided a classification of applied methodologies. While there is a rich body of knowledge in supplier selection in term of the methodological approach, the effectiveness of these techniques are very limited in situation where both complete and incomplete information is present for decision making. Deng (1982) developed the grey system theory by focusing on resolving problems with uncertainty or systems with incomplete information. Grey relational analysis (GRA) is part of grey system theory, which is suitable for solving problems with complicated interrelationships between multiple factors and variables (Mora´n, 2006). The advantages of the GRA over traditional tools in decision making and supplier selection is related to its ability to capture, process, and integrate uncertainty in the decision making process. While several tools and methodologies such as probabilistic analysis, stochastic programming, and chance-constraint programming have been developed to address uncertainty (e.g., Kasilingam and Lee, 1996, Li and Zabinsky, 2001, Bollapragada et al., 2004, Berger and Zeng, 2006, Gutierrez and Kouvelis, 1995, Ruiz-Torres and Mahnoodi, 2007, Velarde and Laguna, 2004 and Yang et al., 2007), they are not capable of handling complex problems involving both complete and incomplete information. Since GRA uses original data, the results are more relevant to practice. For these reasons, GRA has been recommended as one the best methods to be used in making decisions in the business environment (Tong and Wang, 2000, Hsu et al., 2000 and Wu, 2002). Although several decision making models have been developed based on grey relational analysis for supplier selections (Mora´n et al., 2006, Li et al., 2007, Olson and Wu, 2006 and Tseng, 2009), some of the models' limitations and drawbacks are present in the methodology and design structure such as weight assignment and computations, electing information from decision makers and creating a bias judgment situation. Moreover, due to the dependence of the measurement of each alternative on the other alternatives, the ranking of alternatives could change if new alternatives are added or old ones deleted. This is not part of the consideration of most of methods. We aim to fill these gaps in the literature through developing a grey-based method for supplier selection. As such, we contribute to both decision making theory (through resolving the inconsistencies in the existing methodologies) as well as practice (by emphasising supplier selection as one of the core management practices). In this paper, a two-phase methodology is proposed in order to enhance the effectiveness of the current grey model application in the literature for supplier selection (Li et al., 2007). The drawbacks of the current grey model are discussed in detail. In phase one, a solution is proposed based on a fuzzy pairwise comparisons approach to enhance the weight assignment efficiency and aggregation of different decision makers' preferences. In phase 2, the inherent issues of pairwise comparisons such as bias judgment and inconsistency are discussed and a solution is proposed to enhance the accuracy of the solution developed in the phase 1. To demonstrate the sequence of the processes and improvement achieved in the proposed model, suppliers of a case study in the automotive industry are ranked based on both models (recent model in the literature and the proposed model), and the results are compared with the managers' ranking. A statistical analysis for the validation process shows that the performance of proposed model is significantly higher in comparison with the recent model in the literature. In summary, we discuss the drawbacks of the current grey model and propose solutions accordingly. We aim at enhancing the body of knowledge by proposing a decision making model; therefore, we contribute both to the theory and practice.

Supplier selection is a decision making process based on multiple criteria. The decision maker should determine a solution based on different criteria along with some uncertainty for their input and decisions. Despite the development of different tools, methodologies and techniques for supplier selection, they are subject to limitations and are not able to fully capture the complexity of the decision process. In this paper, we proposed a multi-attribute decision making model based on the current grey model that helps managers for their decisions in such situations. The current grey method for supplier selection has several drawbacks. The criteria of the current method in literature were weighted individually. Moreover due to the dependence of the measurement of each alternative on the other alternatives, the ranking of alternatives could change if new alternatives are added or old ones deleted. The other drawback of the current method was the aggregation of decision makers' preference based on a simple arithmetic mean. To overcome these drawbacks, a new approach utilising a pairwise comparisons approach and fuzzy set theory was developed in order to address imprecision in judgment for weight assignment and preference aggregation of decision makers. Moreover irrationality in fuzzy weight vectors which was not addressed in prior applications of fuzzy pairwise comparison was evaluated in the proposed model. Another contribution of our study was proposing a method to mitigate bias judgment and inconsistency in pairwise comparisons. Based on our assessment, we are confident that the proposed model can provide more accuracy in comparisons with other models which use common pairwise comparisons method. Using fuzzy pairwise comparisons can provide the promising results. Due to the dependence of the measurement of each alternative on the other alternatives, the ranking of alternatives can change if new alternatives are added or old ones deleted, contrary to the traditionally held view. In summary, the main contributions of this research were to analyse and demonstrate the drawbacks of recent grey model for supplier selection and propose solutions accordingly. The negative impact of simplification in weight assignment as one of the main segments of decision modelling, complexity of conveying human judgment as an input of modelling, enhancing the accuracy of this input (human judgment) and mitigating bias judgment and inconsistency in pairwise comparisons were demonstrated and an integrated approached was proposed. Our study contributed to the body of knowledge in grey-based theory and multiple attribute decision making modelling in several ways, and helps managers to make an informed decision regarding their supplier selection. Much potential exists for further research with more product samples, investigation on the range scale in step 8, and comparison with other decision making models. Finally, we examined the effectiveness of the proposed methodology in the context of manufacturing firms. Future studies should test whether the model developed in this study is valid in service organisations.