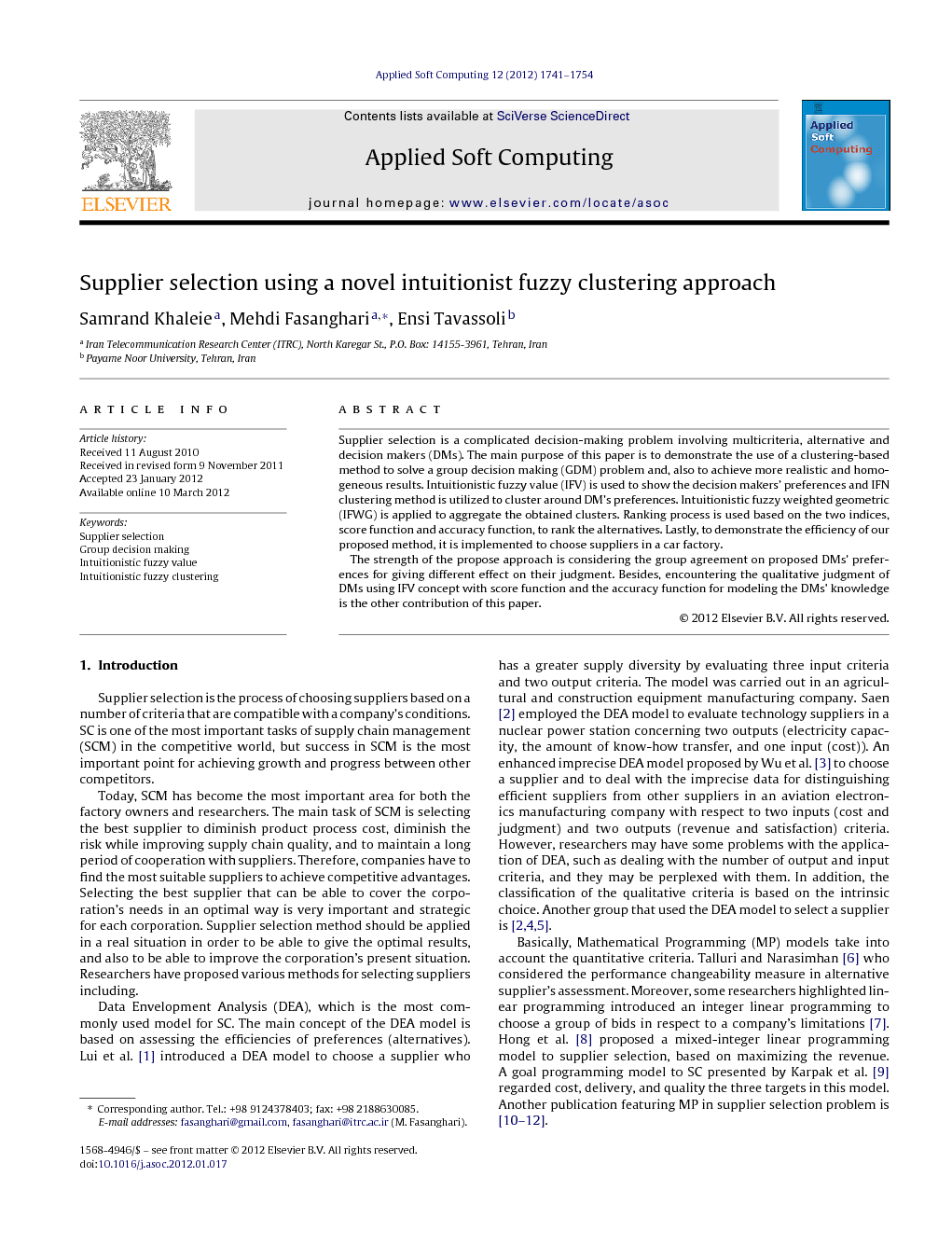 Supplier selection is a complicated decision-making problem involving multicriteria, alternative and decision makers (DMs). The main purpose of this paper is to demonstrate the use of a clustering-based method to solve a group decision making (GDM) problem and, also to achieve more realistic and homogeneous results. Intuitionistic fuzzy value (IFV) is used to show the decision makers’ preferences and IFN clustering method is utilized to cluster around DM's preferences. Intuitionistic fuzzy weighted geometric (IFWG) is applied to aggregate the obtained clusters. Ranking process is used based on the two indices, score function and accuracy function, to rank the alternatives. Lastly, to demonstrate the efficiency of our proposed method, it is implemented to choose suppliers in a car factory. The strength of the propose approach is considering the group agreement on proposed DMs’ preferences for giving different effect on their judgment. Besides, encountering the qualitative judgment of DMs using IFV concept with score function and the accuracy function for modeling the DMs’ knowledge is the other contribution of this paper.

Supplier selection is one of the most important problems in each manufacturing company. Companies, in order to increase the competitive advantage, must have an efficient supplier selection system. To this end, a clustering-based method was proposed in this paper based on intuitionistic fuzzy value, in order to show the decision makers’ opinion. The IFS clustering method is used to find the similar and dissimilar opinions for the different amounts of λ-cutting matrix. In addition, each company can use a different amount of λ, based on the importance degree. To aggregate the decision makers’ opinion, the fuzzy weighted geometric (IFWG) was applied, and for ranking alternatives, a ranking process with regard to the score function and accuracy function was used. In order to aggregate the DMs decisions, it is essential to determine the similar opinions through the experts’ results for the performance of each alternative in each criterion. Thus, it will be possible to denote the weights of the final scores of alternatives based on the formed clusters of decision makers. For detecting the hidden relation among the obtained scores of alternatives with the high uncertainty condition in decision making situations, as a basic human's characteristics, the IFS clustering is used in this paper based on four various lambda cutting methods. As a result, the different results could be achieved according to each company's sensitivity situation. The supplier selection case study of this paper consists of six decision makers, seven alternatives and eight attribute of decision making. This model is applied in more complex situations with many alternatives and extreme attribute for decision making.