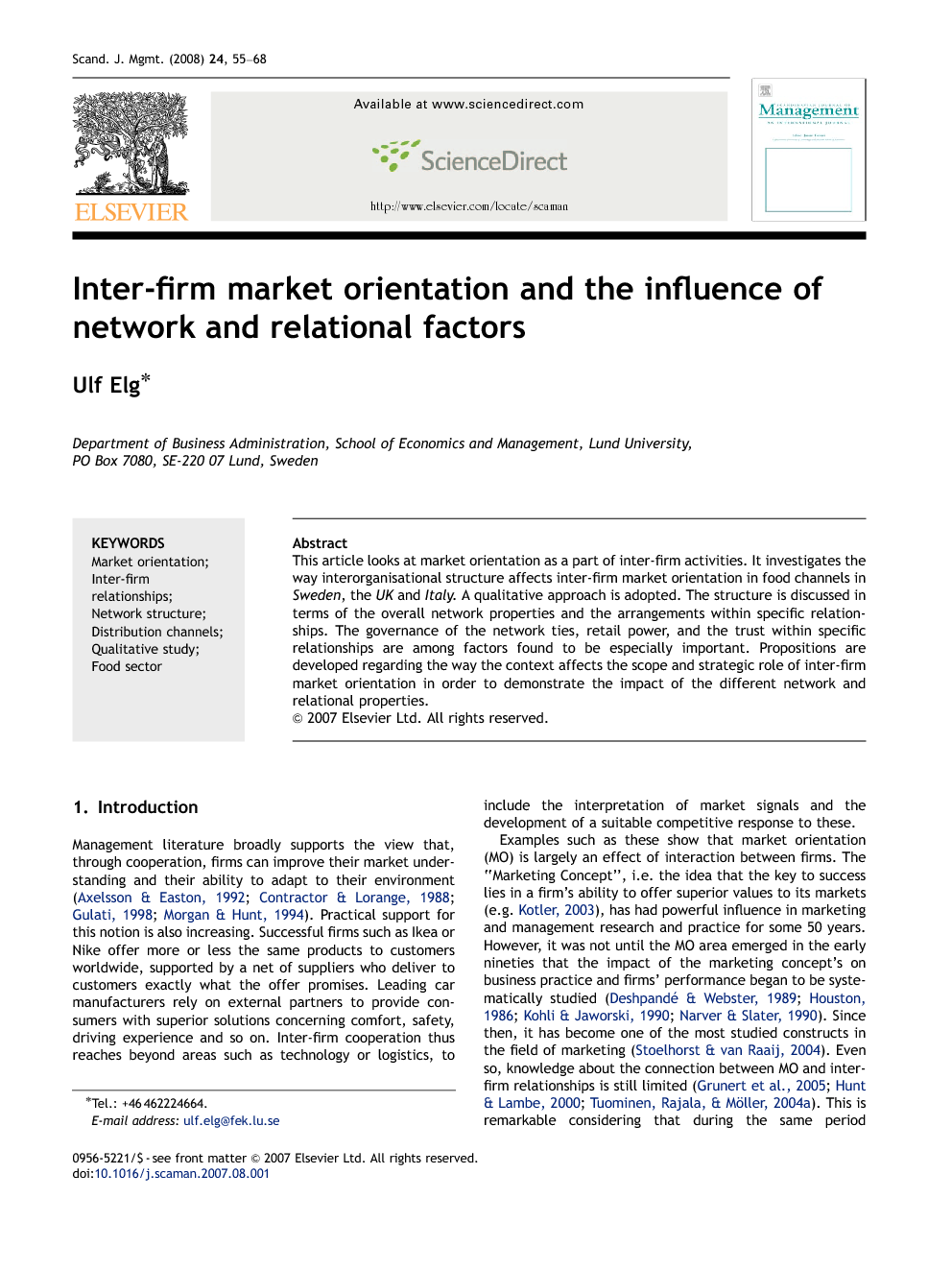 This article looks at market orientation as a part of inter-firm activities. It investigates the way interorganisational structure affects inter-firm market orientation in food channels in Sweden, the UK and Italy. A qualitative approach is adopted. The structure is discussed in terms of the overall network properties and the arrangements within specific relationships. The governance of the network ties, retail power, and the trust within specific relationships are among factors found to be especially important. Propositions are developed regarding the way the context affects the scope and strategic role of inter-firm market orientation in order to demonstrate the impact of the different network and relational properties.

Management literature broadly supports the view that, through cooperation, firms can improve their market understanding and their ability to adapt to their environment (Axelsson & Easton, 1992; Contractor & Lorange, 1988; Gulati, 1998; Morgan & Hunt, 1994). Practical support for this notion is also increasing. Successful firms such as Ikea or Nike offer more or less the same products to customers worldwide, supported by a net of suppliers who deliver to customers exactly what the offer promises. Leading car manufacturers rely on external partners to provide consumers with superior solutions concerning comfort, safety, driving experience and so on. Inter-firm cooperation thus reaches beyond areas such as technology or logistics, to include the interpretation of market signals and the development of a suitable competitive response to these. Examples such as these show that market orientation (MO) is largely an effect of interaction between firms. The “Marketing Concept”, i.e. the idea that the key to success lies in a firm's ability to offer superior values to its markets (e.g. Kotler, 2003), has had powerful influence in marketing and management research and practice for some 50 years. However, it was not until the MO area emerged in the early nineties that the impact of the marketing concept's on business practice and firms’ performance began to be systematically studied (Deshpandé & Webster, 1989; Houston, 1986; Kohli & Jaworski, 1990; Narver & Slater, 1990). Since then, it has become one of the most studied constructs in the field of marketing (Stoelhorst & van Raaij, 2004). Even so, knowledge about the connection between MO and inter-firm relationships is still limited (Grunert et al., 2005; Hunt & Lambe, 2000; Tuominen, Rajala, & Möller, 2004a). This is remarkable considering that during the same period research has shown that networks and inter-firm relationships are critical to the development of a firm's core competences and competitiveness (Day, 1994; Ford et al., 1998; Lorange & Roos, 1992; Morgan & Hunt, 1994; Varadarajan & Cunningham, 1995). As Hunt and Lambe (2000) have noted, it is essential for a firm to develop an inter-firm strategy for MO, and to build on support from its external relationships in offering superior values to the market. Previous studies have acknowledged relational aspects, but have either regarded these as antecedents to the MO of the single firm (e.g. Hernández-Espallardo & Arcas-Lario, 2003; Siguaw, Simpson & Baker, 1998), or as something to be considered when dealing with industrial customers (Helfert, Ritter, & Walter, 2002). The present article regards inter-firm activities as a specific part of MO, and inter-firm MO as the activities performed jointly by two or more independent companies to create a network or an individual relationship more sensitive to the ultimate demands of the final market (Elg, 2002). It will also be argued below that the role of inter-firm MO depends upon the nature of the inter-firm relationships and upon the general network structure in which the MO activities occur. The purpose here is thus to investigate MO empirically as an inter-firm phenomenon, and to analyse the way the interorganisational structure influences the character and degree of inter-firm MO. Interorganisational structure refers to the concentration of firms in the studied markets, the general pattern of linkages between these firms, and the nature of the specific relationships that have developed between them. MO activities in the food sector will be investigated, including the interaction between retailers and manufacturers in generating and exchanging market intelligence and in developing superior customer values. This may concern such things as category management, quality issues, product development and marketing campaigns. Particular attention will be paid to the way in which structural properties—such as the division of power, the forms of governance and trust within the relationships—influence the nature of inter-firm MO. In order to evaluate the possible impact of structural differences on inter-firm MO, a qualitative study of retailers and their relationships with suppliers was conducted on three markets with different structures, namely Italy, the UK and Sweden. This made it possible to consider whether any differences in terms of network characteristics or relationship properties appeared to be affecting inter-firm MO.

Empirical knowledge about MO as an element in inter-firm interaction is scant, despite the fact that for many firms interorganisational relationships represent a significant source of competitive advantages (Hunt & Lambe, 2000). The present article provides an empirical illustration of inter-firm MO and identifies specific types of inter-firm MO that may develop in different industry and network structures. It shows that inter-firm MO can become an important element in a channel's development of unique market values, a point that emerges from the UK study in particular. For example, it is illustrated above how the development of unique and value adding retail brands can be supported by systematic inter-firm MO activities. However, the research reported here also stresses that inter-firm MO is not an isolated phenomenon but is context related. If inter-firm MO activities are to have a part in developing unique customer values the support may be needed of a highly structured distribution system as well as long-term relationships built upon trust and cooperation even at a personal level. For firms in a more fragmented structure based on short-term market exchange, it may be more feasible to limit inter-firm MO activities to certain operative issues requiring less long-term commitment and risk-taking or the exchange of sensitive information. The article thus also emphasises that the systematic management of relationships with customers and suppliers is a necessary requirement if inter-firm MO is to become a source of competitive advantage. On a more general managerial level this study seeks to promote our understanding of the role of inter-firm MO in innovation and product development in areas such as the food sector. Historically, product development in the fast moving consumer goods area has been regarded an internal affair, but the growing rate of change and internationalisation and the multiplication of retail brands is likely to make inter-firm cooperation just as necessary here as it is in more technologically advanced industries. It has been shown here that cooperation between the actors in the value chain can strengthen the brands offered to consumers. It can also help to develop new customer services and to improve the service situation as a whole. For example, the research reported above has identified personal long-term relationships and the development of joint technological solutions in IT as important factors in promoting inter-firm MO as a relevant supportive force. It has also shown that these same factors make a positive impact on all three steps in the inter-firm MO process and has suggested that inter-firm MO can support innovation throughout the whole value chain from production to quality control. At the same time the present discussion provides an additional bridge between the network approach and consumer marketing. Several recent authors have described how a particular firm's internal MO activities can underpin business-to-business relationships (e.g. Helfert et al., 2002; Tuominen et al., 2004a). Furthermore, in the study of marketing channels it has been noted that a distribution network competes with other value chains in providing superior solutions to the final market (Frazier, 1999; Stern et al., 1996). It has also been shown here that inter-firm cooperation within a network can generate further value direct to the final customer. The importance of recognising the impact of interorganisational network structures in typical consumer industries such as the grocery sector has also been stressed. For example, the findings indicate that inter-firm MO will not become genuinely involved in developing a firm's long-term strategic advantages unless it is supported by a high level of network coordination and strong long-term relationships based on trust and cooperation. Finally, some words should be said about limitations of the study and about how it might be best to proceed from here. The study does not investigate the extent to which inter-firm MO affects the performance of the firms involved or of the network as a whole. Even if it may be assumed that, taken as an isolated phenomenon, inter-firm MO will make a positive impact on performance, it is still possible that it might have a negative effect on some of parties’ internal MO work. For example, manufacturers may invest less in internal MO activities if retailers force them to participate in inter-firm MO processes. Local and regional actors may lose some of their freedom to adapt to the needs of their specific customers in a system with a strong element of centrally managed inter-firm MO. One task for future research is thus to find a way of measuring the effect of inter-firm MO on performance. This will be especially challenging because of the difficulty in measuring performance in distribution networks and retail firms (Dawson, 2000; Geringer & Herbert, 1991; Glaister & Buckley, 1998). Nonetheless, it may be possible to study market performance using judgmental measures such as the opinions of managers in the relevant firms as regards the overall ability of the distribution network to develop market based assets and to generate customer value (McNaughton, Osborne, Morgan, & Kutwaroo, 2001). Another possible measure of market performance is the quality of the marketing strategy developed within the distribution network, as Morris and Cadogan (2001) suggested in their study of joint ventures. Another important challenge is to develop scales for inter-firm MO and to test the findings on a larger population. It may be possible up to a point to draw upon existing scales, but when it comes to considering the specific characteristics of inter-firm MO, several new indicators will probably have to be developed to cover the MO components in a network setting.